Women & Children First: Navigating Between Books as Objects and Books as Things

From its long purple awning to its brick façade, the exterior of Women & Children First has remained much the same over its nearly three-decade-long residence in the Andersonville Neighborhood of Chicago. Perhaps the only element of the storefront that regularly changes is the window display – one week encouraging readers to “choose [their] own feminist adventure,” another supporting LGBTQ rights with a pride display. The interior of the building, however, tells a different tale.

Interior of Women & Children First in 2011

Based on photographs, the interior of the store also remained much the same until February of 2015 when current owners Lynn Mooney and Sarah Hollenbeck, along with a team of staff members, completed renovations to the space. Prior to these renovations, the store was perhaps more reflective of stereotypical ideas about independent bookstores, with its hodge-podge of shelves, its cramped walkways, and its lackluster lighting. As a customer entered the shop, the sales desk greeted her, blocking her view of the merchandise and making it difficult to distinguish an intended pathway for the flow of traffic. The children’s section at the back of the store, located partially on a raised platform,  doubled as an area for author readings and other events. In this space, the mixture between the business of books and the consumption of ideas was highlighted by desks and work spaces interspersed between bookshelves.

The current view from the front door of Women & Children First is calm when compared with this. In many ways, the store has adopted a more strategic, rationalized floor plan. Tables display the merchandise closest to the door, then short shelves, with the tallest shelving near the walls. The floor plan creates a logical path for the eyes and feet to follow, instead of allowing the customer to be accosted by mismatched  shelves at different heights and angles across the sales floor. Below is a floor plan for the current layout of the store. 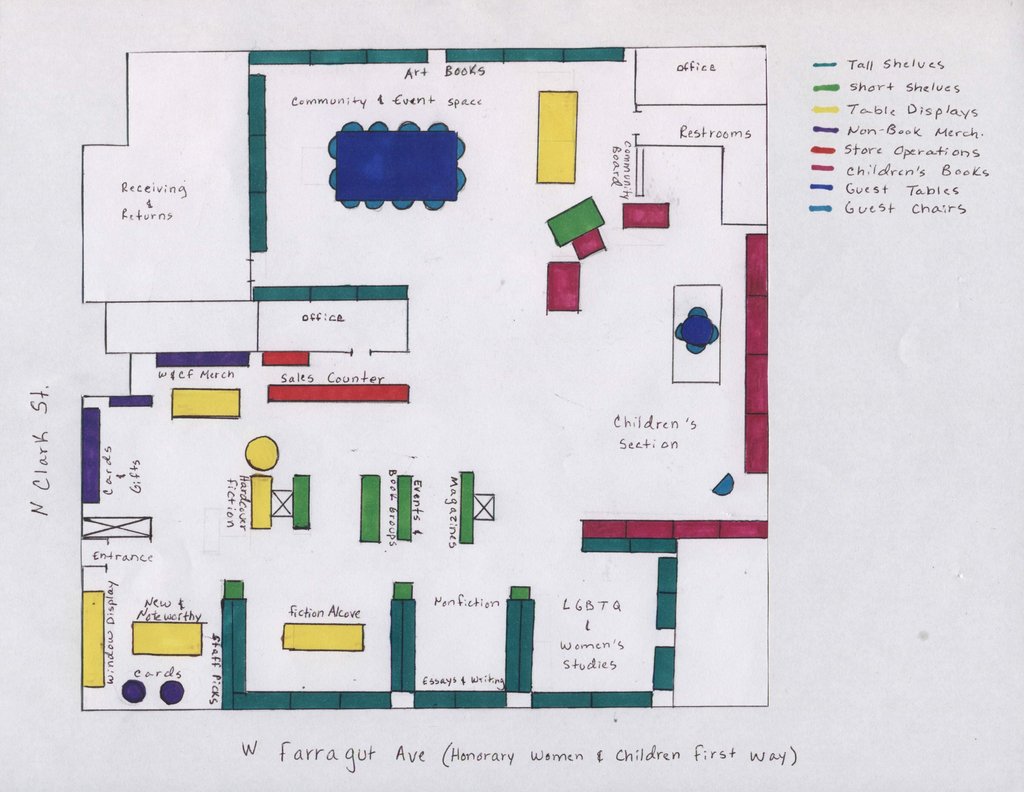 When Linda Bubon and Ann Christopherson, the founders of Women & Children First, put their store on the market, they made it clear that they would only sell to someone committed to maintaining its legacy as a feminist, independent bookstore. With their new layout, it seems that Mooney and Hollenbeck have preserved both of these facets of the bookstore, but have also moved forward with renovations that make the space more commercially viable in today’s market. The new design of the store seeks to navigate between the seemingly opposed values of business and community, capitalism and activism, between preserving the history and political nature of the store, increasing its ability to cater to members of the community, and updating the space for improved sales. In doing so, the booksellers, the collectors and curators of this place, also negotiate between viewing books as objects and viewing them as things.

Both the physical and online stores feature some staff picks also found on the Indie Next List. Many of these titles are also currently displayed at the indie bookstore close to my home.

First, in the design of the store as it is meant to sell products, we see the book treated as an object. Here I give “object” the same meaning as Bruno Latour, specifically that it is a fact, something external, as opposed to a “thing,” which encompasses the factual object but is also a “matter of concern” (2288). In other words, a thing connects an object to a subject. Currently, the first display of objects that a customer will see upon entering the store is a table of hardcover fiction, closely followed by a table of new and noteworthy titles, a fixture of both independent and chain stores. Just past this is the first “tall” shelf of the store, showcasing staff picks. The prominent position of these staff-selected titles is a mark of the store as an independent, eager to showcase its unique qualities through personalized, hand-written recommendations for books. While the store attempts to display these recommendations as unique, I have seen many of the featured titles displayed prominently in other stores, or on the Indie Next List published by the American Bookseller’s Association (ABA). In this way, the display also seeks to capitalize on strategies first developed by chain retailers. As described by Laura Miller in Reluctant Capitalists, IndieBound (formerly Book Sense) is an attempt to brand independent retailers and “beat the chains at their own game” (193).

The community & event space on the north side of the store during a recent adult coloring book night. Notice the community bulletin board in the background of the photo.

While the first few sections of the store seem constructed to appeal to the casual shopper without a specific interest in feminist issues, the final alcove, against the back wall, features LGBTQ & Women’s Studies titles. It is a section positioned for the reader who knows what she is looking for, who might bypass the flashier fiction bestsellers and head for gender studies. Similarly, the store’s other titular focus, the children’s section, resides against the back wall of the store. This area, somewhat separated from the rest by its location and the positioning of the bookshelves around it, is also distinguished by its décor, including a rainbow rug and cushions. It is also one of the two areas in the store specifically designated for community. While all events used to be held in the children’s section of the store, the remodel opened up space along the north wall to serve in this capacity instead. During readings or performances it becomes a stage, surrounded by rows of folding chairs. During book clubs or evening events like adult coloring book night, a large table fills the space.

Issues of community constitute one of the arenas of W&CF in which objects become things. To return to the front of the store, one display given prominence is that related to events and book groups. The proprietors have placed this specialized selection in an area primarily devoted to books that will appeal to a wider variety of people because these books represent more than products. These books more easily pass the boundary between object and thing and become the gathering of people that meet to discuss them. They are matters of concern, matters of subject, matters of people.

This concept sketch by designer Annie Osborn shows the area where the non-book merchandise is located in the store, to the left of the entrance, between the front window and the sales desk. It is an intentionally isolated position.

On a larger scale, the store reflects a division of thing and object in the way that non-book merchandise and work space stands separate from the rest of the store. The non-book merchandise exists almost solely in a congregation to the left of the entrance. While one purpose of this position may be to elicit impulse buys from patrons, it is also a very physical separation between items that are matters of concern and items that are not. The remodel of the store also makes a point to separate the business of books from the consumption of ideas. Whereas desks and work areas originally sat among the bookshelves, they now sit physically and visually separated from the rest of the space. In addition to convenience and reduced clutter, this separation marks the boundaries between the object-driven capitalism of the bookstore and its otherwise thing-oriented nature as a site of discussion and feminist activism. Even as the booksellers at Women & Children First take steps to rationalize and move toward selling books as objects, they cannot manage to completely divorce themselves from thinking of books as “things.”