Knights of the Long Table

There are a whole bunch of Chatty Cathy’s at Politics & Prose—and I’m not just referring to the full-time employees who love talking your ear off about their new favorite reads. (Offering personal recommendations is, after all, part of the job description.) Since the store’s cash registers and Information Desk are located front and center, no doubt the booksellers will start a conversation with you the second that you walk through the doors. And if by chance you happen to evade them, don’t worry, a large selection on the right wall toward the front of the store features “New and Recommended Nonfiction” (italics added for emphasis). But as you keep wandering, you’ll notice that the space and its contents are just as loquacious as the workers.

When Carla Cohen and Barbara Meade opened Politics & Prose in 1984, they aimed to create a place where people could share their ideas about books and important issues. Today, the indie’s new owners, Brad Graham and Lissa Muscatine, have tasked themselves with continuing this mission and positioning the shop as “a marketplace for ideas.” But Graham and Muscatine aren’t the only forces at play; the store’s interior design is also responsible for maintaining an informed dialogue.

Take, for instance, the selection of nonfiction titles within the store. When you walk into Politics & Prose and turn right, the first three sections you’ll find are Current Events, New and Recommended Nonfiction, and Biography and History. (These sections are featured above.) The particular sequence of these genres suggests a sort of collective investigation, as if the books within these categories are speaking to one another. For instance, a reader can peruse contemporary issues from a national perspective or an individual one (but, really, isn’t the personal political?) and then explore the ways in which history informed or ignored those topics.

Even more telling of the bookstore’s dedication to dialogue is the wide array of book groups hosted by Politics & Prose. The particular texts used by each group are prominently displayed in the very center of the first floor, as if the store revolves around a tradition of discussion.

When communicating with Muscatine about the bookstore’s interior arrangement via email, she quickly listed the different genres located on each floor without any mention of merchandise or additional structures. However, when talking about the lower level, she noted the presence of “a long table where our book groups meet.”

The first time I read this phrase, I thought Muscatine’s emphasis of the long table was a little silly; it seemed like such a random detail amidst the greater genre inventory. But, upon closer examination, Muscatine’s special acknowledgement of the long table signifies her pride in her roles as both a bookseller and a book collector.

In “Unpacking My Library,” Walter Benjamin writes that “inheritance is the soundest way of acquiring a collection. For a collector’s attitude toward his possessions stems from an owner’s feeling of responsibility toward his property” (66). Muscatine, as well as Graham, are the purchasers, or inheritors, of Politics & Prose, an institution that is essentially a mass collection of books. Upon acquiring the store, Muscatine said that both she and Graham “care about the role of discourse in a democracy,” a phrase suggestive of the two owners’ sense of civic duty with respect to the contents of their store. They want to use the literature within their “library” to facilitate conversation. The long table allows them to perform this task, making the object an important component of the booksellers’ collection.

Speaking of democracy, it’s worth mentioning the Washington, D.C. section within the bookstore. Since Politics & Prose is located in the nation’s capital, housing a collection of D.C.-related texts makes sense. In fact, one of the shop’s book groups called District Reads devotes itself to the discussion of books specifically about the capital and its history.

These D.C. texts call to mind a quote from “On Collecting Art and Culture” by James Clifford. He writes about the formation of a sense of self through literal and figurative entities, stating that “identity is a kind of wealth (of objects, knowledge, memories, experience)” (218). The D.C. books at Politics & Prose constitute a form of social commentary on Washington, D.C. identity, suggestive of the ways in which residents view themselves, their city, and their collective history.

This commentary becomes even more telling when you realize that, at one point, the Washington, D.C. section contained Obama bobble heads. This kind of merchandise speaks to the capitalist ideologies underlying the bookstore as an economic institution, nuancing Muscatine’s aforementioned portrayal of Politics & Prose as a “marketplace” for the exchange between goods and currency.

Bill Clinton Chatting with a Customer at Politics & Prose

In an attempt to push the dialogue even farther, Politics & Prose holds about 400 author events annually. (Keep in mind, there are only 365 days in a year.) Many of these events are book readings followed by Question and Answer sessions. Past visiting authors include former U.S. President Bill Clinton and nonfiction writer Patti Smith, and book subjects range from education to climate change to the Middle East. Understanding that guests have historically leaned toward the left, Graham and Muscatine make a conscious effort to host more conservative authors. In this way, they can craft the most robust, comprehensive, and inclusive discourse.

The Question and Answer sessions during these events are crucial for the flourishment of healthy conversation, serving as an invitation for both authors and readers to debate and discuss relevant, contentious topics. In this way, the people frequenting Politics & Prose become part of the store’s collection. Benjamin notes that a book collection is a “living library,” and the guests of Politics & Prose are an integral part of the bookstore’s vitality (66). Along with the words within the texts themselves, the people of Politics & Prose quite literally give the bookstore its voice.

So, with all this emphasis on political discourse, why the heck does Politics & Prose carry such a large selection of greeting cards?

Yes, that’s correct, greeting cards. Shelves full of colorful cards appear toward the back of the store, waiting to be purchased by customers. The inclusion of this type of merchandise seems really strange—until you realize that a card is a form of verbal communication between a sender and a receiver, just as a book is one between an author and a reader.

The presence of so many greeting cards reminds me of a line from Reluctant Capitalists. Quoting an indie bookseller, Laura Miller notes that the independent bookstore “functions… as a place, in this society, to exchange ideas in a way that nothing else does” (220). The same is true for letters. Many writers throughout history, including Samuel Richardson (1689-1761) and Mary Shelley (1797-1851), have used the epistolary format when composing their works. Centuries later, authors are still writing in this style—evidenced by this neat article about contemporary epistolary novels. Politics & Prose represents this literary tradition—using books, and greeting cards, as a type of correspondence and a medium for intellectual exchange. 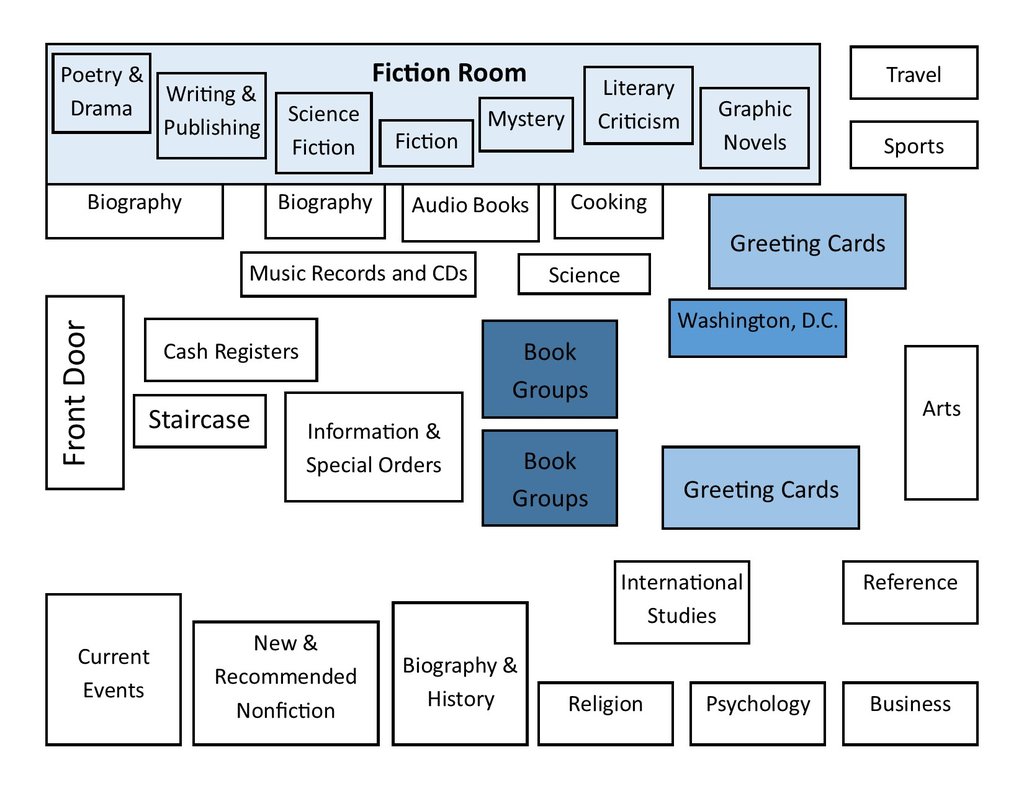 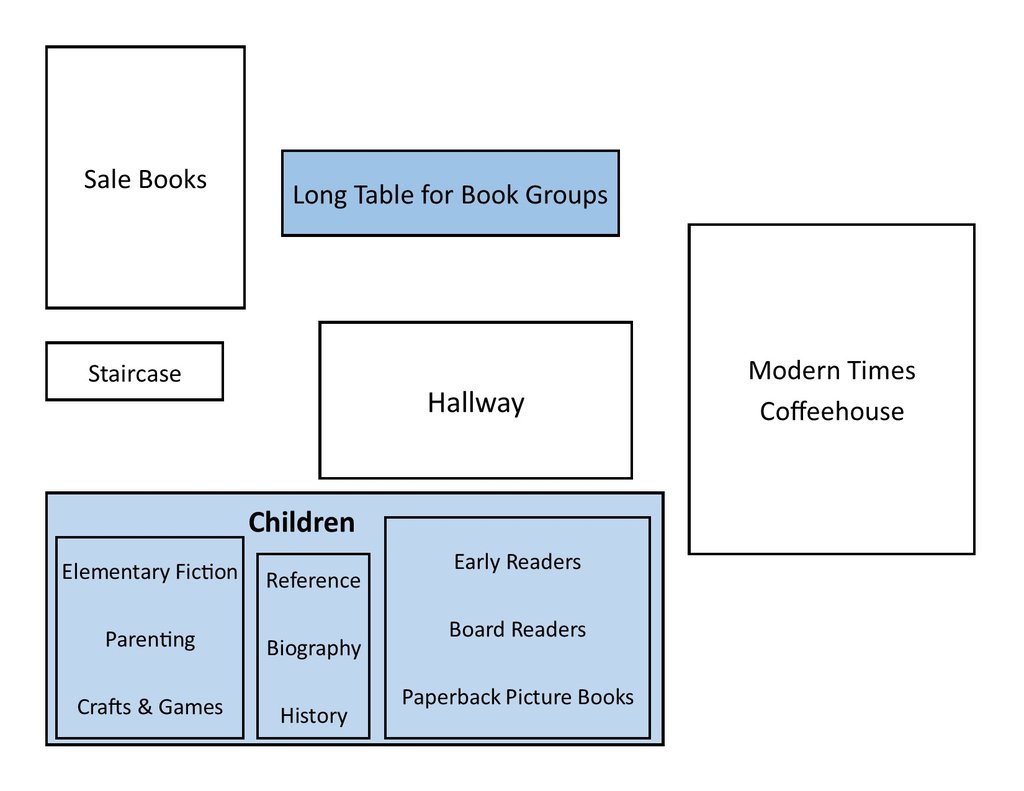