“A Kind of Library Where Books are Sold”

Being a poet the first section that I always seek out in any bookstore is the poetry section, and with my exploration of City Lights the same was true. I  learned from reading the City Lights Bookstore webpage that their poetry is upstairs, and the Beat Literature is also kept there. I did my best based on photographs that I found from extensive googling to reconstruct the layout of this room. When looking at my rough layout here, keep in mind that I am not an artist and that triangles are chairs, circles are tables, blue circles have text if you hover over them, and the small landscape icons are pictures if you hover over them. I recommend starting at the stairs and going counter-clockwise but feel free to hover in your  own direction. 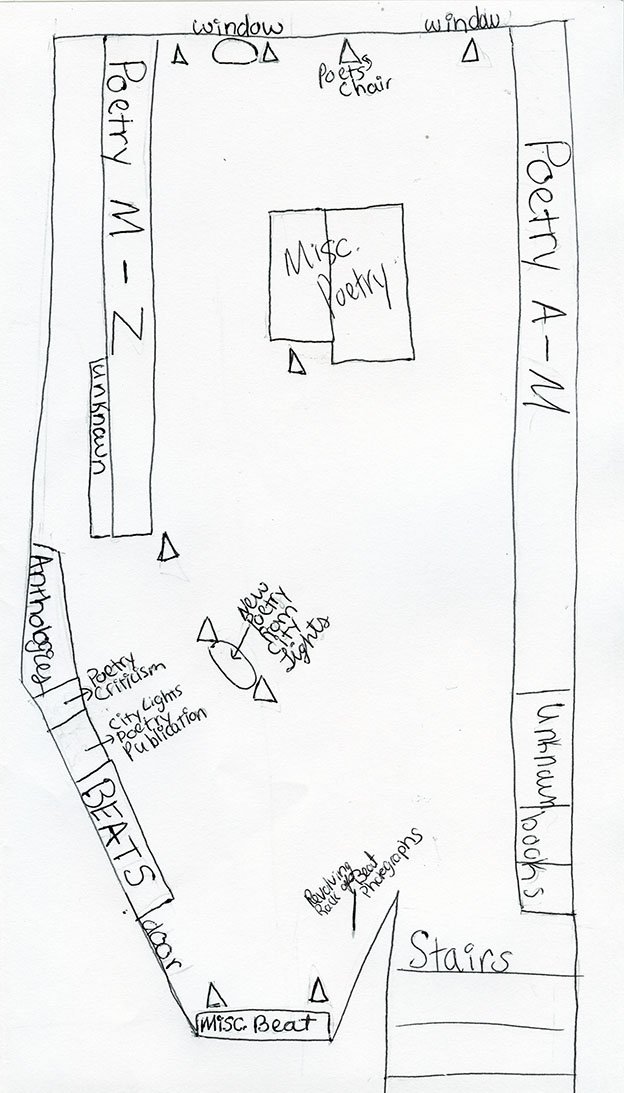 To even get to the poetry room in City Lights, you have to either know where it is or see one of the signs that says “Poetry and Beat Literature Upstairs,” and pointing in the stairs direction because the stairwell that leads to the upstairs is buried in the back of the main level. Without the signs you’d probably look at the stairwell and think it was off-limits.  This might strike some people as a little strange, but having been to small, quiant little bookstore in Bushmills, Northern Ireland, which had their poetry upstairs too it doesn’t really phase me. But why is poetry and Beat literature up there, what’s the method behind the madness?

A basic way of interpreting this is that poetry and Beat Literature are considered above all the other types of literature carried in the store, so they are elevated and placed away from the other literature. If a person getting “an old book is its rebirth” this means that us readers give a book its meaning

and cultural context, then the books of poetry and the Beats are, by the placement of their shelves being upstairs, more important (Benjamin 61). If a collection is no more than a “disorder to which habit has accommodated itself” then certainly these books are the collection of those who keep City Lights, for of course they would elevate Beat Literature above all else being Beatniks themselves (Benjamin 60).

Could it all be that this bookstore considers it’s books a collection, possessions, treasure, so that they feel a level of   “responsibility toward [their] property” and thus they keep it separate from the casual browser (Benjamin 66). Let’s be honest for a moment, if I were told that say mystery novels were kept upstairs I probably wouldn’t bother going up unless I was really looking to kill some time. Why? Because I just don’t care enough about that genre to seek it out. I bet a lot of people would feel the same way about their own preferred genres. So, at City Lights, it is only those who are seeking poetry or Beat literature that are the ones who will seek it out.

The room itself functions in what seems to be a logical and inviting way. Chairs are generously located near the shelves of books. The shelves are clearly labeled, and they are all consumer friendly in their organization. The two large shelves of poetry are organized alphabetically, making it easy for

browsing as though in a library since only a few have the cover facing outward. There are even little signs hanging off a couple of the shelves with suggestions on “poets to read,” such as George Oppen, giving  a brief description of the poets work and their life.

The other major set of shelves, the Beat Literature section, is completely opposite. There is no clear alphabetization going on, but what is clear are the covers. The covers of the Beats books shine at you from the shelves as the vast majority of books are situated with the covers outward. They call out for your attention with their bright and image-filled eye-catching covers. Even the simple black and white covers of the Poets Pocket Series books on the top shelf catch your eye because of the contrast between their simplicity and the loudness of the other covers. These things are trying to claim your attention, to matter. They are the objects of the Beat Generation, these books, expressing their things, their ideals, and up there in that room they want you to see them and pick them and read them (Brown 9).

They have signs saying so. There is probably one on every wall that says “read here” in some way or another. Chairs are littered all over the space too, so you can grab a seat and read, as one sign says. It’s almost like a library, all the shelves neatly organized, chairs for you to settle down in and read a good book. There’s a sign suggesting that about the space too.

But could you really get comfortable in those chairs? Every chair upstairs is wooden, with not a cushion in sight. Here again I think we see a discouraging of the casual browser: since City Lights is a bit of a tourist hot spot for San Francisco, those tourists are going to want to browse the Beat Literature and will probably make that journey upstairs. They are invited to browse, to even read, but only those able to ignore the feel of those wooden chairs will feel at comfortable enough to stay for any period of time.

That’s just it though, they have to go upstairs to find it. These great objects, great works of the Beats are put away. Sure they are elevated above the other works of literature alongside poetry, but you have to go and find them. How important can those books really be if they aren’t prominently displayed downstairs in the main area where everybody who comes in can get at them easily? Have the Beats perhaps passed from being a matter of concern to a matter of fact, as Latour would say? Somehow, I think not. Things, matters of concern, must be “gathered together first in order to exist later as what stands apart” (Latour 2291). City Lights by gathering together the Beat Literature and poetry is allowing them to stand apart just as they always have.