A Look Back at Gotham Book Mart: Place and People

The Gotham Book Mart was a hub for avant garde literature and a center of culture for the 87 years that it was in business. There were many factors that contributed to the success, popularity, and importance of Gotham Book Mart: the literary climate of the early- and mid- 20th century, its location in the heart of New York City, the demand for banned or censored books, the need for a physical location for these cultural figures to congregate, and so on. But beyond all of these factors, one person stands out as being undeniably instrumental to the success of Gotham Books: Frances Steloff. Now, it would be misguided to suggest that one person could be the sole cause of Gotham’s success; there were many ingredients that went into the mix. However, Steloff’s ambition, persistence, and business-savvy was the king pin that held the other pieces in place. Even after she sold the Gotham Book Mart, the spirit of her bookshop largely remained the same. As a result, much of this post will focus on the ‘place and people’ of Gotham Book Mart’s past vis-a-vis Frances Steloff. 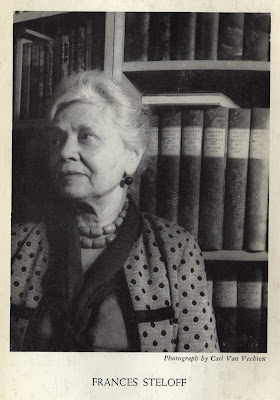 Frances Steloff was born in 1887 to a poor immigrant family in Sarasota Springs, NY. She attended school until the the seventh grade when she was removed in order to work for a family in the Boston area. In 1907, at the age of 20, Steloff moved to New York City, where she found work at Loeser’s department store selling corsets. Soon after starting work at the department store, Steloff was put in charge of the store’s magazine/book section, and within a year doubled the department’s sales. Despite the negativity that  surrounded book-selling in department stores around WWII, and the criticism these stores faced from people in the book industry (Miller), Steloff’s position at Loeser’s is what enabled her to find her calling as a purveyor of the written word.

In 1920, after working at an assortment of publishers in the city, Steloff opened the Gotham Art and Book Mart at 128 W 45th street in the theater district. This was a bold move for a woman during this time: most women in their thirties were settling down and focusing on establishing a domicile and a family; Steloff, on the other hand, was venturing into the world of business. In Gotham Book Mart’s early years, the shop served as a place for actors and people involved in the theater world to congregate and purchase literature. Steloff recognized that the location of the store, in the theater district, would define much of the business and clientele of the shop, and as a result she fostered this community of patrons by stocking rare and obscure plays. After three years on 45th St., however, the store moved to 51 W 47th street, where it changed its name to the shorter “Gotham Book Mart” and erected its famous “Wise Men Fish Here” sign. At its new location, the store developed a reputation for stocking avant garde and banned books—such as Tropic of Cancer and Lady Chatterley’s Lover—which drew literati and the culturally curious alike. This location was also where the tradition of Gotham Book Mart “garden parties” started, which began as a series of lectures but eventually became occasions for book releases. Literary celebrities and major cultural figures would attend these parties, and at its height Gotham was hosting more than 40 per year. 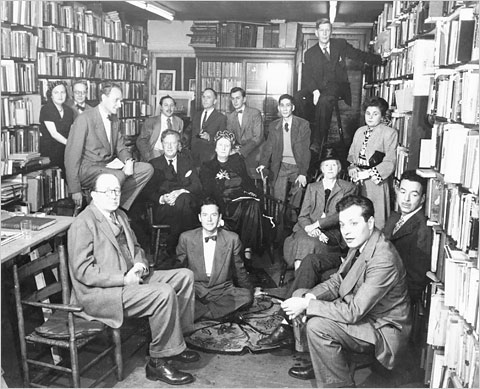 A household name in an unlikely neighborhood

In 1946 Gotham Book Mart moved to 41 W 47th street, the location the store would call home the longest (58 years) and where the store established its broadest community of writers and notable cultural figures (W.H. Auden, Marianne Moore, and Dylan Thomas were all frequent patrons at this location). Steloff was also deeply invested in fostering the growth and promotion of up-and-coming artists—she shared Tebbel’s belief that “as the middle[wo]man…the bookseller is not only the conduit between author and audience, but in the conduct of business [she] is in a position to influence that relationship profoundly, whether for good or ill” (in Steloff’s case, it was clearly for good). She continued to host book releases and took risks on authors’ first works, as well as starting a “Writer’s Relief Fund,” which aimed to help writers in financial need while by accepting donations from established artists and patrons. (The project, however, was not very successful due to the large number of beneficiaries and the small number of benefactors). Steloff also hired up-and-coming writers and artists to work at her store, such as Allen Ginsberg, LeRoi Jones, and Tennessee Williams (though Williams only lasted one day). 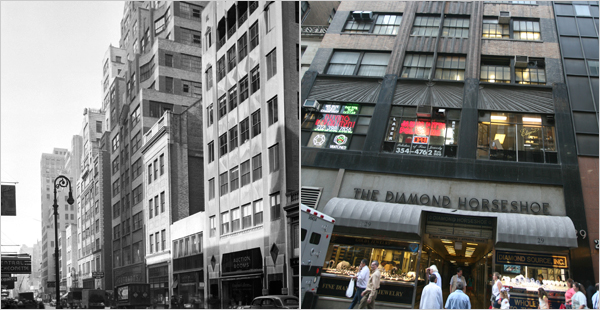 Although business proliferated at the store on 41 W 47th St., Gotham Book Mart’s success in this neighborhood is in some ways a surprise. The address of 41 W 47th St. is at the heart of the Diamond District, an area of Midtown Manhattan with a high concentration of diamond and jewelry retailers. During the 1940s, the Diamond District saw a boom in business with the influx of Jewish diamond dealers who were forced to flee Antwerp and Amsterdam during WWII. In a neighborhood that specialized in diamonds and jewelry, and at a time when business was thriving, how is it that Gotham Books managed to be so successful in such an unlikely environment? I would posit that this success was largely due to Steloff and her determination as the shop’s owner. A shrewd business woman who poured her life into her store, she embodied the archetype of the passionate bookseller whose goal is to create a flourishing community and to adapt to the needs and demands of her customer base.

The sale of Gotham and its late decline

In 1967, at the age of 80, Frances Steloff sold Gotham Book Mart to Andreas Brown. After its sale, Steloff remained a ‘consultant’ for the bookstore and a constant present in the shop. Though Gotham Books remained an important cultural landmark and a major independent bookstore, its position as a meeting place for high profile artists and intellectuals began to wane. There are two factors that largely contributed to this decline: notable cultural and literary figures were less present in the community around the bookstore, and the store saw a gradual resignation from Steloff as she aged. Without a strong constituency of cultural figures in and out of the shop, and with the woman behind the scenes unable to field new authors and cultivate a community based around literature and learning, the store’s struggle seemed inevitable.

Gotham Book Mart remained open long after its sale to Brown; even after Steloff’s death in 1989, the ex-owner’s lingering spirit likely helped keep the store open for close to another twenty years. Even if the Gotham Books was no longer a meeting place for elite literati and artists, the place remained “a locus of collective memory—a site where [an experience] is created [for the consumer] through the construction of memories linking a group of people into the past” (Harvey).

During the 1990s and early 2000s, Gotham Books ran into legal issues over the building on 47th St. In a last-ditch effort to keep their doors open, Gotham Book Mart moved to 16 E 46th St. in 2004, but would only remain in this location until 2007 before closing for good.