A Niche in History: Giovanni’s Room through the Years

Giovanni’s Room Through the Ages on Dipity.

Since its conception in 1973, Giovanni’s Room has situated itself firmly within the developing LGBT rights movement as an important cultural space. As its historical marker suggests, with both its mere presence and its actual description, the bookstore has been a refuge for LGBT community members and supporters for upwards of thirty years. Its location in the Gayborhood of Philadelphia has allowed it to grow alongside the movement, as well as shape it through the knowledgeable dissemination of LGBT literature and support.

One may ask which came first: the Gayborhood or Giovanni’s Room? The answer to that question is perhaps neither – the two have feed off of and developed alongside one another since the seventies. Indeed, the bookstore’s website boasts that Giovanni’s Room has been “paralleling the growth of Philadelphia’s ‘out’ community and the expansion of publishing in certain areas” since it was founded. Ed Hermance, owner of Giovanni’s Room, attests this parallel to luck, saying that they just happened to start up at the same time that gay and lesbian publishing began to increase (Flynn). His store has been part of the enormous shift in attitudes that Philadelphia, and indeed the nation, have experienced since the seventies in terms of the LGBT rights movement and the public opinions held about members of that community.

Hermance talks of a time early on in the history of Giovanni’s Room when the store and its owners experienced a great deal of ridicule and abuse. Even in Philadelphia, which Hermance describes as a “fairly relaxed, live-and-let-live city,” the attitude towards the LGBT community was still starkly different in the seventies than it is today. He weaves tales of people breaking in through windows during the night, yelling “faggot” and “queer” as they sped by in their cars, and throwing bricks through their windows (Schechner and Flynn). The bookstore was forced to move around multiple times in search of a place that they could afford that was willing to rent space to a gay and lesbian bookstore. They did not settle into the current location on the corner of 12th and Pine until 1979, six years after their business was started (Flynn). They moved from their first location on South Street to Spruce Street after just a few years, and were not well-received on Spruce Street. Hermance recounts how the landlords of their space on Spruce Street refused to even come into the bookstore, and instead would yell things at them from the hallways (Flynn). According to Hermance, they have not had this kind of disturbance for ten years now as a result of a major change in attitudes towards the LGBT community.

Luckily, however, the close connection that Giovanni’s Room had with its community (both the immediate community surrounding the store as well as a LGBT community members in general who supported the bookstore) aided in helping them eventually find a comfortable fit in their current location back in 1979. Thanks to a “long history of customer support,” Giovanni’s Room was able to raise money to be able to pay for the expensive space on 12th and Pine, the only place they could find that would willingly accommodate their presence (Schechner). They saw this customer support again when the store needed to replace a wall recently. Hermance reported that as of October of 2011, $47,000 had already been raised to pay off the $50,000 dollar wall repair on the building (Schechner).

Before settiling on the cozy corner of 12th and Pine, Giovanni’s Room had to move around the city a few times to find a home and willing (and respectful) landlords. View Giovanni’s Room – Locations in a larger map

The loyalty of the community is undoubtedly the result of the importance of Giovanni’s Room as the LGBT movement started to gain more and more followers back in the seventies and eighties. After finding a suitable location in the Gayborhood in 1979, Giovanni’s Room found itself at the heart of LGBT pride celebrations that would become some of the biggest in the nation, like OutFest and PrideDay.

Outfest in Philadelphia, structured like a block party, is an event intended to bring the LGBT community together and provide support.

According to Philly Pride, OutFest occurs every October in conjunction with National Coming Out Day (NCOD). It’s a celebration unique to Philadelphia, and happens in the Gayborhood. The idea for OutFest was inspired by the second march on Washington on October 11, 1987, and in 1990 Philadelphia became one of the first cities to organize an event for NCOD (Philly Pride). Since then, OutFest has become the largest NCOD even in the world, and is a huge community event. Many local businesses in the Gayborhood get involved, like Giovanni’s Room, and attendees are treated to a giant flea market, carnival attractions, entertainment, and plenty of community bonding. The purpose of the event, as described by Philly Pride, is “the advancement of LGBT rights through the visibility and awareness that our parades and festivals create,” and to reach out to the LGBT community at large to provide support. Today, this event attracts nearly 40,00 people every October. Giovanni’s Room, both because of its mission and its location, has been an important participant in OutFest since it began. It was during the 2011 OutFest that Ed Hermance unveiled the historical marker outside of Giovanni’s Room.

The historical marker, hidden under a rainbow flag, is unveiled during OutFest 2011.

Ed Hermance reveals a wall display that the community helped to fund during OutFest 2011.

Other pride events like the PrideDay parade in June also happen in the Gayborhood. PrideDay was first an impromptu event at the end of the eighties, and eventually became the largest pride parade in the region (Philly Pride). It now attracts close to 25,000 people every year. So many of these events in Philadelphia started in the eighties or nineties, right around the time that Giovanni’s Room found its home at 12th and Pine, right in the heart of the Gayborhood. This allowed the bookstore to firmly establish itself as a part of the pride events and LGBT rights movement, making it not just a gay and lesbian bookstore, but an important actor in the social movement, as well as a haven for the gay and lesbian community and the allies.

In the last 5 or 6 years, however, the number of niche bookstores like Giovanni’s Room, stores with a specific focus, has been dwindling fast. Booksellers who previously owned niche bookstores have either been closing or shifting their focus to make it more general, thereby appealing to a larger number of people and making a larger profit (Kirch and Rosen). Kirch and Rosen provide the example of a women’s bookstore owned by Sandra Torkildsen, who claimed that to be able to survive she had to become a general bookstore, though her store “will always specialize in feminist and GLBT titles’ (Kirch and Rosen). Another bookstore in Rehoboth Beach, Delaware chose not to generalize their titles, but instead to broaden the types of products they carry, adding “gifts, cards, music, videos, and Human Rights campaign products to the inventory” (Kirch and Rosen). And, in September of 2013, Ed Hermance announced that he intends to sell Giovanni’s Room as well. Hermance hopes to find a successor who will “carry on the store’s legacy business,” but there is nothing definite yet (Timpane).

The disappearance of niche bookstores like Giovanni’s Room is particularly problematic in terms of a bookseller’s place within the political system. Being a gay and lesbian bookstore during a time of a drastic shift in attitudes about LGBT rights, both governmentally and socially, this particular bookstore has definitely had an important political role, which is what led to it being recognized as a historical landmark. Had Giovanni’s Room been just a general bookstore, it would not have been able to have had such a role in the making of history, simply because its mission would not have been as relevant to the social movement. Archibald MacLeish comments on the power of the bookseller in A Free Man’s Books, stressing the importance of a knowledgeable seller at the helm to disseminate important information through books. He talks about how books can be really politically important, and since he is commenting around the time of the second World War, says that had certain books been more popular on the market, they “would have given the people of the country some understanding of the dangers they faced” (MacLeish 10). He credits the book-trade with a certain responsibility to help form public opinion, and puts the onus on the bookseller in particular to know “his books and his customers” in order to be persuasive (MacLeish 14). 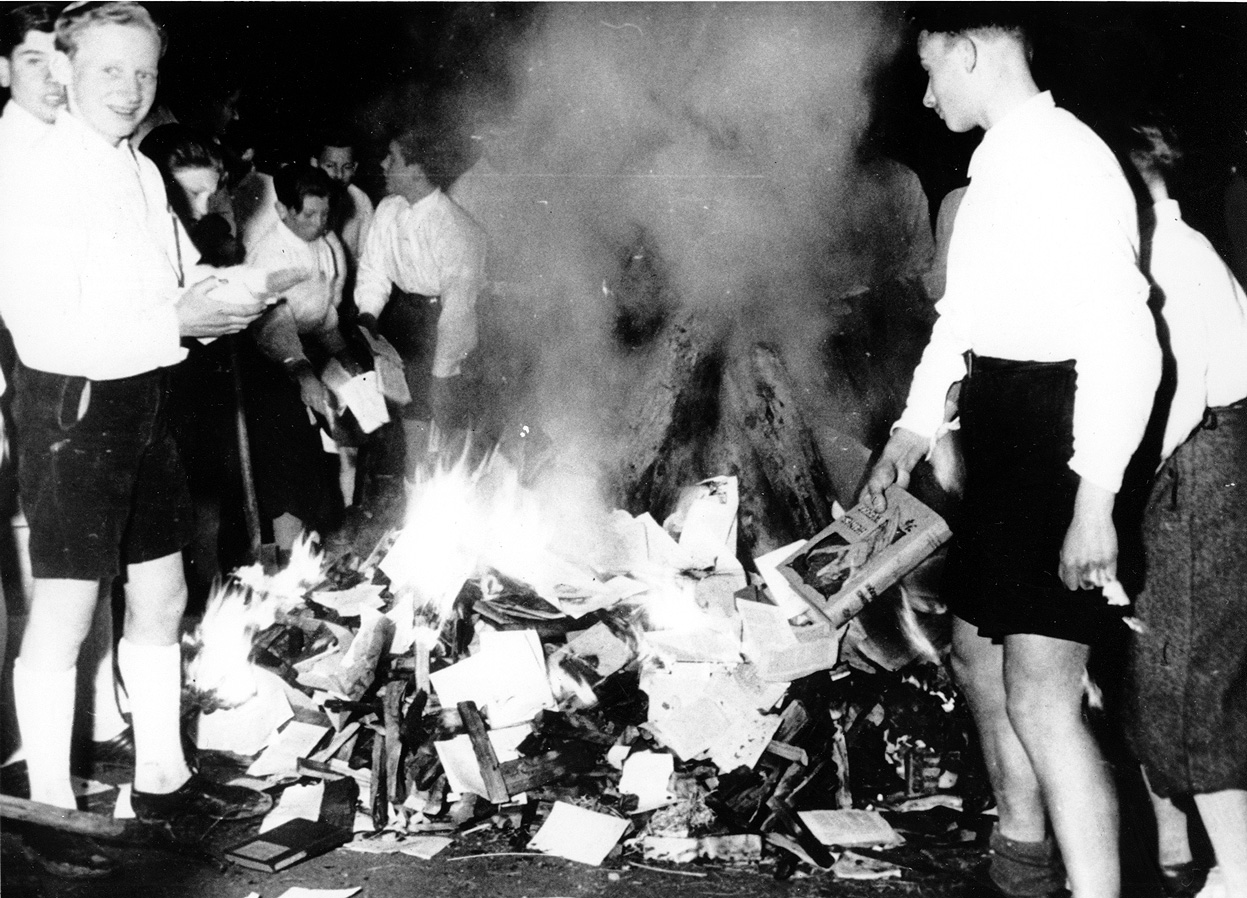 Nazi Germany saw a lot of book burning as a way to control the masses and limit their ability to think, illustrating MacLeish’s point about the power of the book and the necessity of the bookseller to distribute important information to the population.

It is for this reason that niche bookstores like Giovanni’s Room are so important. Giovanni’s Room specifically is comprised of a very knowledgeable staff who are able to tailor their titles and recommendations to the customer and the focus community in order to provide support and guidance that is truly significant. The official website of Giovanni’s Room has a long description of how their store is different from general superstores that have LGBT sections, saying that those big bookstores are full of impersonal titles and staff that are not well-versed in the subject. Laura Miller, too, discusses the importance of the bookseller, outlining their descent from “mind doctors” in the early part of the twentieth century to removed sales clerks in today’s day and age. She notes that booksellers used to be taken more seriously when they “became a guiding force in their customer’s reading habits,” a similar sentiment to MacLeish’s about the responsibility of the book-trade (Miller 57). In the past 40 years that Giovanni’s Room has been in business, Ed Hermance has accepted his responsibility as a bookseller to influence public opinion (he has even acted as the mayor’s liaison to the LGBT community, according to Schechner), and has exhibited a profound dedication to the mission of his niche bookstore. Giovanni’s Room has been an important part of the history of the LGBT rights movement, and only time (and a buyer with the same dedication as Hermance) will tell if its influence will continue, or if it will dissolve into the homogeneity of the generalized bookstores of America.