A Walk Through The First Location Of Gotham Book Mart

The original location of Gotham Book Mart, also referred to as GBM, was a small basement space on 128 West 45th Street near the theater district in New York City, New York. It was originally called Gotham Art and Book Mart. The space for the store was on the right side of the street, Hudson Theater was a couple of doors away, Lyceum Theater was across the street, and next door to the original shop was Claire’s dress shop.

Steloff talks about the first time that she toured the space saying, “I asked the woman there about the space, and she took me around the back way. As she stood in the doorway between the two rooms-one had been the dining room, the other the kitchen with a huge built-in stove still there partly boarded-up.  It was a brownstone English basement, three steps down, which was set back between two remodeled buildings. I looked in the window, which had an old cloth stretched across the inside. The door was also draped…if I would want the back room later on, it could also be arranged.  Here at least I would have the front room and the window, small though it was, entirely to myself” (Steloff 749-750).  In the shop, it is said by the owner that “only the west wall of the room had shelves-that was all I could afford.  On the opposite side, next to the fireplace, was a bookcase which I had brought from my own apartment, and there was a rather long table spread with books” (Steloff 755).

“We took everything that could be used in the shop: bookcases, table, desk, chairs, pictures, and books.  I spent the day arranging the books to make the best showing, as there weren’t enough to fill half the shelves on the one side. The opposite wall had a fireplace with gas logs and a marble mantle, my bookcase on one side and a borrowed bookcase on the other, and above them prints” (Steloff 751).  Frances Steloff made her bookstore feel like a home away from home to her customers.  She created a store ambiance that made her clientele feel like “house guests in a relaxed yet exciting enviroinment” (Miller 94).  David came in the evening, and I went out for food. He brought some old novels the salesmen had given him as they were published. They helped to fill the empty shelves. The next morning the sign was put up and I was ready for business” (Steloff 751).  Steloff goes on to write, “Gordon Whyte was one of the earliest friends of GBM. He came in a week or two after we opened and was delighted to find an out-of-print book that he had been searching for for years. He looked over all the books I had. Only the west wall of the room had shelves-that was all I could afford. On the opposite side, next to the fireplace, was a bookcase which I had brought from my own apartment, and there was a rather long table spread with books. It didn’t take Gordon Whyte long to look over my stock” (Steloff 755).  For what the collection lacked in quantity, it made up for in quality.  Steloff’s customers stayed true to her, and her store, and returned many times to purchase books and to enjoy Steloff’s company.  Below is the floor plan for the first location of Gotham Book Mart. 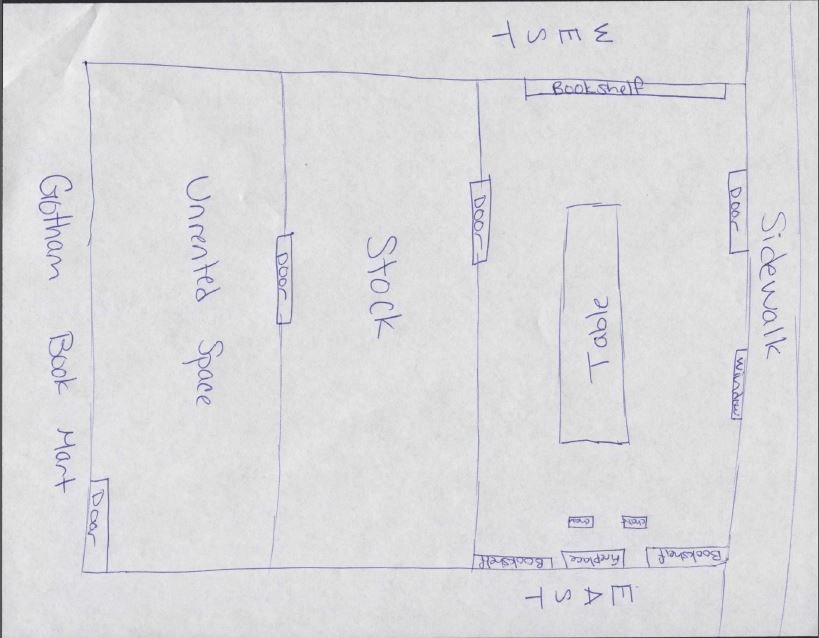 Frances Steloff sold things, not objects, within her store.  Her items had innate value because Steloff had chosen them herself.  A blog stated that, “Frances Steloff opened Gotham Book Mart in 1920 after selling books from her window with a sign that said “Interesting Books Selected by Myself” (“Wise”).  To Steloff’s customers, this statement is all that needs to be known about GBM.  The owner had impeccable taste and chose each and every copy of each book that she bought and sold, making this collection her own.  In his work, Thing Theory, Bill Brown writes, “things do not exist without being full of people” (Brown 12).  This is certainly true within the walls of Gotham Book Mart.  These novels and their innate quality would not exist if it were not for Frances Steloff.

A blogger wrote that, “The Gotham and Miss Steloff championed the experimental and challenged the censors over the years.  She supplied James Joyce’s books to US readers as they were published, including those with legal difficulties from the US’s obscenity laws, a service she also provided for D.H. Lawrence and Henry Miller’s work.  She was one of the founding members of the James Joyce Society,and Joyce himself occasionally ordered books directly from Miss Steloff” (“Wise”).  Many of the pieces that were sold by Steloff were second-hand items.  Morgan says, “Much of her [Steloff’s] buying was of second-hand books; she held them until they were wanted, and then sold. Indeed, if a desirable title was not available, GBM was adamant about getting it out to the public” (Morgan 741).

“New York City Structures: Lyceum Theatre.” The Epoch Times » The Epoch Times Is an Independent Voice in Print and on the Web. We Report News Responsibly and Truthfully so That Readers Can Improve Their Own Lives and Increase Their Understanding and Respect for Their Neighbors next Door and around the Globe. N.p., n.d. Web. 20 Oct. 2013. <http://www.theepochtimes.com/n2/united-states/new-york-city-structures-lyceum-theatre-162615.html>.