When I’d first encountered Books-A-Million at the Susquehanna Valley Mall, I’d have to say the experience lacked any memorable qualities that personally spoke to me. As someone who grew up around independent bookstores, I couldn’t shake the feeling that a corporate bookstore was more of a temporary space. For the everyday consumer, a temporary space may not have an effect on what is sold in a store. But for an avid book lover, the bookstore itself entices, connects, and creates the type of audience that are drawn to the space.

For Books-A-Million, their audience appears to be a combination of consumers, book lovers, temporary fandoms, and deal-seekers. The bookstore uses a well-organized, strategic floor plan to herd their audience into the store. (See the floor plan shown below.) 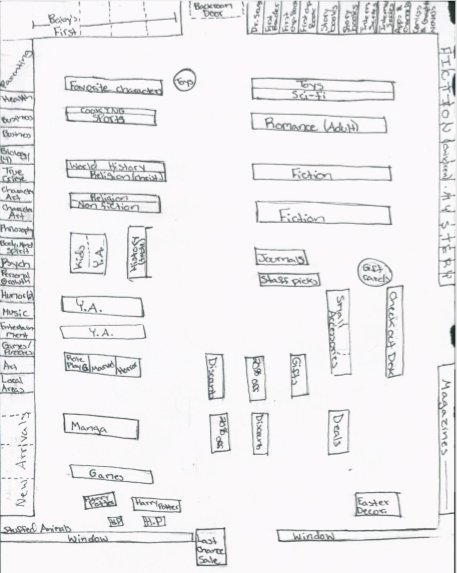 Floor plan of Books-A-Million in the Susquehanna Valley Mall.
Note: Picture not drawn to scale. Green circle is the entrance.

The location of Books-A-Million is strategic in and of itself. The bookstore is located a short distance from Auntie Anne’s and a Cinnabon, two food sources that have food and beverages to- go so people can walk around and browse. Books-A-Million has large windows on either side of their entrance to showcase all of their colorful “special products” inside. While stores in the mall usually have large windows, it nonetheless still adds to the bookstore’s toy-box-like charm.

For those who wander by, they’ll peek through the windows and notice an assortment of items: large stuffed animals nestled close to the glass (“casually” placed in front of the New Arrivals section), a huge Harry Potter section that consists of wizard wands, character Funko POPS! and, of course, the book series (but with their new redone covers). On the right side, slightly adjacent from the magazines, are the Easter decorations that show the bookstore keeps up with the holidays as well as the trends.

As someone who doesn’t care about the trends of today, I felt thrown off at how “in the moment” the sneak preview of the store had been. Other than childhood nostalgia, there doesn’t seem to be a connection to the past like that of an independent bookstore. In Unpacking My Library: A Talk about Book Collecting, Walter Benjamin discussed the idea of ownership as magic because it’s a connection with the past (60-61). There is nothing wrong with being in the moment, but can we really learn or enhance our experiences if we lose that connection with the past?

The two end and middle isles were pretty slim. A smart strategy to get consumers to turn around and look so they avoid hitting anything.

I pondered this question as I stood at the entrance. I’m greeted with the Last Chance book rack, which is positioned to be half-in and out of the store. Like a magnet, my eyes are drawn to the inside of the store by the medium-sized 20% off political, young adult, and horror novels. I couldn’t help but cringe at the little discount stickers that stuck to the covers. There seemed to be no thought into how hard it can be to remove a sticker from a paperback cover without damage to the book.

As I turned to exit, the shine of the Funko POP! cardboard and game containers reflected on my glasses. As I past through the slim isle, I found myself before the New Arrival section. The end of the new arrivals and New York Times Best Sellers aligned with the end of the Manga section. I continued straight through the Young Adult, where the covers began to look the same. A few steps away was the Nonfiction section.

One-third of the first Nonfiction shelf had contained Christian-Living. (There is an image of the shelf on the floor plan.) I thought about the connection between the past and the present. With such a small nonfiction section it seemed like Books-A-Million wasn’t interested in anything to do with the lives of people. However, their World History and Sports section begged to differ. Books-A-Million did kind of care about the past, but only if it pertained to the more well-known occurrences (i.e., the World Wars, Trump presidency, famous football players, etc.). Rather than embrace the past, the bookstore boxed the past in between Young Adult fiction, Adult Romances, Parenting, and young children; all things that pertain to things accustomed to “the now” or to the future.

In my eyes, Books-A-Million does follow the stereotypical chain bookstore idea: follow the trends of today and the future. As I stood before the Parenting and Baby’s First Books section, with the past literally behind me, I couldn’t help the feeling of being temporary, like every Young Adult novel that would soon be rotated out for a newer, similar Young Adult novel.

The slim spaces between the shelves helps herd costumers in a particular direction.

Yet I continued towards the toys and Children’s section, which covered the large L-shaped portion of the bookshelves on the right until the Mystery section began.

Ironically, the Adult Romances were placed near the Children’s section. I thought the placement was both fitting and alarming. Fitting, because in some cases the content of the adult romance may lead to actions that lead to parenting. Alarming, because I wouldn’t want my young children to pick a random book off the shelf that may lead to answering uncomfortable questions in the bookstore.

Finally, we’ve reached the checkout. The position of the cash register is perfect for an eagle eyed view of all the “important” components a corporate mind might care about: the entrance, the last chance sales rack, smaller accessories, such as gift cards and little children’s toys, and the staff picks. Since a chain bookstore wants cashiers, someone should always be present to discuss their choice pick. Just as you go to leave, to the right of the cashier, there is a magazine section for people who enjoy magazines or those who have to wait.

As I left Books-A-Million, I felt like I was leaving just a plain store. The design of the store ushered me to the left until I came full circle. The books seemed like mere objects, products, rather than something people may view as sacred.

In Reluctant Capitalists, Laura Miller discusses the idea of books being “beyond products”, that it is us, the individual, that makes the book a sacred object because of our attachment to it (21). But I’d argue that the atmosphere a bookstore holds can impact how an individual views the book.

Like Books-A-Million, if a book is disregarded as a simple object and put in a store that feels like every other store, then that feeling will present itself to the costumer and influence their perception of the book. The vibrant lights and colors of a bookstore may work to draw people in, but if there isn’t a strong vibe or link between the place and the book, then the book will forever be deemed just a temporary object for a place that will never feel like home. If there is nothing to connect the book or place to the past, could it ever be sacred or a home?