What do you see when you hear the word “bookstore”? Close your eyes, take a breath, and say the word to yourself. Say it again. Does the image change? Is it a memory or an imagined place you explored in a dream or a picture you saw browsing the web? The first thing that hits me about my mental bookstore is the smell. It has a noted presence, but doesn’t smother or choke you when you walk over the threshold. The smell of paper and ink and glue and coffee and blueberry muffins. A clean smell, but a clean that has been lived in and loved without the sterile undertones of chemicals. The space is populated by wooden bookcases, a warm breed of either cherry or a dark walnut, low rows in the body of the space and seven feet tall along the perimeter with ladders to assist reaching the upper shelves. It has an open ceiling with a balcony level on the second floor of more tall bookcases, second hand and collectibles. A modest café sits to the left, a children’s space with a small stage to the right. I can never figure out where the register goes.

A panoramic shot of a typical Borders store

Over the course of my previous two posts we’ve explored the outer dynamics of a bookstore through our case study of the Borders in Ann Arbor, Michigan such as the immediate surrounding area and the history of its development. While these are vital forces that shape a bookstore it is the expression of these forces, the internal space and organization of the store itself, which the casual observer and customer interact with directly. Following the theme of my post on the history of the Borders Group, I will begin by focusing on the Ann Arbor flagship and then expand to a generalization of the chain as a whole. Unlike independent stores which are personal expressions of the direct owners, chain stores focus on the idea of uniformity across their various locations because they want to create a standard image of the “Borders experience” in their customers minds.

The Ann Arbor store began as a product of it’s local community when Tom and Louis Borders opened their used bookstore in 1971. Although little information is available on the specifics of the floor-plan of that location, it is easy to invent a picture of the two-room store above the Lake Art’s Supply. Books lining the walls and perhaps either tables or more bookcases taking up the center area with more wares, space allowing. The early Borders locations have also been described as community centers, and so there were probably chairs located somewhere in the space for customers to sit down and discuss their most recent finds.

An example of the genre signs found in Borders

Although it is hard to recreate an idea of the original location, the final incarnation of Borders Bookstore in Ann Arbor is a different story. I was unable to find an exact blueprint of the location and when searching through photographs it is difficult to distinguish between the flagship and the hundreds of other Borders locations, but there is a description of the exact store included in research done by Mary-Brook Todd of the University of Michigan titled A Place for Everything: Examining the Organization of Children’s Materials in Bookstores & Libraries. It is described as having a clear organizational scheme based off of subject and then broken down alphabetically by author or series, notated by signs above the sections to call attention from far away and within the isles to guide customers more directly. The collection included Fiction in genres such as Science Fiction/Fantasy, Historical Fiction, and Mystery Thrillers as well as Non-Fiction such as Art, Music, Cooking, and General Science. Though both were represented Todd notes that the non-fiction options were more limited, implying that there was a greater focus on entertainment reading than instructional or technical. Popular series were given specialty displays, while books covering controversial issues were grouped into “Family Issues” or placed in an entirely different room labeled as “Teaching Reference”. The other major distinctions made for collections were the children’s literature and the multimedia, which were grouped together and separated from the rest of the store (Todd). While the factual description of the store is useful, it is Todd’s commentary under “Key Findings” which truly pique my interest.

While she does state that the large signs throughout the store are helpful in directing customers quickly, in her Key Findings list only three lines down she also expresses that there were too many displays located throughout the store, which disrupted her exploration (Todd). This comment stuck me as odd considering the fact that  chain stores like Borders are often thought of as having a strong emphasis on the accessibility of their layout, aiming for a more hands-off role for the staff members. My assumption is that this comment speaks to the commercialism of book selling and the growing influence major publishers can have over the set-up of a bookstore through the ability to rent display spaces. When there are multiple organizations designing displays for a single space it makes it difficult to coordinate the overall store design, which could cause the results to be overwhelming or simply aesthetically displeasing to customers. With so many options of reading materials available, publishers sometimes find themselves shouting their advertisements in order to be heard over the rest.

The second item on the Key Findings list that caught my attention was the seemingly throw-away comment “Organization not based on community needs or demographics” (Todd). Out of everything in this short section of her study, I wish she had spent time to expand this observation, because it is my assessment that this is the major divide between chain stores and independents and, if able to be traced through the history of the store, could be used to pinpoint the moment Borders no longer belonged to the Ann Arbor community. Limited by the master plan for all of the chain stores, the Ann Arbor Borders was forced to become less connected with the community that had created it and more standardized with what the Borders Group wanted the chain to become as a whole.

Laura J. Miller dedicates an entire chapter to the type of standardization seen by Borders bookstores world wide in her book Reluctant Capitalists. Chapter four begins with the sentence “The history of retailing in the United States has shown that standardization is fundamental to a mass merchandising strategy” and then the following thirty pages of chapter four continue to outline the history and reasoning behind this process (Miller, 87). In 1922 standardizing techniques were being applied to grocery, drug, and department stores, but bookstores were still held in a sacred space similar to the early Borders locations or any number of used and independent booksellers you can find today, although over the years even those locations have started to subconsciously conform to the expected “idea” of a bookstore.

While the standardization is often criticized as being bland or impersonal, as seen in Borders it also offered an opportunity to streamline the book shopping experience, which has been a demand from consumers as our society continues to move faster and faster (Miller, 88). As Miller explains, the stores no longer cared to be seen as “high-brow”, instead moving towards a modern and casual look that would attract the wide array of customers available to them once they transitioned into suburban malls. In particular, they focused on bright colors, contemporary materials, bold signs, and better lighting (Miller, 92).  All of these traits became iconic in Borders stores around the globe, such as the bright yellow and red paint that was present in almost every store, the pine paneled shelving, the black leather chairs, the stark white on black signs, and the fluorescent lighting hanging from the ceiling. These were the basic ingredients of a Borders store and were what worked together to create uniformity no matter the size or shape of the building. This concept is shown below in my mock-floor plan of a typical Borders bookstore. I created it by studying photos of various stores and pulling out some of the persistent themes such as the furniture and color pallets. This technique was chosen over mapping out a particular store in order to highlight how similar all of the locations truly are. 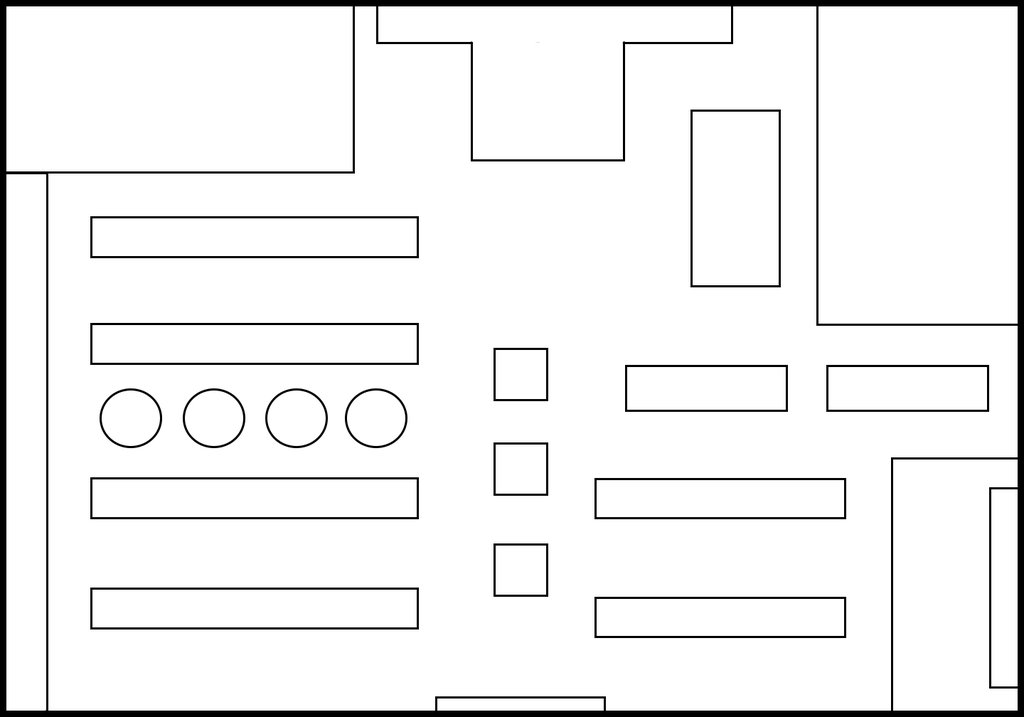 So, I ask again: What do you see when you hear the word “bookstore”? We’ve reached the same point as the conclusion of my previous post, to Christopher Morley and his enigmatic “Professor”. In Parnassus on WheelsParnassus is a wagon that contains so much more than one might assume, it is a bookstore and it is a home. Regardless of where it is, on a country path or a busy street, the moment you enter it you are taken far away. Through the stark separation between what is inside the space and what surrounds it, Parnassus becomes a sort of liminal  space. With all the isolating qualities of the standardized chain stores, the fact that you can enter a store in Pennsylvania only to travel across the country and enter another of the same name in Washington and feel as if you’ve returned to the original evokes that same sense of liminality. The stores within a chain, with all of their carefully chosen swatches and shelving, form a network and a community that cannot be contained by a single town. While one might mourn the loss of a personal connection between a town and its book provider, it’s hard to deny the appeal of always feeling like you can escape to your favorite bookstore, no matter where you are.

Todd, Mary-Brook. A Place for Everything: Examining the Organization of Children’s Materials in Bookstores & Libraries. The School of Information. University of Michigan, n.d. Web.