City Lights bookstore has always been in the same spot on Columbus Avenue, selling books with strong counter-cultural views and attracting those who want to share in that culture. Despite starting out as an all paperback bookstore, City Lights has made a name for itself, and has survived all these years while many independent bookstores across the country have been failing and chain bookstores have been rising up. Despite everything City Lights has been through, from the Howl controversy, to financial troubles in the 80s, the bookstore still stands tall with three floors full of books. 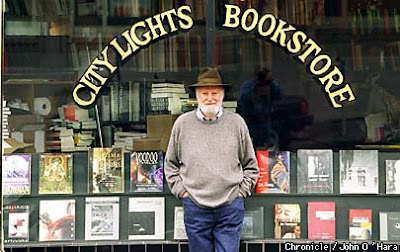 Peter D. Martin was the one who started City Lights. Before it was a bookstore, it was the name of Martin’s magazine, which he then used when he started up the bookstore in 1953. With the help of poet Lawrence Ferlinghetti, the two of them opened the first all paperback bookstore in the country, a strange move in the bookselling world at the time. After running the store for two years, which started out as only occupying a small section of the Columbus Ave building, Martin sold his share of the bookstore to Ferlinghetti, who became the sole owner of City Lights in 1955. Martin moved to New York to start another bookstore, the New Yorker Bookstore, leaving Ferlinghetti in San Francisco with City Lights Bookstore.

It was around this time that Ferlinghetti came up with the genius idea that would lead to much of the store’s success throughout the years to come. In 1955 he founded the City Lights Publishers and published the Pocket Poets Series through this publication. While the publication may have partially been to help Ferlinghetti himself, as he published his own work through City Lights, it was also to get the work of unknown, counter-cultural poets into print. The publication then published the works of Rexroth and Patchen, two influential names in both the San Francisco Renaissance, and the Beats Generation. City Lights was lucky to have its own publisher. Through this, it became a unique entity, a bookstore that published many of its own books, and had another way of earning an income rather than just selling books. City Lights Publishers, Ferlinghetti states, is one of the main reasons the bookstore was able to thrive as long as it has. It was something other bookstores didn’t have.

Controversy arose however when City Lights published Howl and other Short Poems by Allen Ginsberg in 1956. It was the fourth book in the Pocket Poets Series, and contained very controversial topics regarding drug use and sexuality. Ferlinghetti was not afraid to publish the book, as it went along with City Light’s drive for important counter-cultural works. Publishing this book led to Ferlinghetti’s arrest and trial because of its obscenity. He was acquitted of the charges because it was decided that Howl did have social importance and wasn’t merely obscenity for the sake of obscenity. In the end, the controversy over Howl was good for City Lights Bookstore and Publishers. It brought national attention to Ginsberg and the publishers who printed his work. Ferlinghetti’s trial also changed the standards for freedom of speech in the literary world, another noteworthy contribution.

In 1999, City Lights bookstore took a huge step, and finally bought their building. Until that point, the bookstore location was merely being rented out. Now, having expanded far beyond that small little corner they used to have, City Lights was ready to take over the whole building. Slowly throughout the years as businesses left, City Lights expanded into their spaces, but now the building was all theirs and all dedicated to the selling of books and spreading of counter-cultural ideas.

In 2001, City Lights Bookstore was named a historic landmark of San Francisco, California. Since it began, City Lights had made a name for itself in the San Francisco Renaissance with how it attracted those from the Beats Generation and others willing to go against the norms of society. It had survived, as an independent bookstore that started out selling only paperbacks for almost fifty years.

Now, years after the Beats Generation, City Lights still stands as a symbol and meeting place for counter culture in literature, politics, and anything else. Partially due to Ferlinghetti’s success as both a poet and bookseller, and partially due to the success of the City Lights Publisher, the bookstore has survived longer than most independent bookstores in the nation, and is still going strong. The building occupies all three floors, one of which is dedicated all to poetry. The bookstore, however, does not merely survive on the Beats literature that brought it success in the past. Ferlinghetti is always trying to bring in more recent authors to line the shelves that exemplify what City Lights stands for. He says that these days, the most interesting authors are the ones who “haven’t had their revolution yet” like minorities and women. The bookstore is trying to look to the future, rather than simply rely on what is now in the past. They continue to try to bring about culturally relevant ideas, ones that go against the grain of society and make people think.

Much of City Light’s past and continued success comes from the fact that it is both a Bookstore and a Publisher. This has influenced those who come to call City Lights an importance “place.” By being a Publisher, for one, City Lights helped to avoid some troubles that many other independent bookstores faced. As Miller describes in her book Reluctant Capitalists, booksellers and publishers faced miscommunication often, and ended up suffering because of it (Miller 33-34). City Lights published many of their own books, and didn’t have to worry about miscommunication or unjust publishers. The Publisher and the Bookstore were one and the same, working together to create a community. Also, by publishing these books, City Lights attracted the authors and those interested in their ideas, making it more than just a bookstore. Without the publishing half of City Lights, who knows if it would have survived at all in a world where the chain bookstores were taking over.  As Morely writes, “Literature and the great personalities who commit literature start sometimes very strange vibrations” (Morely 47). This too is true for City Lights, who became a point on the map for those who wanted to be involved with counterculture, especially after the Howl incident. The people of City Lights started these “strange vibrations,” and those who wanted to be a part of the movement traced those vibrations back to the source. City Lights still stands as a hub for those who just want the “good old days” of the Beats generation, but also more current issues. It is three whole floors full of books and unique culture for all those who want to be there.