On a rainy day in March, I walked into Mondragon Bookstore to see the owner, Sarajane Snyder, and a shop volunteer using the front room to look through books while listening to a country-sounding record. Some stores would allot off-time for reorganizing, but Mondragon is transparent with its customers. There is not a veil between the owner and the consumer, speaking to the general notion that Mondragon’s shelves are never finalized and are always evolving to educate the multitude of visitors that enter the shop.

Even though Snyder created a hand-drawn map for Mondragon’s interior, the owner was quick to note that she is always thinking about changing the shelves (Snyder). Currently, the map is cluttered with general categories that are surrounded by smaller hand-written footnotes regarding quirky store details. Her clear distaste for the pristine is evident in the visual qualities of the map, which is reflected in the rest of the store. While there is a general organization, the “stuff” of the bookstore is artfully displayed in a jumbled yet pleasing way. Corporate bookstores may rely on organization and cleanliness, but Mondragon is a unique space that has the personality of an independent shop. 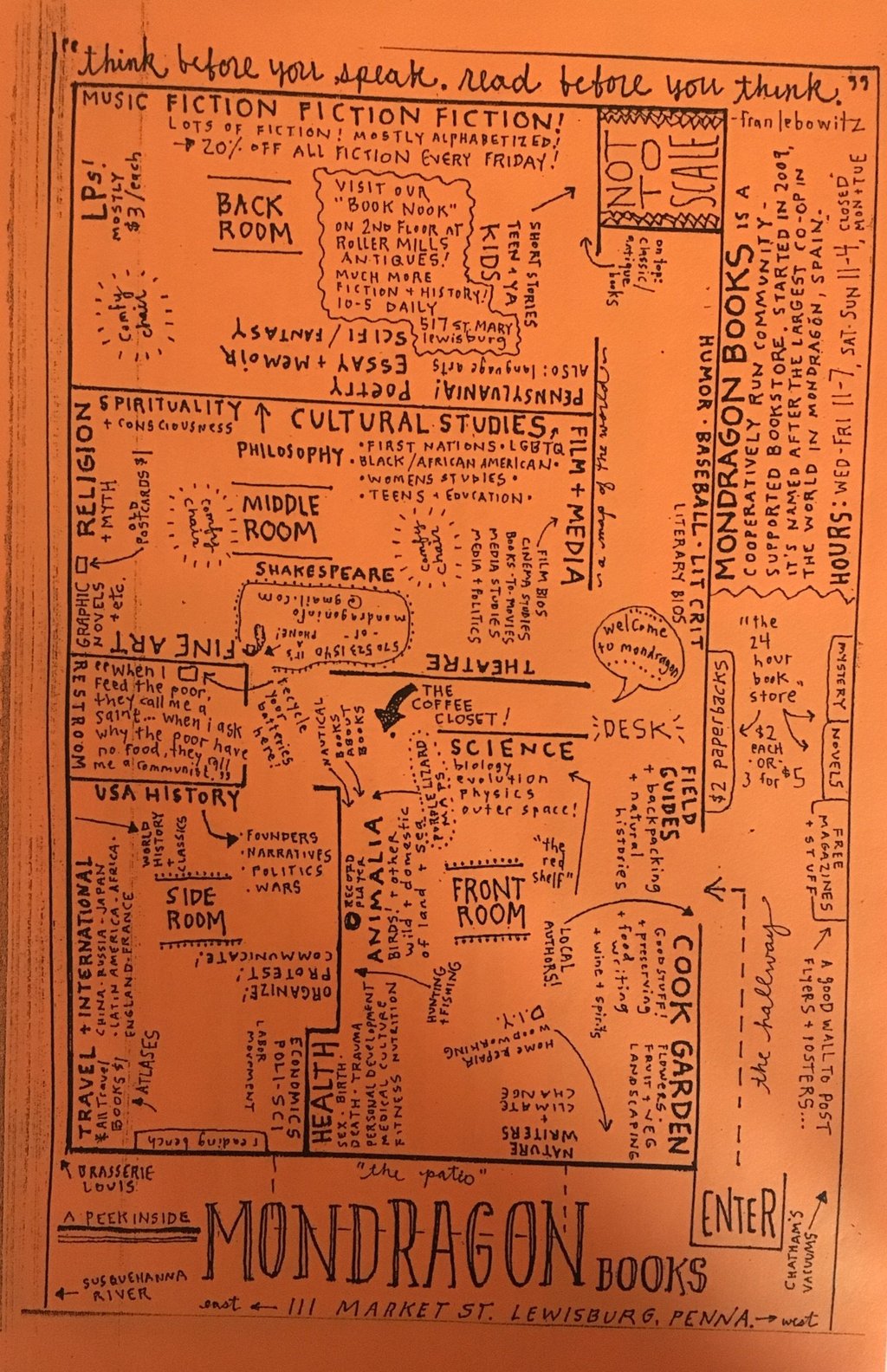 Although independent bookstores have a certain rebellious nature to them, this is a relatively new concept, as outlined in the book Reluctant Capitalists: Bookselling and the Culture of Consumption by Laura J. Miller. In the latter half of the twentieth century, it was much easier for chain stores to succeed in the marketplace, so independent stores had to come together to fight for the lack of justice (Miller 175). Mondragon echoes this notion still because it is clear that the store takes pride in its uniqueness. There are piles of books on floors and tables that are not shelved in a seemingly organized manner. This demonstrates Snyder’s lack of needing to follow corporate bookstore rules and allow Mondragon’s interior to reflect the aesthetic that independent stores are supposed to embrace.

A pile of books on a table that are not neatly shelved.

In the front hallway of the shop, I was first greeted with local magazines and pamphlets advertising the greater Central Pennsylvania area. Those wanting to find more information about local happenings do not have to actually enter the main part of the store to receive information, demonstrating that local organizations have a symbiotic relationship with the greater community and rely on each other to survive.

Hall Books are accessible 24/7 and are sold at a cheap price.

Past the local section of the hallway rests a couple of shelves filled with cheap books. These books are strategically placed outside of the main part of the store because Snyder is aware that these books are unlikely to appeal to most people. Additionally, the owner knows that people will come in during off-hours (the hallway remains unlocked) and steal books, but she is not overly concerned about it. Snyder is fully aware that the store will not be making a huge profit off of them.

Snyder’s willingness to let books go is unlike traditional means of collecting. To an extent, the bookstore is similar to a museum space because both are in the business of preserving culture. Arthur James Clifford discusses the ways in which society impacts culture in the book The Predicament of Culture: Twentieth-Century Ethnography, Literature, and Art. Most collectors try to tie in each item of a collection to a specific narrative that is not always accurate (Clifford 244-246). Instead of trying to fit each book into some important narrative, Snyder understands that she does not have use for all items of the past. The collection of books in Mondragon is living and not bound by social or cultural constructs. This is what allows her to let go of certain items and not hold onto something for its supposed intrinsic value.

A painting by Joanne LaNois in the front room of Mondragon.

Following the front hallway, the front room of Mondragon is the temporary home to a hodge-podge of items. In a room filled with books, I instantly noticed the paintings on the wall first. Both panels are by artist Joanne LaNois and include visually abstract representations of the figure that exist in some unknown space. These paintings symbolize the bookstore because shop visitors enter into an unknown, cluttered space full of colors and differently sized shapes. The paintings portray the idea that the visual qualities of the interior are just as important as the actual books. Mondragon has a certain aesthetic, and the items in the shop give it character.

The books in the front room are reflective of Snyder’s core beliefs. While I would consider most of these books to be coffee table books, they are about bettering oneself and learning to be self-sufficient. Snyder used to work on a farm and is highly interested in being able to provide for herself (Snyder). This front room serves as Snyder’s “friend trap,” seeing that Snyder’s ideal friend would probably not want to leave this room without reading more.

Following the front room, there is a side room that consists of books about travel, history, and economics. On their face value, most of these books seem boring, even Snyder mentioned that she wants to change this part of the store (Snyder). Regardless, she did manage to enliven the space by placing small collages on the selves. These collages are made up of old books that Snyder allows visitors to destroy during art nights on Thursdays (Snyder). Again, this demonstrates that Snyder uses books for aesthetic reasons and is not overly concerned with just preserving them.

In the middle of the side room, there is a desk by the window that faces the street and invites visitors to sit down and read a book. The books may not be interesting to the average consumer, but they serve as a decent backdrop for those wanting to sit at a desk and feel as if they are in a cozy, contemplative space. This is another example as to how the bookstore is not just about preserving the merchandise but being a visually appealing place for consumers.

A desk with a view.

To get to the next room, visitors are guided by the connecting hallway to the middle room. This room looks like the course catalog for a liberal arts college because there are sections for fine arts, philosophy, religion, and theater. It is a room dedicated to teaching, as are most of the books in Mondragon’s collection.

Another hallway full of books leads to the back room. Here, one is able to find all the books filed under fiction, one of the most popular book categories. Instead of being able to easily locate the ever so popular fiction books, visitors have to navigate through the entire store and see everything that the shop has to offer. It is a smart marketing ploy, but it also allows consumers to learn more about other types of books while walking through Snyder’s visual aesthetic.

The fiction section located in the back of the shop.

Overall, Mondragon’s interior is organized in a unique way that does not follow the clean structure of a corporate bookstore. While there are general categories, Snyder wants the space to give visitors a unique store experience that is welcoming and focused on bettering oneself. Corporate bookstores make the book-buying process easy, while Mondragon encourages visitors to think about the space and learn from their surroundings.