For Sale: Books (and Small Children, Too!)

As a senior undergrad student I have a hard time imagining that the temptation of discount books and a cozy promise of caffeine could fail to appeal to anyone. Interestingly enough, the owners of the Politics and Prose bookstore seem to believe the same thing. When you enter the bookstore, the stairs to the lower floor are located directly in front of you. Above are large signs advertising the sale books and the Modern Times Coffeehouse awaiting patrons just downstairs.

Below are two floor plans of the Politics and Prose bookstore. If you hover over the image, small tags will appear. For the main level, I would recommend following my train of thought by beginning in the Fiction Room and then going around the store in a counterclockwise manner. For the lower level, my experience was more scattered, thanks to the complexity of Google Maps. I would recommend taking a more orderly, clockwise path starting with the discussion tables. 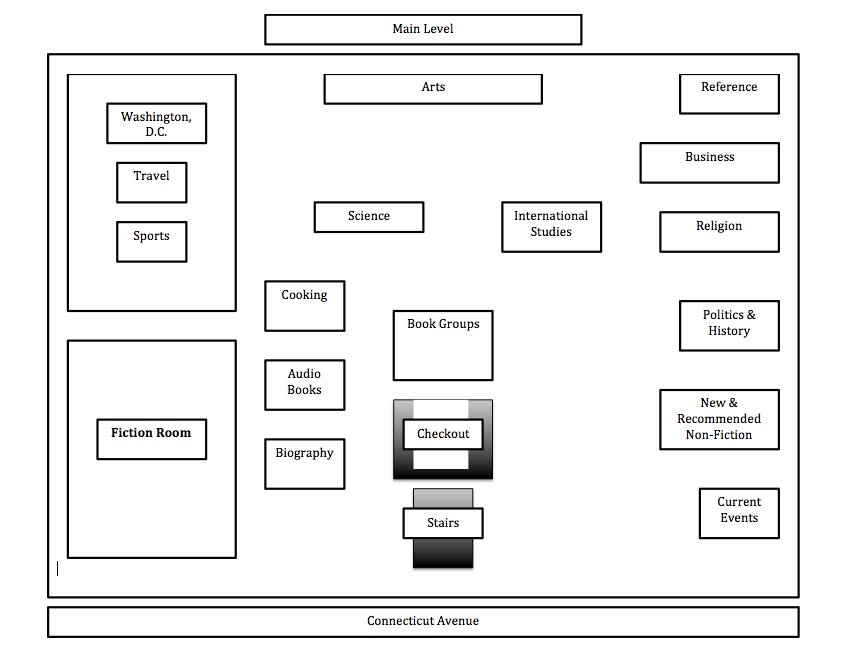 If you are interested in a fictional series, the Fiction Room on your left after entering the bookstore is your main objective. Inside you are not only surrounded on all sides by the store’s fiction selection, but you can also find the Opus machine. There are less than 100 of these machines in the world. Clear walls allow you to see how the machine is printing on the inside, so when Opus is in action it will often draw a crowd of onlookers to the Fiction Room. A so-called Espresso Book Machine, Opus is able to print paperbacks on demand in five minutes or less. With that unofficial slogan that sounds an awful lot like a cheap pizza business, Opus is keeping the printed book relevant in the age of e-books and tablets.

If instead of going left into the Fiction Room you stay on the main floor and go to the right, you will encounter the part of the store that I honestly have the least interest in. This part of my digital tour was what really made me fit the name of the bookstore to its merchandise. Although the rest of the bookstore is not entirely political, it is certainly interspersed with politically associated genres more than your average bookstore.

Susan Tobias, a patron of Politics & Prose, relaxing in the aesthetically pleasing Art section. And yes, tucked away on the Art bookshelf behind her is a book with President Obama’s face on the cover.

At the entrance you will encounter today’s current events in the form of The New York Times, and continue on to the Politics and History section. Passing between the International Studies and Science sections, you find another entire corner of the bookstore designated to Washington, D.C,Finally, at the very back of the store, framed by sunlit windows and an open, aesthetically pleasing space, is the Arts section. If ever there were an instance in my mind of prioritizing the “top shelf,” this would be it; the Arts section located in the most pleasing place on the main floor, and the cheaper books and walking petri dishes section located down below in the lower level.

If you are neither interested in the Fiction Room nor the rest of the politics-infused portion of the main floor, then I would assume you are either a patron looking for affordable books or a mother of young children clambering to get their hands on a new elementary fiction story. Either way, heading straight downstairs to a rejuvenating latte is the way you want to go. Even if the occasional open ceiling concept gives off a more industrial style vibe, all of the shelves and books appear to be kept organized. The designated areas for children are colorful and inviting, whereas the discussion table area is simpler, with an open and clean space meant for work that is separate than what would be done in the coffeehouse. In the coffeehouse, there seems to be a unique energy compared to the rest of the store, where I imagine contemporary jazz would be playing underneath light chatter and the occasional coffee grinder. 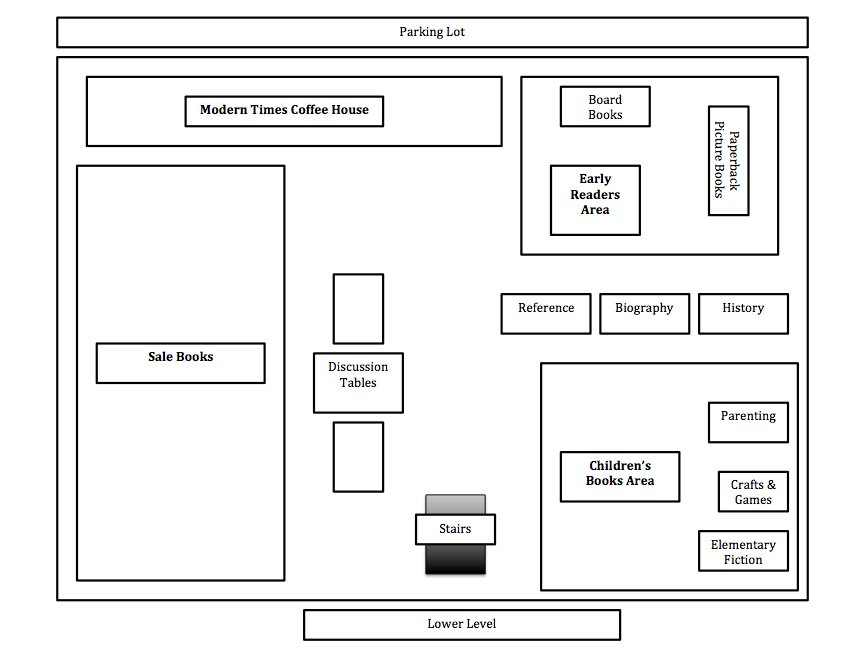 After taking this entire tour digitally and with the help of the constantly busy staff members of Politics and Prose, I had to wonder at the placement of all of these genres. As Brown wrote, “The story of objects asserting themselves as things, then, is the story of a changed relation to the human subject and thus the story of ho the thing really names less an object than a particular subject-object relation” (Brown, 4). In less convoluted terms, I believe there is something to be said for housing the sale books with the parenting and children’s books. Sale books tend to have that vibe that less people want them, or else they have seen better days on the market. Putting these books in the vicinity of children could simply have been strategic damage control. After all, if a child gets his or her hands on a sale book, far fewer people are going to worry about the condition of that book in the timeframe of the child picking it up and a parent quickly plucking it out of their hands. Likewise, having a coffee house in a bookshop always poses the potential for spilled drinks or scone crumbs getting near preciously valued books. If a sale book were to get blueberry muffin droppings on it, it would have less value than if it were on a pristine, gold-gilded book set of Shakespeare works.

I do wonder, however, if there is not more to this layout than initially meets the eye. Although both the original owners and the current owners have children (and some grandchildren), all of them are older and grown. Perhaps both sets of owners have a lesser tolerance for young children than they are willing to openly admit, and so decide to put that section of their bookstore downstairs. As Benjamin put it, “inheritance is the soundest way of acquiring a collection” (66). Perhaps when Graham and Muscatine took over Politics and Prose they also took on the original owners’ viewpoints and values for certain genres and clientele. After all, neither set of owners could avoid a children’s section altogether, given the family-filled demographic of the Chevy Chase neighborhood. An idea that I found quite interesting to come out of all of this is that, although they are delegated to the lower level of the store, the children still get their own history section. Clearly political topics are an encouraged reading subject by the owners of Politics and Prose, regardless of the age of their patrons.