From Wig Racks to Fat Cats Gotham Book Mart was always a place that existed for more than the day to day commercial business of book-selling, and this was reflected in its quirky decor and conversation pieces. The crowd that gathered on May 22, 2007 at 16 East 46th Street for the store’s last hurrah, the auctioning off of its inventory, were looking to bid on more than just books. While the Book Mart was in operation, the store was a clutter of different book-related artifacts, a veritable shrine of literary culture and history.

Some of these items included Andy Warhol’s wig rack, photographs of famous authors in the store or elsewhere, words of wisdom written on placards, postcards, paintings, statues, and various other odds and ends. The bookshelves were floor to ceiling, but a lot of the focus was on the culture surrounding literature rather than the literature itself. Francis Steloff in the Book Mart

The photo at the right of the founder, Frances Steloff, in Gotham Book Mart shows both the haphazard clutter of books and photographs and paintings, all in mismatched frames and often crooked and hung wherever they fit. The bookshelves were the same, varying in design, width, height and breadth. Some books sat out in the open in piles, some were behind glass, some on stands or stacked on the floor where shelves overflowed.

The store specialized in small press books of poetry and literature, Steloff making a point of buying the work of undervalued authors such as Edward Gorey or Henry Miller and promoting their literary endeavors. There were also books focused on theater, film, music, architecture, and art, as well as items signed by famous storegoers such as Tennessee Williams, Robinson Jeffers, Woody Allen, and John Updike. Walking into the store, a pursuer of the store’s shelves would be more likely to find a copy of an experimental literary magazine than whatever was on the bestseller’s list. The store focused on the modern and little-known, which must have really given the customer the sense that they were in a place where literature happened, not just where it was sold. Gotham Book Mart gave a face and character to the books it sold, so that the customer felt that they were involved in something greater than themselves.

In this way, the books in Gotham became more than just reading material. Serving as a haven for book-lovers, the Book Mart transformed the bound paper and leather “things” into treasured “objects”, such as the kind that Walter Benjamin discusses in “Unpacking my Library”. When talking about the collector and his books, Benjamin mentions “a relationship to objects which does not emphasize their functional, utilitarian value– that is, their usefulness– but studies and loves them as the scene, the stage, of their fate” (60). The shoppers of the Book Mart were primarily collectors as most book lovers are and that love of the books that surrounded them transcended materialistic desire to own as much as possible. This was aided by the owners, both Frances Stelloff and Andreas Brown, who were confesssed serial booklovers.

This love of books translated into an atmosphere of homeyness and culture. Various cats roamed the bookstore throughout its lifetime, often with literary names such as one named after Christopher Morley. The thrill of finding a book among the clutter to give the book its “rebirth” as Benjamin calls it allowed the customers to feel as though each trip to the Book Mart was a journey of discovery more than just acquisition of property. It was extremely difficult to find even a general idea of the organization of Gotham Book Mart’s huge amount of stock. The image above of 41 West 46th Street, the address where the store was located longest, is the best depiction I could find of the store’s floor plan. At the front were displays of books written by authors the Book Mart promoted, typically not “popular” or best-selling works but those which the store thought were more important to be seen by the public. The pictures of famous authors and poets can be seen prominently displayed, seeming to look over customers as they shop. The store was quite narrow, most likely with more expensive hardcover titles on shelves and paperbacks stacked on tables in the center. The register appears to be located in the front center of the store, close to being swamped by the encroaching books. 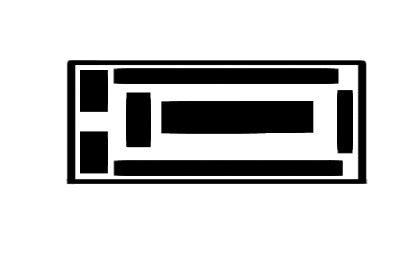 Andreas Brown in the Book Mart

At right is another photograph of the store at the same address which shows Andreas Brown in 2002, a year before the move to Gotham’s final location. Behind Brown’s head, a single sign states “GEMSTONE AND JEWELRY”, presumably demarcating a subject category. A sign can also be seen indicating the front register. It can be assumed that there were many category signs such as this scattered around the store that related to the store’s various interests in the arts, culture, and contemporary poetry, as well as various other more traditional sections.

Through careful research, it becomes obvious that Gotham Book Mart was more than just a store where material goods could be purchased. The arrangement of the bookstore may seem chaotic, but that became part of the allure and a careful ruse to disguise the meticulous care put into the organization of Gotham’s stock. The space occupied by the tiny bookstore was transformed from a dull storefront to a shrine to literary culture. The store was essential to our understanding of what books mean as more than scraps of paper and will continue to be sorely missed.