Get Lost in Mondragon

The way into Mondragon is sketchy. There’s no way around that, and even the owner, Sarajane, admitted as much with a laugh. Nothing about the low-rent building’s rundown front and less than welcoming front door speaks of the true warmth and hominess Mondragon Books offers within.

But once inside the building, Mondragon’s glass door shows the evidence of welcome laying within: an old loveseat in the front room—perhaps purchased by the antique store Mondragon has a stall of books at—for people to read, relax, share some conversation with Sarajane or the others who work the register. A record player, sometimes spinning with the strains of a scratchy old record of classical music. Mismatched dishes of chocolates and other treats that patrons can welcome themselves to as they peruse. And, if you catch it at the right moment, Tiger the cat looking fat and happy within petting distance.

When you walk into Mondragon, you feel instantly that you’re important in that space—and this, in large part, is what compels you to wander deeper through its almost labyrinthine layout, marveling at how every available inch is filled with books. Occasionally, you’ll even come across a pile of books neatly left on the floor: spillover from the shelves, drawing eyes just as far downward as upward.

Books squeeze in where they can, sometimes on the floor

Every conceivable space is occupied by books, and not always with great tidiness. Of course, while this may at first sound like a negative, the truth is that Mondragon’s slightly rumpled aesthetic serve to make it all the more endearing and understandable at a human—rather than corporate—level. As Walter Benjamin wrote, “what else is this collection but a disorder to which habit has accommodated itself to such an extent that it can appear as order” (Benjamin)?

The tight quarters, zigzagging turns, loosely neatened books, and assorted pieces of local art all combine into a genuine personality. I can just about imagine what Mondragon Books would look like as a person: scholarly and refined—or at least, he probably was, back in the day, when he first bought his tweed jacket, but now he can’t seem to find that paper he needs in his decades-old carrier bag. He keeps spinning around after his bag and seems half-lost wherever he goes, but he never really seems to care much, either. And once he’s decided the paper shan’t probably be found anytime today, he’ll sat, Ah, whatever, it doesn’t matter, and he’ll ask you to sit down to have some coffee. If you accept, you’re in for hours of surprisingly pleasant conversation, considering it consists mostly of jaded skepticism toward capitalism and Amazon.

If this personification of Mondragon seems oddly specific, then possibly you haven’t lingered long enough in the layout and aesthetic its stacks. Wandering through them, I felt small next to the towering collection of mismatched shelves, and a sense of childlike exploration fell over me. I wanted to stick by my friends as much as I wanted to ditch them for a more private adventure; even alone in Mondragon’s backmost room, where I finally came across my beloved fiction selection, the silence felt filled by well-worn pages and the ghosts of the records’ many spins.

The placement of the genres, topics, categories, etc. is very deliberate, even if the books within those areas tend to lounge rather than stand at perfect attention. Fiction is located in the innermost room of the shop, which speaks to the general mantra of business arrangement, anyway: draw people in. But in this case, it’s also due to the fact that Sarajane doesn’t believe popular fiction is the heart of what Mondragon offers, however much its sales may support the shop. Those books can be bought anywhere, while many of her other books—the odd, the old, the rare, the less-in-demand—are as unique to Mondragon as its walls and floors. If it’s true that “there is no living library that does not harbor a number of booklike creations from fringe areas” (Benjamin), then obviously the same applies to bookstores like Mondragon, which take the unpopular works as well as the popular and pepper in art made from quotations ripped out of books.

One of the most notable arrangements is the fact that books on politics and economy—and this includes, of course, books on communism—are placed in the first room of the store, directly in front of the entrance. While the first books you see are about gardening, life, and cooking, the first books given the curtesy of their own enclosed environment are ones about the philosophical inception of this commune-inspired bookstore.

And then there are the ways in which the store’s special structure is based on serving the community.

A happy troll adds a personal touch to the shelves

Upon entering, I found myself brushing shoulders with local authors, each with a laminated placard describing who they are and where they live in the Lewisburg-Selinsgrove area. I walked past the couch arranged for conversation, a mini-fridge for (among other things) the pickup of fresh mushrooms, a coffee and tea station, assorted comfy chairs or working areas in every room, a random troll to smile cheerfully down at customers, and hand-written signs pointing patrons deeper into the wonderful maze of literature.

Mondragon is a bookstore that lives by and for its community.

Everything about the place screams, “Come on in! Welcome! Stay a while! Please!” which is a warmly refreshing change from most modern chain stores. The impression such large outlets give is more one of indifference: “Come in, don’t come in. Whatever. We’re too big to count customers by ones.”

Mondragon counts its customers by ones.

I got that sense just by stepping into its space, but it was proved by the simple affection and dedication that shines through the meticulously hand-drawn map Sarajane handed me. She told me she made it one day while the shop was quiet, while she was bored. But the detail work and cluttered organization—echoing the shop itself—speaks of more than just boredom. It speaks of her connection to this space and its importance to her. 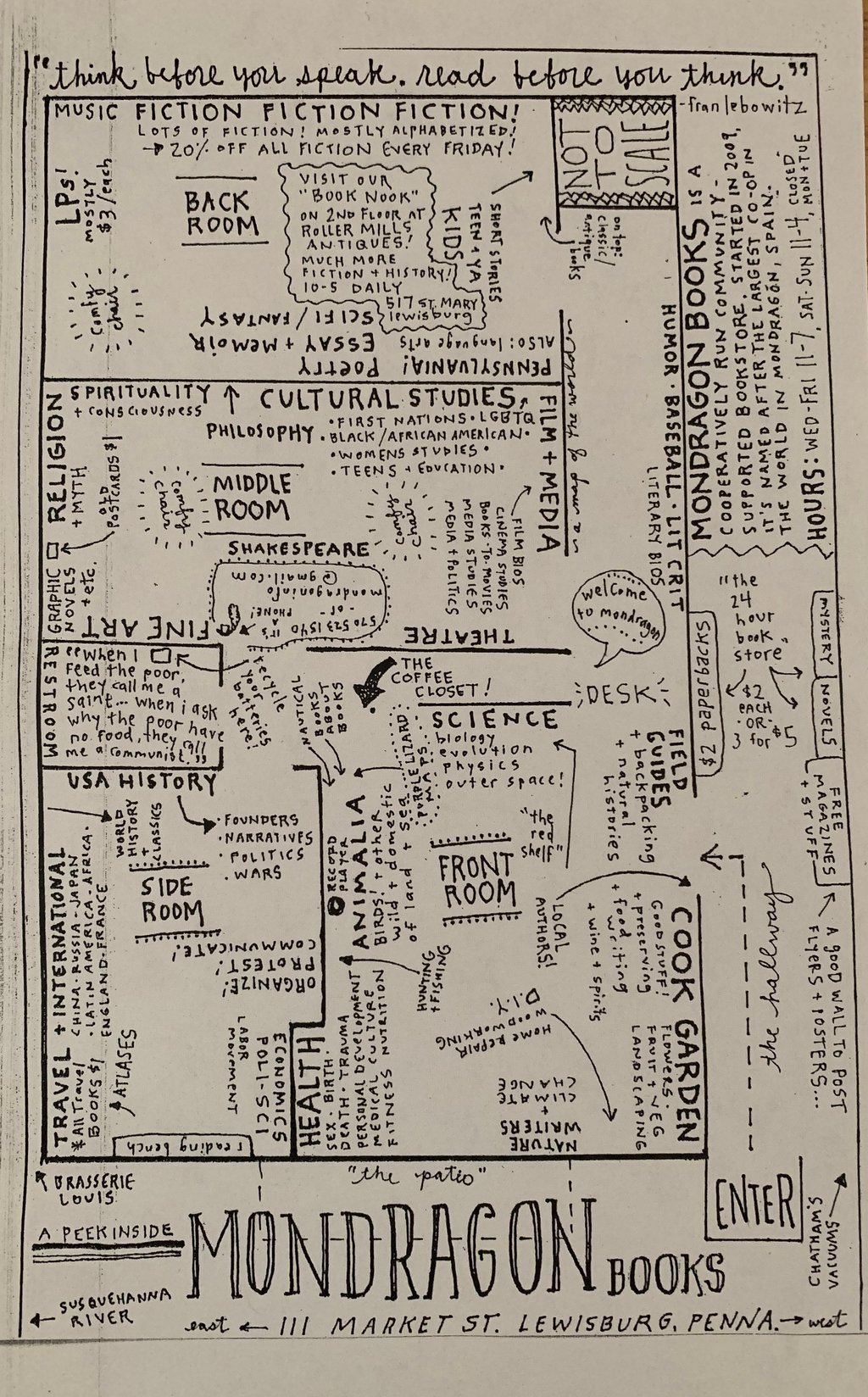 She couldn’t leave the restroom as simply that: an empty little square of nothing much, only a toilet for anyone hearing the call of nature. No, instead, she crammed in a quotation that ties into the founding inspiration of the shop.

A speech bubble by the front desk welcomes you to Mondragon. Exclamation marks make battery recycling and Pennsylvania seem so much more exciting than they might actually be. Little advertisements inform the map-reader about their 20% off fiction Fridays, and the words, “LOTS OF FICTION! MOSTLY ALPHABETIZED!” surely has to put a smile on anyone’s face.

This map represents more than just the physical layout of the bookstore. It represents Sarajane’s thoughtful effort to arrange it that way, her passion for community and connection, and her welcoming attitude to all who seek new reads, a place to sit, old records, a place to pick up fresh mushrooms and recycle old batteries. To all, essentially, who live in the community. Everyone is welcome at Mondragon, and everyone, when they enter, is sure to find something that speaks to their heart and makes them feel immediately at home.

This is a space for—as Sarajane’s hand-scanned fliers advertise—arts and crafts, sci-fi book clubs, dog parties, typewriter nights, and more. It’s a place for the community to come and go as they please, always welcome and never obligated. It’s a place they can get lost in without ever hoping to find their way out. It’s a space defined by the people whose hands arrange it, and by the people whose hands brush the spines of the books on their way through the cozy rooms and halls.

Map is curtesy of Sarajane Snyder, who drew it by hand.

Photos both in text and in the map taken by Hayli McClain.