Giving Meaning to Organization and Comfort

For any avid consumer of books, acquiring and collecting books becomes more than a hobby, but a way of life. Saving a used or forgotten book gives that book new meaning and life when added to a person’s collection. Bookstores can be seen in this same light, as a collection of books organized and put together by the owner of the shop. What may seem like disorganized chaos to one person, can actually be that collector’s way of creating meaning within his collection. Whether intentional or unintentional, the organization of the inside of a bookshop can be extremely telling about the motivations of the storeowner, as well as what they are trying to tell the consumer.

Although I would love to jet off to San Francisco to have the experience of walking through City Lights Bookstore myself, for now I’ve had to let pictures of other’s people’s excursions inform my understanding. City Lights’ webpage doesn’t offer a formal floor plan for the store, so by piecing together pictures taken by others, I was able to create an approximation of what the poetry room of City Lights looks like. 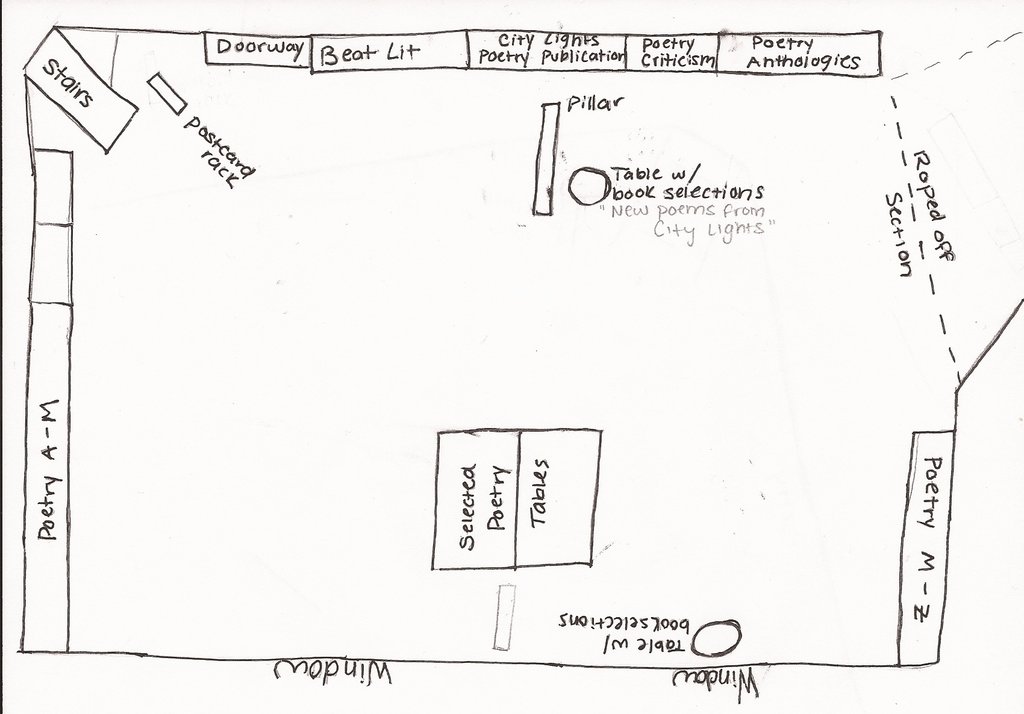 The first significant item of note is the very obvious fact that the poetry room is located not on the main floor, but on the floor above the entrance to the store. The lowest level contains mostly non-fiction, and the main floor mainly fiction, with one notable exception. Along with poetry the upper level is also home to the Beat literature section, the work that City Lights became so famous and infamous for.

There is undoubtedly still a smattering of Beat literature throughout the store, but the fact that the heart of the section is upstairs suggests that the section is not meant for the casual walker by. A person wandering in off the street looking for no book in particular is probably less likely to seek out Beat literature or poetry than the well-stocked fiction section. These sections therefore are not to be stumbled upon, but are to be sought out by those with interests in poetry and the beats.

Upon entering the reading room, the thing that struck me was the amount of chairs scattered around the small room. Unlike the main floor, the poetry room is not stuffed to the gills with books, but feels more snug, a nook for reading away from the eyes of the public. A sign on the wall near one of the poetry shelves proclaims, “Have a seat and read a book.” The space feels, even from the other side of a photo, more meditative than the more consumer driven first floor (as consumer driven as an alternative bookstore can be, that is). Alongside the poetry and Beats also lies the publications of the City Lights Publishing Company. Amongst the hoards of other genres in other sections of the store, this smaller section may be overlooked, similar to how a poetry section in chain stores is similarly overlooked. By giving the City Light Publishing it’s own section in the poetry room, it draws more attention even with the limited space it is given. Considering that most of their work draws from the Beats and poetry, it seems to fit right in.

What really caught my eye in this room was the sheer amount of things that were affixed to the three main walls in the room: little words of encouragement or philosophy, pictures of famous poets, posters and even newspaper articles adorn the walls. It seems to hearken back to teenage years where random items of significance were placed on the walls as a sign of individualism, and that is exactly what it represents in City Lights as well. The bookstore was never founded in hopes of following the mainstream, but asserted its independence and creativity from its inception.

One of the more interesting of these wall decorations is placed above a private door. It reads: “A kind of library where books are sold.” It took me several times re reading this small phrase before it’s true and deeper meaning began to sink in. Although their main objective in the end may be to ultimately sell a customer a book, within the walls of City Lights, the content and the experience of reading such a book is equal to it’s monetary value.

The poetry room, although proliferated by the greatest amount of seating, is not the only place in City Lights in which small posters proclaim that the customer should take a seat and simply read. This mind set appears to go against many established feelings about books that collectors hold as true. As Walter Benjamin describes, “…ownership is the most intimate relationship that one can have to objects” (Benjamin 67). In the sphere of book enthusiasts, truer words were never spoken. We hold our books in high esteem, and collect them on our shelves, even including ones that have never been read. For a collector, “…the true freedom of all books is somewhere on his shelves” (Benjamin 64). For several years, City Lights was known first and foremost an all paperback bookstore, later specializing in alternative and experimental works that could be found no where else. It filled and continues to fill for many, the niche in a collection belonging to the truly experimental authors. But, it is not simply the possession of an object that is important and meaningful here, but what it contains inside is infinitely more valuable: knowledge. In his theory of things, Bill Brown explains, “…the experience of an encounter depends, or course, on the projection of an idea” (Brown 3). Meaning that the things that we encounter, such as books, are informed by the ideas and notions about it we possess, informing the type of experience one would have. For the booksellers of City Lights, that experience is more important than the possession of the ‘thing’ or book. Although ideas alter the experience the thing, in the case of books, the experience can also lead to the projection of new ideas, new understanding, and new knowledge. By encouraging their readers to sit down and read, City Lights is placing a much heavier emphasis on the substance of the book, rather than it’s ‘thing-ness’ within their collection.