Manhattan needs no introduction. For many of us who don’t live in New York, Manhattan is the borough that comes to mind whenever that big apple of a city is brought up in conversation. The Empire State Building, Broadway musicals, Madison Square Garden, you get the idea. Nowhere is the glamorous image of Manhattan more apparent than in Midtown, the most “iconic” neighborhood. Why? Between the shows and excitement of Times Square and the heavy concentration of shopping and dining that lines nearly every road, it is the ideal place for tourists to visit, shop, go home, and tell their friends about. This also makes it the ideal location for a business to flourish, which is why J. Levine Books and Judaica can feel right at home on West 30th street, enticing holiday shoppers with an inflatable dreidel. 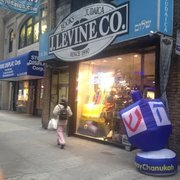 J. Levine gets festive with the inflatable dreidel.

Now there’s an image that ought to bring a warm and fuzzy feeling to your heart. J. Levine is a Jewish bookstore proud to display its identity and colorful personality. Not only that, but they advertise all of the Judaica your heart desires, from menorahs, to games, to their “Mini Zionist Action Figures.” Of course, the personality and cultural specialty of this store can only carry it so far, but it has enjoyed enough success to be described as “not the most hidden of gems.” Indeed, finding this store in the rows of smaller shops of Midtown with Times Square and a giant Macy’s to distract you isn’t as hard as it seems, thanks to its strategic place in New York’s most recognizable shopping district seen below.

Hotels are differentiated form shops and points of interest with orange markers.

How does this “place” help J. Levine? All three aspects of John Agnew’s definition of place – location, locale, and sense of place – play a role here. First, its geographic location, while not perfect, gives J. Levine an edge that makes Midtown rent rates well worth the price. J. Levine is a mere three blocks south of the Empire State Building, leaving it very close to the heart of Manhattan. Also, the bookstore’s home on West 30th Street places it on a block that can be reached with a quick turn off of Broadway, a major vein that connects it to the previously mentioned big and distracting Macy’s and Times Square. In other words, J. Levine is at an easy point of access for anyone looking to find a Jewish bookstore, especially for someone staying very close to it at one of the hotels that litter the area like the ones marked above.

The other two aspects of place provide some more interesting insight into the purpose of J. Levine’s placement. The locale is simple: West 30th Street, like much of Midtown is part of a bustling shopping district, filled with stores, restaurants, hotels, and more stores. How much the desire to be part of a massive neighborhood-sized shopping center played into J. Levine’s establishment here is the subject of a later post, but the positive effects made predictable by marketing theory are apparent. In Laura J. Miller’s Reluctant Capitalists: Bookselling and the Culture of Consumption, she explains that many chain bookstores, in order to draw in customers and put them at ease, set up locations in malls and near other major concentrations of retailers. This tactic makes bookstores approachable as part of a standardized shopping experience. The practice of this strategy is what keeps J. Levine and many other stores concentrated in Midtown. The locale is established as a place to go and buy a wide variety of goods, and is the ideal neighborhood for any store to live.

J. Levine’s greatest strength, however, comes specifically from the sense of place of its stretch of West 30th Street. Below is a street view of J. Levine, and a quick “walk” up and down the block will reveal a more distinct personality of this street that sets it apart from other parts of Midtown. Going through, you might notice some of the businesses marked in grey on the larger map above: Perfume Americana, Blikis African Fabric, and Jove Imports just around the corner. The banners on these stores will frequently have at least one word in common: import. That’s right, this is the place to go when you want to add some cultural diversity to your shopping experience.

J. Levine still stands out: it has the biggest banner on the block.

This placement makes a great deal of marketing sense. Miller’s book also makes reference to the use of categorization within bookstores to help customers interested in a certain type of book have an easier time finding the right genre with little to no assistance from a clerk. A similar principle applies here on a larger scale. Many people are interested in purchasing culturally diverse goods, and this is made simple when your African fabrics, exotic perfumes, and Jewish literature can all be found in one place. This all contributes to sense of place as West 30th Street – and by extension, J. Levine – can feel like somewhere you can immerse yourself in cultural expression through small business. Now there is a feeling you won’t get from the Macy’s up the road.

This is a different form of utilization of place than other bookstores may have. While others might seek to create a comfortable homey feel to connect to the people living in the neighborhood, J. Levine can draw on something different. The crowds of Manhattan contain heavy populations of tourists, looking not for a cozy place like home, but for the excitement and adventure of the big city, and on West 30th Street they are bound to find something more exciting than the standardized chains that can be found at home. That said, J. Levine’s selection of Judaica also makes it a popular spot for members of the local Jewish community to find the items they need. After all, the Lower East Side – which includes Jews from its legacy of immigrant settlers – is just ten blocks south.

J. Levine Books & Judaica exists in a place that is both inviting and convenient, with a proud banner and inflatable dreidel that builds on the enticing and exciting personality of the neighborhood. It all just makes you want to see what’s on the inside…