February 16, 2015Kathryn G.No CommentsPast: Place and People, Uncategorized
Not many businesses can say that they’ve managed to stay in the family for five generations, be continually in business for over 120 years, suffer three location changes and are still going strong as the leader in their field.  J. Levine Books and Judaica prides itself on being a store that can boast such an impressive history.

The company was founded in Lithuania in 1890 by Rabbi Hirsch Landy and brought to the New York’s Lower East Side when he immigrated there in 1905. Landy was a scribe who started to sell the scrolls he produced. In 1920, his son-in-law, Joseph Levine expanded the business. A small Judaica shop was opened at 73 Norfolk  street where it was located until 1963. This is the first of many instances of the next generation of Levines expanding the business to fit that time’s cultural and economic climate.

The block with the original store was torn down in 1963 and the store moved to 58 Eldridge Street, a narrow, tenement lined street in the heart of the neighborhood’s Jewish immigrant community. J. Levine’s wasn’t the only Jewish store in the area, not even the only bookstore. At that time, the Lower East Side was the world’s largest Yiddish-speaking community, with a Jewish population reaching more than half a million by 1910. At this time, Landy’s son-in-law, Joseph Levine, went on to expanded the business to become the largest manufacturer of synagogue vestments.

Joseph is also the one who introduced a pushcart to the business.

At the same time as Joseph Levine bringing new ideas to the business, an article about Jewish bookstores appeared in The Outlook. In it, the reporter amazes at the sheer number of bookstores in the Lower East Side, despite it essentially being a poor Jewish neighborhood. But what he says later makes sense when you look at the specific example of J. Levine Books and Judaica. The reporter paints a picture of Jewish bookstores that in many ways is stereotypical, but he is on to something when he speaks of the bookstore being a place where members of the community can gather. He says, “there are usually from six to a dozen men…standing about in groups discussing with every appearance great excitement”. This excitement has certainly carried over to today’s iteration of the store. The store’s Facebook page is not only full of posts, those posts themselves are often commented on or shared by the store’s loyal customers. This is today’s version of standing around in a bookshop talking to each other. The Outlook article also mentions a trait of these Jewish bookstores that is still around today. From the outside, “they look like shops for the sale of ritualistic accessories”. The windows, “are filled with prayer shawls…brass candlesticks” and many other non-book items. When looking at J. Levine Books and Judaica, this model of design can probably be accredited to Joesph’s sons.

After Joseph’s success his three sons, Harold, Seymour and Melvin, further developed the business into more of a department store of Jewish books and Judaica, similar to what it is today. Seymour handled the business and public relations side of the business. He traveled to conferences and Jewish gatherings around the country to exhibit wares. This gave the store a presence nationally as well as locally. After the brothers retired, J. Levine Books and Judaica moved to the heart of midtown Manhattan under the leadership of Danny Levine, Landy’s great-grandson. This 1986 move was a part of the “Jewish exodus from the Lower East Side”. This mass move away from the Lower East Side was largely a result of the post-World War Two economic boom. With economic prosperity came mobility, and those sons and grandsons of Jewish immigrants moved to the Bonx, Queens, Long Island, and New Jersey. As the Jewish people left, so to did thier businesses, and they were quickly replaced by the next wave of immigrants, these ones from China. By the 70’s, many Jewish owned stores began to wither and die from lack of Jewish patronage.  By the time of J. Levine’s move, the Lower East Side was becoming more and more Chinatown, a shift that though paralleling the Lower East Side’s Jewish immigration past, pushed those same lingering Jewish immigrants families away to greener pastures.

J. Levine profited at its new location, and began to gain more notice not only by word of mouth, but also by newspaper and television. In the 1990s, J. Levine started getting attention for its yarmulkes with cartoon characters on them. Though a few people were against the intermingling of secular and religious, many adults agreed that if they got kids to wear their yarmulkes more willingly than it was good. This example is just one of many that show how J. Levine is good at selling not just traditional Judaica, but also items that are more modern and are for a younger, more commercialized crowd. One only has to look at the inflatable dreidel that sits in front of the store during Chanukah to see what I mean.

In more recent history, J. Levine, like many bookstores, struggled at first to compete with online booksellers such as Amazon. To counter the loss of sales it has had to adapt, and unlike many similar Judaica stores, it has been successful. Between 2000 and 2005, sales dropped as customers turned to Amazon, but as the company has begun to get used to an online commerce environment, sales have increased, especially with the large amount of traffic on the store’s website. The store has also adapted by putting more of an emphasis on selling Judaica. Religious and ceremonial items bring in more money than books. Daniel Levine also credits his business’s success to its long history and loyal customers who appreciate the advantage of a physical store.

As I stated above, J. Levine is a nationally and internationally known business. It has featured in newspapers both here and abroad, aimed at Jewish audiences and general audiences, featured on news segments, and has even been known to supply props for TV shows and movies. A recent example is “This is Where I Leave You”, where props from J. Levine make the Jewish aspects of the movie more authentic. This is a business that knows what must be done to stay relevant. From cartoon yarmulkes to a strong online presence (including a very active Facebook page), J. Levine has been able to adapt to attract modern audiences to its store. Perhaps this idea of adaptation over nostalgia is what allowed it to move out of the encroaching Chinatown and into a more profitable section of the city, and why it is still going strong today.
There is certainly something special about this business. Current owner Daniel Levine believes that he knows why. He remarks that the business’s long history is something special because, “if you look in the Torah, the first brothers were Cane and Abel. And they killed each other. Family doesn’t tend to stick together like this”. If J. Levine continues to invest in the familiar environment it has ingrained in its history, there is no doubt that J. Levine Books and Judaica will be around for many generations to come.
— 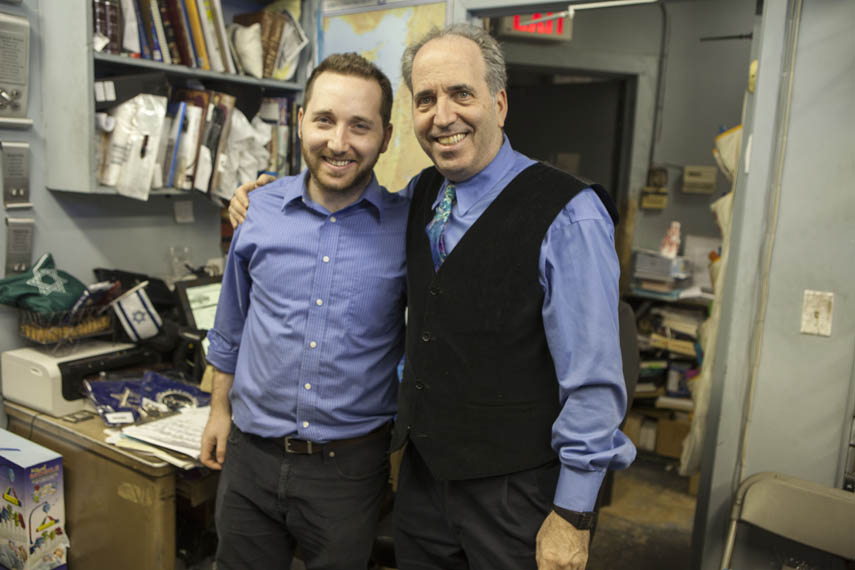 Robin, Joshua. “Sounds of New Year, The Shofar, Traditionally Used during Rosh Hashanah, Can Be a Ram’s Horn or That of Other Animal.”Newsday [Long Island] 3 Oct. 2005: n. pag. ProQuest.

All Images from J. Levine Books and Judaica’s Facebook page.