Frequently, my parents find me staring at a wall, object, or some nondescript point in the distance. Noticing the expression on my face, they ask what I’m thinking about, and will receive the usual answer: “Stuff…and things.” They may not like the lack of specificity in the answer, but it’s less of a dishonest cop-out than it might initially appear. For every thing I look at, there is likely to be a great deal of stuff my mind associates with it, taking me on a process of thought that could very well have no contextual relevance between all the stuff outside of what I’ve constructed from my own experiences. This linking between ideas (what I like to call “stuff”) and things (which are objects that act as matters of concern beyond the base function) is not a process only I can do. Let’s take a look at some of J. Levine’s bookshelves and see what you come up with. 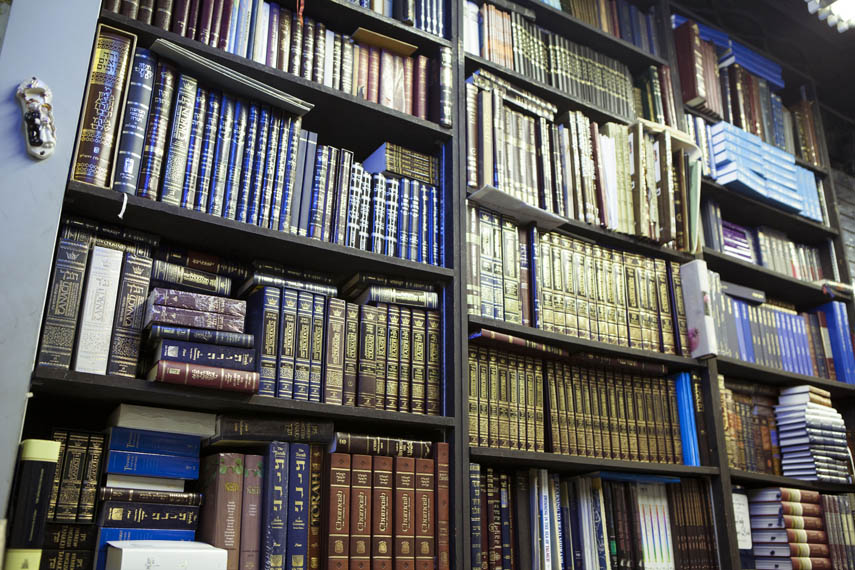 While the meanings I created from this image are likely not exactly the same as yours, there should be a significant level of overlap. Based on our own experiences, we looked at the spacing, arrangement, and content of the books in the image, and both of our minds went on a chain of thoughts and connections to reach certain ideas and feelings. This, according to Bruno Latour, is what things do to create their own sense of importance: use our experiences to attach meaning to them. With our past experiences of similar sights, the way these shelves are organized gave them a similar meaning to those past experiences, the ideas attached via that proximity.

The Levines seem to be knowledgeable of this cause and effect, and how it can apply not just to “things” in the sense of individual objects, but also “things” such as the location and grouping of objects. As is shown and explained in the diagram below, J. Levine Books & Judaica is a space organized with this association of things and ideas in mind. Each product type is grouped with others that may invoke similar feelings, allowing customers interested in one type to have a similar interest in its neighboring products. The ideas evoked by these things will guide the customer around the store, though the route taken depends on the type of customer, which ideas the customer was initially searching for, and how their path would show them the way to new things and new ideas. 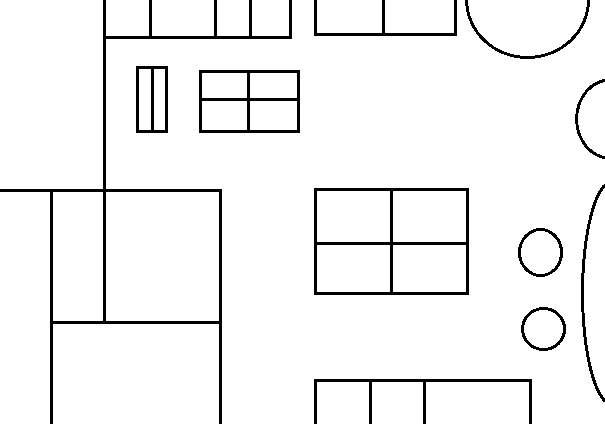 Following the arrows from the entrance and its branching paths around the store, to the back, and returning to the register creates a logical progression of things and ideas. As noted in the diagram, there are two general categories of customers: those who have come in knowing what to get, and the casual shopper. Note that “casual” should not be taken to indicate a person who does not take the Judaica seriously, but rather a person attracted more to the general idea associated with the things in each section of the store more than the specific function of each product as an object. For these casual shoppers, the path splits to designate two subgroups, each with a different idea in mind.

Those attracted to the lower section of the map are intrigued by the aesthetic idea of Judaica they can own in a collection or as decoration. Such things found in this section can vary in purpose from the culturally significant Mezuzah and Kiddush cups to the somewhat comical mini Zionist action figures. Regardless of the importance to the Jewish community of these various objects, the customer who wanders this way does so due to an idea of personal importance sparked by these things. Clifford’s essay on collecting touches on the anthropological nature behind this idea: a fascination with owning artistic and culturally significant objects. Though the things in this section of the store occupy various points on the scale between cultural and artistic, they all find their way into that niche, attracting the attention of interested collectors to one place.

Considering my consistent fixation with these figures across my posts, Clifford is likely on to something.

Customers following the other path are also interested in cultural collecting, though they focus on things that carry with them ideas of learning and enlightenment. Of course, the first selections on this path are introductory books to acclimate the reader to the values present in the more specialized and significant selections towards the back of the store, where followers of this path will meet up with the group following the other path. These books, while less visually stimulating than the Judaica in the other sections of the store, also fulfill their role as things that stimulate ideas and feelings. In fact, the placement of this front section and the back section creates a sense of progression as the customer moves through the store in a single trip, or as they gain the knowledge and familiarity to spend more time in the back with each return to the store, a transition signifying the transformation from the casual shopper to the former type that is ready to move immediately to a section that once seemed physically and mentally more distant.

Due to this layout, and the sense of progression one may feel moving through the store, a multitude of ideas and feelings attach themselves to each thing. Due to this, these things will never become mere objects again, especially in light of Walter Benjamin’s thoughts on collections. Each book in his library held significance not just in terms of content, but also with regard to the thoughts and expectations that accompanied the acquisition of each book as well as the history and memories of himself residing in each copy. Things, whether they are books or Judaica, purchased at J. Levine also have the capacity to retain the identity the customer gave them from the first glance, an identity built on and augmented by the cultural and aesthetic value of each piece as well as the memories of progression and expertise created by the space of the bookstore. This holds true for anything the customer finds. Books and Judaica. Beginner and expert. Object and idea.

Clifford. “On Collecting Art and Culture.”

Latour, Bruno. “Why Has Critique Run out of Steam?”