J. Levine and Judaica: A Place Familiar with Tradition

There are many bookstores in Manhattan, but there’s only one J. Levine Books  and Judaica. The business has been running since 1890,  and although they’ve gone through some location changes, the  place hasn’t changed much over time. The family has always had  Jewish culture and tradition at the center of their business, and  it’s no mistake that a menorah  is proudly displayed in the middle of their logo. Once you step  inside the store, it’s clear to see both the traditions the store has    kept over the years, as well as the new innovations they’ve made to  help keep their business afloat in modern and technologically advanced times.

The store moved to Midtown, Manhattan in 1963 from the city’s Lower East Side. This helped business increase, especially since the location is much closer to tourist- packed sights like The Empire State Building.The Jewish Times remarked on the success of J. Levine’s move to Midtown in an article on their website, which states that: “As more people began using Google to find bookstores, the mid-Manhattan location helped increase the traffic to J. Levine”. In terms of traffic, much of it has been online as well. The addition of their website, and other social media presence has helped accumulate more business. Unfortunately, not all businesses from their old neighborhood have been as lucky. In January, a post on the store’s Facebook page expressed their sadness concerning the recent closing of a Matzoh Factory, one of their former neighbors on the Lower East Side. The factory closed due to economic difficulties, and though  J. Levine Books & Judaica has been no stranger to economic hardship, they have adapted over the years to stay up-to-date.

Staying on this topic of traffic, any type of store usually has a sense of this flow of people, which usually follows a certain path laid out by the store. The image below is a rough floor plan of the store including videos, images, and text describing the different sections and items available throughout. 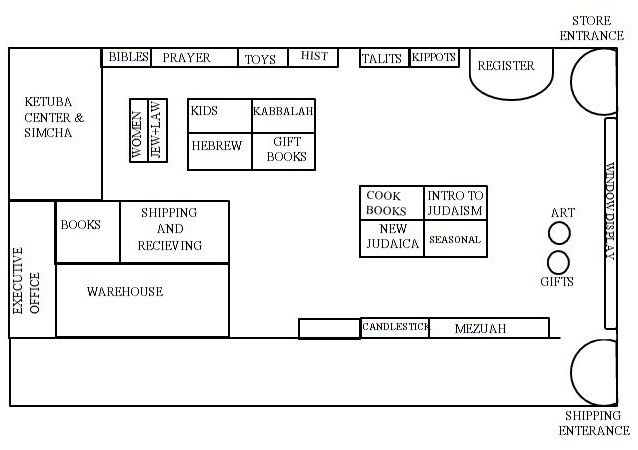 >Floor-Plan Key:
The large blue dots are for text/images
The small black dots are text only
The large yellow dots relate to staff
The red play buttons are for videos

As you can see, the layout of the store is fairly straightforward. The customer enters through the door on the right and either continues straight, toward the register where an employee may be there to help direct them toward what

they need,  or the customer may turn left toward the Judaica and gift items. The direction chosen by the customer depends entirely on the type of customer entering the store. The kids section and educational books may guide younger customers toward the back of the store, whereas cook books and home decor may lead older customers to the left.I also don’t believe it’s a mistake that the Bibles and “women’s” section are closer to the wedding center, and that the art and gift items are right behind the window display.

Why is the store organized in this way, rather than what many larger stores have been doing?  In Laura J. Miller’s Reluctant Capitalists, she describes the ways in which larger chain and standardized bookstores have been designed, where every chair is the same in every store, and each detail can be linked back to the “brand” of the bookstore. Early on her book she uses a management guide from 1922 to get her point across: “appearance, arrangement of stock, price, wages, everything is standardized instead of personal service there is standardized service,” (Miller, 87). This isn’t the case at J. Levine. The employees know what they’re selling and don’t give prepared standardized answers to questions, they care about what they’re selling and want to help their customers find what they’re looking for. To be honest, customers practically walk into the reception desk on the way into the store, with an employee waiting to help find what they’re looking for of course. This eagerness to help, builds bridges between the store and owner, between the customer and the family, between the people and their culture.

Shawn J. Levine manning the phone at the register in the front of the store

These connections were something I noticed heavily in Walter Benjamin’s Unpacking my Library, in which he writes about collecting and ownership of books. I think this translates well to the relationship between bookstore and owner, and between customer and product. Benjamin states that in terms of ownership: “a relationship to objects which does not emphasize their functional, utilitarian value–that is, their usefulness–but studies and loves them as the scene, the stage, of their fate…Everything remembered and thought, everything conscious, becomes the pedestal, the frame, the base, the lock of his property,” (60). Everything in the store has a reason for being there. Whether it is a dancing  Latke Larry figurine, or a pristine silver Menorah; there’s a connection to be made. The store owners have created this “frame” for their property, and strive to share it and the love of their culture with their customers.

A larger question remains, what can this tell us about the store? A myriad of things really, although I like to believe it revolves around the  family involvement and tradition both of and in the store. The Judaica is right up front, and so are the family members at the register. They’re front and center whereas the books and toys are in the back, and even those are organized by cultural relevance. Of course many of the books in the front of the store are the equivalent to what other stores might have as a primarily “best seller’s section”. J. Levine and Judaica puts their cultural, seasonal, traditional, and artistic items first. They’re items for the home, and what makes anyone think of home more than family, than tradition, than expression, than culture. Moving toward the back of the store, you move through one’s life in a sense, past the “wearables” many Jewish children may wear or see their family wear while they’re growing up, then onto toys and stories that remind you of childhood, until you’re onto Bibles and hebrew which are learned at a later age, until finally you readh the marriage center where you can purchase items for your wedding, and circle back to the front to pick up something for your house or family on your way out of the store. This store isn’t like any other store in Manhattan, because it breathes a story of life.

Shawn in store (taken from video)
http://www.levinejudaica.com/catalog/in-the-media-i-18.html
(images in thinglink also taken from here or website)