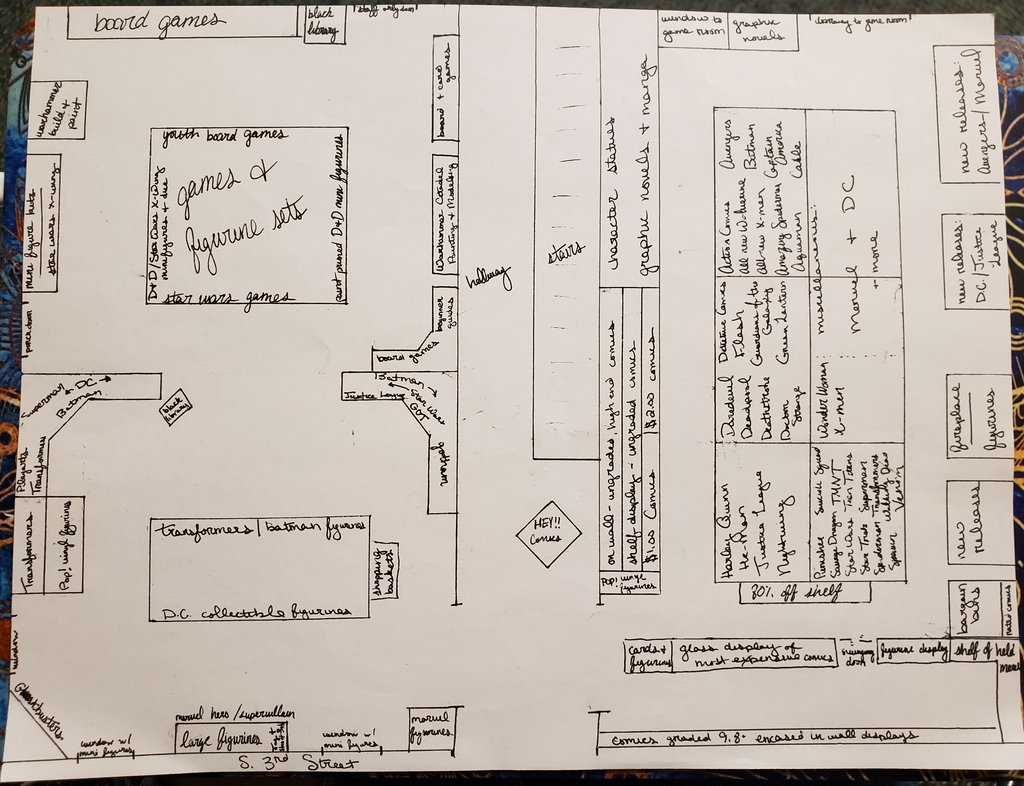 Walking into Comics Metropolis for the first time, I instinctively turned left and found myself surrounded by merchandise that didn’t exactly look like the expected comic books. So for my second visit I tried to recreate my first trip through the store,

beginning again with that same left turn, hoping to see why I chose that path over any other considering most people turn dominantly toward the right when faced with a decision such as this one.

In knowing my own habits, I prefer to shop quietly, without disturbing anyone who may work in the place. Looking to the right to see the front counter and the owners, I would naturally turn left, aka. the opposite direction, just to remain undisturbed. Mozying along the very front of the store, I see a progression of figurines in a pattern. Starting off with a shelved selection of mid-size Marvel figurines, the bright daylight streaming through the window highlights an assortment of miniature figurines on glass shelves attached to the windows. The small details were fascinating, but to get out of the blinding Saturday morning sun, I moved on.

More figurines hung on a wooden box, with the largest ones on top. The figurines don’t seem to be organized in any particular way, but are definitely grouped according to size and even what general group they might fit in with. Some Marvel super villains are grouped in columns right next to the same sect of superheroes. As I keep moving through I pass another window with more miniature figurines and come to a tall corner bookcase stocked with Ghostbusters drawing me towards it. The ghastly green coloration of the packaging brought me towards the corner where I was able to look to my right and see a clear path in front of infinitely more figurines.

The largest in its own multitude of  the collections was the Pop! brand of vinyl miniature figurines. From Disney to Star Wars it looked like a character figure existed for it somewhere in the pile. There seemed to be no rationale behind their placement, but

“For what else is a collection but a disorder in which habit has accommodated itself to such an extent that it can appear as order” (Benjamin, 60). Though it looked originally very disorganized, it was obvious it worked in the way it does as part of the natural flow of the store. The purposeful placement of the display gave its internal mess some value from a visual standpoint.

Moving right along, I gave the corner shelves a quick peek, but ultimately my eyes kept moving. This time, there was a new object in the store, a Warhammer Black Library. This new shelf space was simply a display carton specifically for its own Warhammer books and would be tossed out as soon as those were gone. It is a common type of display in chain or large retailers, but to have it in Comics Metropolis almost confused me. So being confused, I did the only natural thing for a confused person to do and I turned around.

Circling the center island I find more and more figurines, from Batman to Transformers, to numerous DC collectibles. Rounding back around to reach the final corner of the first room, there are still more, Game of Thrones (a personal favorite), Justice League, and Star Wars, drawing my eyes ever upward to Gotham. It can be a bit dizzying, but the sheer number of figurines they manage to fit so neatly is astonishing considering most of the available space is up.

Moving into the next room, I turn left yet again, into a small space without shelves where two posters hang. The adjacent door to the porch won’t allow space for merchandise, but the posters are a nice touch, framed and hanging neatly on the wall. Moving past the porch door is a large glass case. At my height are plenty of Star Wars X-Wing products, which are very popular right now according to Laura Payne. Above my height is a multitude of mini figure kits. While the theme of the last room may have been collectibles, these collectibles are a step above as they add a hands on component.

The entire room is about being interactive with materials, circling around the room there are quite a few board games, covering at least one wall and part of another, plus they have a section dedicated to younger people and children. Along with the mini figure kits, there are individuals hanging around the center island already primed for painting. For convenience, there is also a station with the paints used specifically for this purpose, which I mentioned in my second post, Comics at Home.

While I could get lost in the stacks of board games and mini figure painting supplies, I somehow manage to peel myself away, through the first room and back to the main foyer. There sits a hallway and staircase through the middle of the house, and a small carousel of HEY!! Comics waiting to be perused. Turning the corner into the main room, on my left are still more of the Pop! vinyl figurines in various characters. Moving right along, there are comics galore.

On the leftmost wall are high end comics, moving down into the shelves they turn into a menagerie of dollar comics and two dollar comics. Keeping along the outside edge of the room, a new case brings graphic novels and manga, a nice window into the game room I spoke about more in Comics at Home. Another shelf houses even more graphic novels until I reach the doorway to the game room, where Star Wars X-Wing seems to be a frequent flier.

Rounding the corner brings two racks of new releases, a fireplace with another set of figurines on it, and still another rack of new releases. I’m starting to think this shop has everything when I see the bargain bins ahead of the front desk. They are entertainingly placed not more than 5 feet away from the display of the most expensive highly rated and limited edition comics in the shop. But turning back around to the center island is the main feature of the store.

Overall, my passage through the store was marked by astonishing feats of shelf height with purposeful groupings. I noticed most people when they first walked in did in fact turn right, especially regular customers, whether they had something on hold or not. My way might not be the most common way to go, but in the end I don’t think it really matters because “The critical history of collecting is concerned with what… individuals choose to preserve, value, and exchange,” and it is all grouped in a way that makes sense for the space of Comics Metropolis (Clifford 221).

All Images Courtesy of Sydney Smith