A Treasure Hunt Through Square Books

The area around people influences the way that people look at things.  The owners of Square Books in Oxford, MS, the Howorth’s, seem to keep the area of their store in mind when setting it up, since one of the first bookshelves you see next to “Just-In Hardcovers” is “Mississippi Literature”.  Bookstores tend to represent the area around the store in the front part of the store.  Where Square Books has, “Mississippi Literature”, a Books-A-Million in central Pennsylvania has books about guns, and a store in northern New Jersey has Weird New Jersey next to a section on local authors.  It took a bit of team effort and one not so helpful phone call to the main store, to get a general layout of the three floors of Square Books.

Along with that, Square Books, like many other bookstores, show off their new arrival books, just inside the entrance on tables in the front of the store as well as by the checkout area, where customers are more likely to see them. 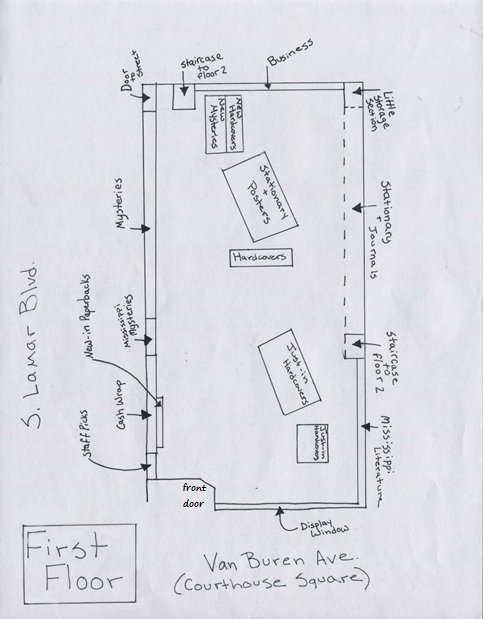 While constructing the floor plan for Square Books, we noticed that some areas and placements do not make much logical sense.  But, what does not make sense to me, might make sense to the owners, whom actually chose the layout of the store.  As Benjamin mentions in “Unpacking My Library”, “The phenomenon of collecting loses its meaning as it loses its personal owner” (Benjamin 67).  As I noted earlier, “Just-In Hardcovers” and “Mississippi Literature” are in the front of the store, but beyond that, things get a little weird (for me anyway).  On the left, next to the cash-wrap (registers), is “Mississippi Mysteries”, which I suppose goes along with the front set up, but I do not know that I have ever seen “Mysteries” and “Crime Novels” be near the front of the store or at least on the main floor.  Then there is “Business” in the back, up against the far wall, along with a table of posters and stationary, with “New Hardcovers” and “New Mystery”.  “Mystery” and “Business” seem to be the least sought-after books, in my experience with bookstores.  But what doesn’t seem to make sense at first, might actually make more sense, when I considered the placement of the stairs.

People are naturally very curious, so when we see stairs and realize there is more to the store, we have to explore it.  Square Books reels in their customers with “Just-In Hardcovers”, people like new things and on the wall display next to that is “Mississippi Literature”, which is interesting, especially to tourists and first-time customers.  Immediately after that are the stairs that go up to the second floor.  So, by my observation, people won’t see the “Mystery” section until they come back down the stairs, which are right across the way, almost like an afterthought, making it purposefully ignored the first time around, as those are not usually the sections that people will spend a lot of time looking through. 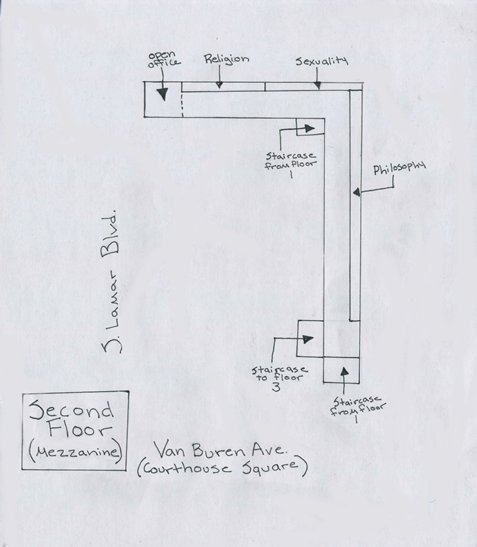 Going up along the stairs are stationary and journals, which line the walls. “Philosophy”, “Sexuality”, and “Religion” are on the second floor of Square Books, which is more like a hallway, since the first floor has high ceilings, and sounds a bit cramped, spatially, but actually overlooks the first floor.  These three things are often put together in most bookstores and are seen as a higher brow of literature, but I know I have a tendency to look through these types of sections just to see how many authors I recognize and to look more intelligent for looking at things that people hardly ever read for fun.

This brings us to the third floor of Square Books, which is where things got a little confusing.  While we pieced together this floor, we noticed a bit of disconnection between the subjects.  Where having “Music” and “Poetry” next to each other, we did not understand having “African American Literature”, “Nature” and “Science” right next to them.  This is where I saw that flow of the store break up a bit, because if I was looking at the “Nature” section, I would not think that “African American Literature” would be next to that and “Music”.  They have a large display of “History” books across from that area, but “Southern Studies” is all the way on the other side of the third floor.  So, I was curious as to why “Southern Studies” was not set up more as a subsection of “History” in the way that they have “Biographies” and “Literary Nonfiction” next to each other in the café.

In looking over the different genres and where the owners placed them in the store, I’m reminded of something Clifford said in “On Collecting Art and Culture”. Clifford states, “To see ethnography as a form of culture collecting highlights the ways that diverse experiences and facts are selected, gathered, detached from their original temporal occasions, and given enduring value in a new arrangement” (Clifford 231).  I’d like to think, based off this concept, that whomever did the layout of Square Books, simply applies different emotions and meanings to these sections than I do. Just basing this layout on pictures and videos of the store, I don’t really know what style/subgenre of books they have in each section aside from the general labels each section is given.  Like for “African American Literature”, I don’t really know what kind of books they put in this genre.  Is it fiction, nonfiction, more historically based? Is it about African Americans or by African American authors?  It is a bit ambiguous with its current placement in the store and in its contents, as are many of the other sections.

In this middle section of the third floor, is the café where as I said before has “Literary Nonfiction” and “Biographies” on one side and has a small shelf of “Young Adult” on the other with a section labeled “On Writing” against the partition.  I wondered about the significance of this placement, particularly the “Young Adult” section, which might just be the younger generations inclination toward coffee type beverages, but it seemed a bit in the middle of nowhere to me.

The setup of the Square Books’ main store bases itself off the idea of the “top shelf”, but in this case, it is more like, “top floor”.  I say this because, it is not until you’ve gotten to the third floor and through the café when you get to the “Fiction” section which is usually a go-to place for people walking into a bookstore.  It also seems odd that Faulkner would be all the way in the back corner in the same area.  I would think that would be something that they would display more openly as a way to maybe congratulate people on making to the third floor.

One explanation of this is it being like the pot of gold at the end of the rainbow.  The customer has no choice, but to walk through almost the entire store before they get to the “Fiction” section.  They also have to walk through the café, which is another way for the store to make money, since the smell of coffee is so enticing.  This is also the section of the store that people usually find the “top-shelf” books.  So in a sense, Square Books is like a map to find the buried treasure, you have to make it through the rest of the obstacles to find the “gold”.