On the Shelves of Gotham Book Mart

Gotham Book was always a traditionally small and cozy space. The very first location was a brownstone basement and Steloff would put books outside for customers to look at and to entice them inside. The inventory of that location involved into mostly theater and costume books because of the clientele, which started Gotham Book Mart off on its reputation for having rare and hard to find books available. The second location was much larger, though still cramped inside, as the space was packed with books and the aisles were narrow in order to fit as many shelves as possible. In the second location, there was a backyard and garden space where Steloff would hold parties and talks, with tables for outdoor book displays. I’m going to focus on Gotham’s Diamond District location, 41 West 47th Street, which is where the shop spent the majority of its time.

In 1946, Gotham Book Mart moved a few minutes away from its previous location to a new, bigger space. The new building didn’t have a backyard, but it had a back room and multiple stories that Steloff could make use of. In the book In Touch With Genius she talks of how many of her customers didn’t even realize she was in a new location, due to it being so close to the old one. Instead, they just remark about how she’d widened the aisles and added a back room. 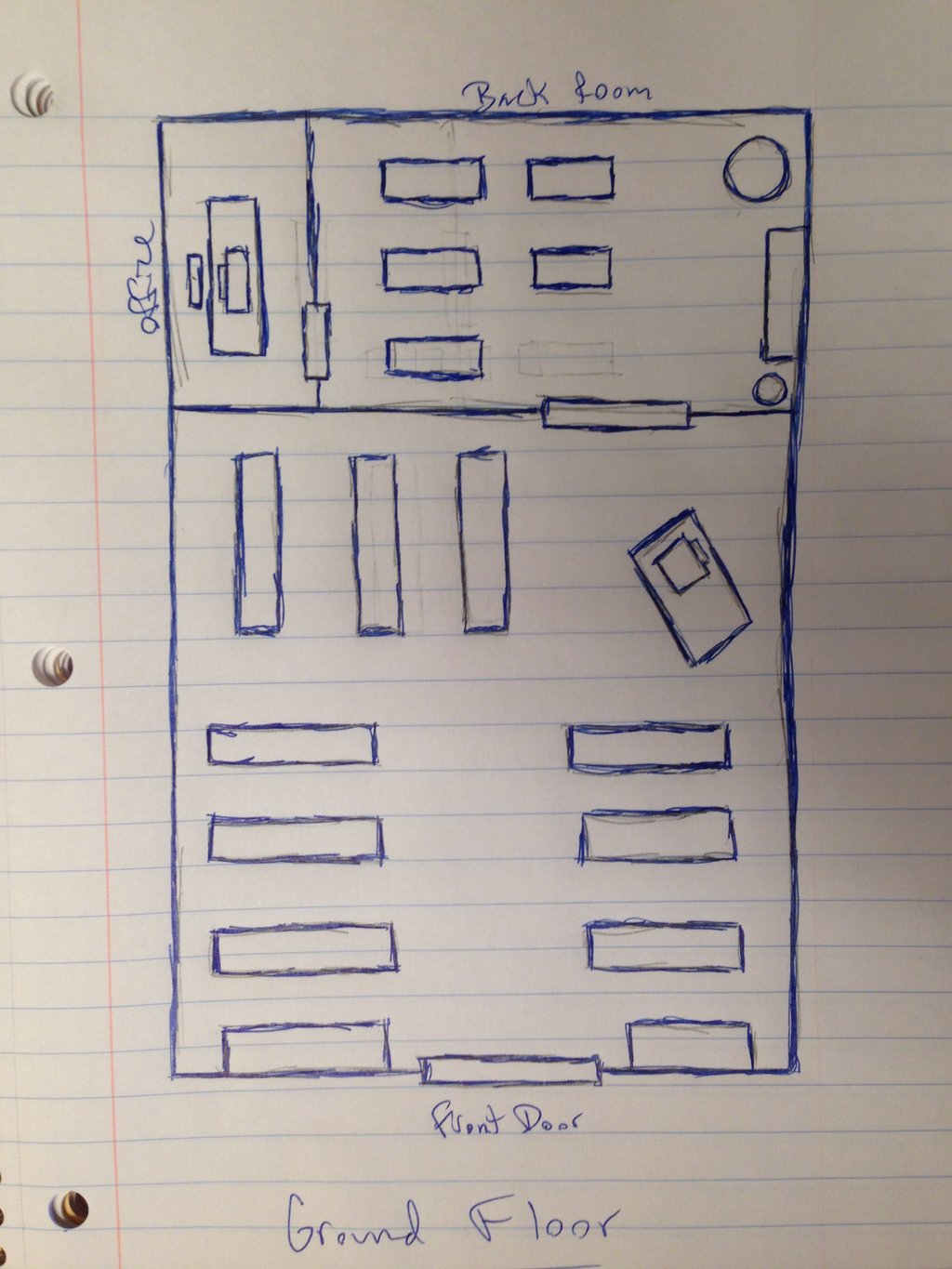 Gotham Book Mart specialized in rare books that were difficult to obtain, and that stayed true throughout its moves. Steloff organized her stock into three basic categories: new, secondhand, and rare. The experimental writers were kept separate on the shelves from the more traditional writers and there was a section for first editions as well. On the ground floor of the building, there was a back room filled with shelves on which rested the rare books. There was also a locked case that contained especially rare and fragile books, and the customers weren’t allowed to handle those books without an employee looking over them. In the corner of the back room, there was a Buddha statue and a bronze bust of James Joyce done by Jo Davidson and autographed in the original clay by Joyce himself. Most of the things in the room were on wheels or were collapsible so that they could be easily moved out of the room and folding chairs could be moved in the case of a lecture or reading being held there.

The cellar was off limits to non-staff and contained Gotham Book Mart’s overflow stock and books that Steloff was holding on to until they could be sold, since there was not a return policy with the publishers until later and Steloff was fond of holding onto books until there was a desire for them. This book storage cellar was generally referred to as “the cellar”. The second floor of the shop was a gallery where Gotham Book Mart would display various artists’ pieces and hold exhibitions. The James Joyce Society also held meeting in the second floor gallery after it was founded. Steloff lived in an apartment on the third floor, which had French doors leading out to a balcony that faced and overlooked 47th street. After her death, the third floor apartment was converted into a rare books room. The fourth floor was likely used for further storage, and the fifth floor became the living quarters for Andreas Brown, to whom Steloff had sold the store at that point.

Sources don’t really go into specifics about what genres graced the shelves of Gotham Book Mart, just that they were generally rare and secondhand books, as well as new books by unknown of little known authors. I imagine that there were still a number of theater or costume books left over from Steloff’s time in the theater district, as well as some titles deemed obscene that Steloff defended. In her memoir, she mentions a man coming in and looking for a book with an illustration of a specific stained glass pattern, which, after looking through several books of stained glass illustrations, he was able to find. She also stocked small literary magazines and new publications from poets and authors that she felt deserved recognition and that she wanted to help. These were usually displayed towards the front of the store in her other locations, so I assume that it would be the same in the 41 West 47th Street location. After Steloff’s death and Brown took over running Gotham Book Mart, the stock changed slightly. The store still specialized in rare and secondhand books, but they also branched out into other merchandise, such as T-shirts that were sold in conjunction with gallery showings for different artists.

Something Benjamin talks about in his article, Unpacking My Library, is that things have value, but the value that it has comes from the person inspecting it or possessing it. Things are only valuable if people want them, which is something Steloff knew. This principle was mostly the reason beh ind her buying up the last of someone’s print run and keeping them for years until someone came in who wanted them and who would buy them. Instead of putting these books on the shelves as soon as she obtained them and not getting a lot of money for them, she would instead wait until they became a little more difficult to find or perhaps until the authors was better known and people wanted to read their earlier works. By waiting for the value people placed on these books to increase, Steloff could get more money for them, so they also became more valuable to her as time went by. The idea of having a responsibility to your books or to your collection can also be applied to Gotham Book Mart, especially the rare books that customers weren’t allowed to handle without supervision. Gotham had a responsibility to protect these rare and sometimes fragile books and it was also the customer’s responsibility to treat these books well and to protect them.

Gotham Book Mart, even in its larger locations, was always jammed full of books, with books filling the shelves, stacked on top of the shelves and on tables between the shelves. It exuded a cozy atmosphere and surrounded the customer with literature and pictures of literary figures, so that he customer was completely immersed in books and in literature.

Frances Steloff, In Touch With Genius