Recently, I decided I needed some organization to my book collection. I own approximately 200 books that span three small bookcases and one medium-sized bookcase. The organization method I chose may seem chaotic to some, but it is perfectly organized for me. It took almost four hours to get my books just how I wanted them. I cannot imagine how long it would take to organize well over a million comic books in a 60,000 square foot space, but that is exactly the task the staff of Mile High Comics had to undertake when opening the Jason Street Mega Store to the public.

An overhead view of the store

This warehouse store was not originally meant to be open to the public. It was meant to be just a warehouse for Mile High to store the comics to be placed on the online store and as storage space for the other locations that are solely retail stores. It was due to popular demand that this massive comic book store was opened as a place for anyone to come and enjoy. According to owner Chuck Rozanksi, it is the “largest single comics facility in the world.” Of the warehouse’s 60,000 square feet, 45,000 square feet are dedicated to retail space. The other 15,000 square feet are offices, conference rooms, and other such rooms.

Mile High Comics’ Mega Store on Jason Street in Denver is a haven for comic book lovers of all sorts. In this space, they can find almost any comic they may desire. From the well-known comics from Marvel or DC to lesser-known independents, from old to new, Mile High stocks them all. Whether you know exactly what you are looking for or you just want to browse, you could easily spend hours in this store, amazed by the sheer size of it. 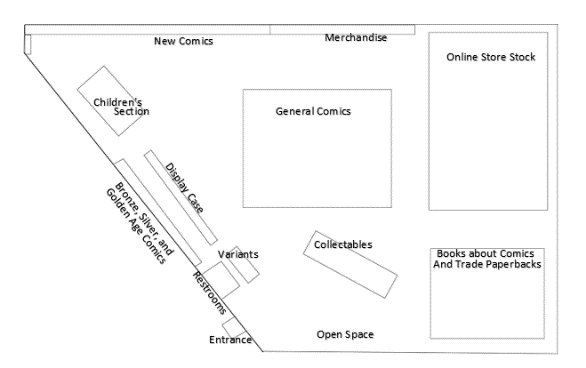 As seen in the floorplan above, the organization of the store may seem somewhat unconventional, though at the same time it makes perfect sense. Everything has its place, even if it does not seem like the place has an apparent reasoning behind it. That is the beauty of a collection, which is what this store is – one massive comic book collection that just happens to be available for purchase, bit by bit. This organized chaos reflects how Walter Benjamin speaks of his book collection in “Unpacking My Library.” Benjamin says that a collection is “a disorder to which habit has accommodated itself to such an extent that it can appear as order” (60). Mile High’s Mega Store embodies this disorderly order.

When one first enters the store, the shock of its immensity hits. Where to go first may be a difficult decision. In discussing the store’s layout, I will follow the path of Chuck Rozanski in the tour he gives in this video.

An example of one of the variants created through Mile High

First, he takes the viewer to the case of variants. It is in this case that the store displays the variant covers that were made possible through Mile High Comics. The company likes to support independents and small presses, and these variants are one way they are able to do that. Since these are toward the front of the store, it shows that they want to emphasize them as they are items not found in other comic books stores as they were created because of Mile High.

Taking up a very large portion of the wall and the space next to the variants are the Gold, Silver, and Bronze Age comics dating between 1933 and 1982. These comics are for avid collectors and are quite pricey. Customers are separated from these comics by a long glass display case because these are so valuable. More of these comics are in this display case. Employees are stationed behind this case to help customers with the comics they desire.

Toward the back of the store is the children’s section. It’s full of bright colors and comfortable seating to entice children and make them want to explore the section and read comics. Rozanski wants young people to feel welcomed in the store, so he created this special section just for them.

The new comics line the wall opposite the Gold, Silver, and Bronze Age comics. This section spans one hundred feet. This collection is believed to be the largest array of new comics in the world. The store tries to keep all comics printed in the last six months in stock here and they are constantly replenishing it.

The center of the store is lined with long tables with many boxes full of comics. These are the general comics that are great for people on a budget. This section holds comics that are priced at either one or two dollars and a vast assortment of comics can be found here. One hundred thousand of these comics are priced at one dollar each. Although these comics are cheap, they are still in great condition, often near-mint. These comics are priced so low so that anyone, no matter how much they have to spend, can come to the store and find something to purchase. It makes collecting available to all.

The new comics and the one- and two-dollar comics are all organized alphabetically. This is so all types of comics get equal attention. Instead of separating them by publisher, as many comic book stores do, Mile High Comics wants to give all comics the same status. That way independents are next to big names such as Marvel. This allows browsing customers to discover comics they never have before, which promotes a passion for all comics, not just the more traditional ones.

Some examples of the toy collectibles

The store sells more than just comics. There is a section of various types of paraphernalia that is mostly comprised of action figures and the like. The store also has a collection of trade paperbacks and books about comics. This helps to attract yet another type of reader. For those who want to learn more about comics, this is the place to go. On display, there are approximately 50,000 books in this section.

Last, but certainly not least, is the section that holds the stock available for purchase on their website. These long, tall shelves hold 200,000 books. They have such a large stock so they can accommodate every collector’s needs.

In order to organize such a vast collection, one needs to know quite a bit about comics, which works out for Mile High because most of their employees are collectors themselves and are very passionate about comics. In Reluctant Capitalists, Laura Miller stresses the need for booksellers to be knowledgeable about what they sell. She designates a difference between “booksellers” and “staff,” with booksellers making a “career a consequently keep up with the happenings of the industry” (200) and staff just seeing it as a temporary job. With this distinction, the most employees of Mile High would fall under the category of “bookseller” because the company is more than just a job to them.

Mile High Comics is really about the collector and the passion for comic books. They take pride in having the largest collection of all types of comics. The Jason Street store reflects this pride and passion.

All images in ThingLink are screen grabs from this video: https://www.youtube.com/watch?v=k65zYbArejE&list=WL&index=7