A Haven For Nerds Through Time: The Mile High Comics History

When I was 13, I went to school, came home, read, and had little worries in the world beyond that. I read the occasional comic, but they were never my favorite. When Chuck Rozanski was 13, he decided that the world needed more comics. From his parents’ basement he founded what would later become the worlds largest comics retailer: Mile High Comics. What started as him selling at flea markets and conventions as a individual salesman, soon turned into the first brick-and-mortar store in Boulder, CO, in 1974 (Mile High Comics History). Though this store has since been taken over by Time Warp, it was still a milestone in the chain’s history (Anonymous, “Interview”). 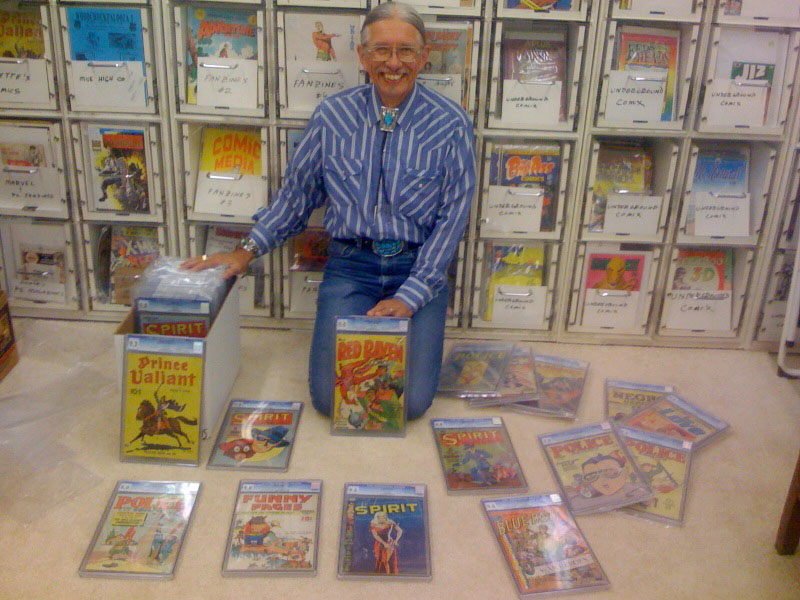 Since the founding of this store, Mile High Comics has gone through a lot of development. By 1977, Chuck Rozanski could already count 4 stores part of the chain. He was only 21 years old and already the leader of a growing comic empire (Mile High Comics History). December of that year, by a fortunate coincidence, Rozanski was able to purchase the Edgar Church Collection. This amazing find consisted of roughly 16,000 comic books from the “Golden Age”, the late 30s to early 50s. This brought about a change in Rozanski’s business (Duncan). With profitable sales, he was able to make enough profit to invest in a large warehouse situated in Globeville, Denver, which is mostly paired with the central Highlands, one of the trendiest and most diverse districts of the city (Denver “Highlands”).

Initially, the book lover just used this warehouse for storage. Then it went over to open one day per month, then to every weekdays, and then, in 2012, the warehouse was eventually opened to the public seven days a week. By doing this, Rozanski created “the largest single comics facility in the world” (Rozanski “Tour”) . The gigantic Jason Street Mega Store has been home to many events which it is able to host due to its huge interior. Just last December they held their so far largest auction of comics, figurines, and books that featured around 1,200 items and was directed mainly to children and other buyers on a budget (Rozanski “Update”). In addition to this vast facility and the three other stores in Denver, Mile High Comics gets a large number of online orders from all over the world (Mile High Comics History). This development has been facilitated by creation of the store’s the website in 1997 (Wayback Machine “1997”).

An overhead view of the Jason Street Megastore.

Understandably, Chuck Rozanski is very proud of this empire he created. When I called the Megastore to ask some questions, his employees assured me that had he been available, he would have talked my ear off. “He likes to talk. Look at all the reports he wrote on the website!”, is what I got from a friendly store assistant (Anonymous, “Interview”). This made me wonder about him. From the videos he posts on his Youtube channel you can see his dedication to the store and sharing the love for comic books. His passion reminded me of Christopher Morley’s quirky, book loving character Roger Mifflin. He’s a traveling bookseller in his novel Parnassus on Wheels and regards his vocation a salvation for the people. Now look at Rozanski’s quote from the beginning of the post again. Though he and Roger Mifflin might be in completely different fields of literature, you can see that they share their love for books and are eager to share it (Morley). The Denver Center for the Performing Arts: a landmark for Denver as an intellectual and artistic metropolis.

Rozanski probably chose Denver as the home for his stores because that’s where he lived. While researching, I wondered how much his decision has shaped the location, though. When we picture Denver, some of us are going to think of the Broncos first. The well-known football team is home in Colorado’s capital. Other people, like me, who don’t know anything about sports, will probably at least have heard the nickname “Mile-High City”. What we don’t necessarily hear about is Denver’s flourishing artistic and literary influences. Alongside art galleries, museums, and concert halls, the city claims on its website that “Denver is home to a performing arts scene to rival any other city” (Denver “Arts & Culture”, “Performing Arts”). In addition there are several public, as well as private, and specialized institutions of higher learning. Maybe this is the reason why the city does not just have the standard Barnes & Noble to offer. Numerous independent bookstores were founded here throughout the 20th century. Several of these have by now branched out in the Denver area, much like Mile High Comics (Snyder). The poster for the Denver Comic Con 2013

A possible indicator of Rozanski’s impact is Denver’s reception of comics and nerd-culture, which has been flourishing over the past few years. In 2010, the Comic Book Classroom was founded, an association whose aim it is to increase the literacy of Denver’s youth. Their reach grew in June 2012, when they hosted the first ever Denver Comic Convention (Denver Comic Con “Our Story”). In the few years after its founding, the con has already made a name for itself and has attracted more attention to Denver’s literary fan culture. This has become indispensable for the local economy and indeed, 75% of the exhibitors are local to Colorado. Chuck Rozanski and his staff have been part of this amazing project since the very first convention . In the meantime, the attendance of the event has increased from around 28,000 in its inaugural year to 87,000 in 2014 (Denver Comic Con, “What We’re About”). Because of its proximity to the Jason Street Store (by car the convention center is only about 12 minutes away), the store has been able to complement the program of the con; with its large interior, the team was able to put up a stage and host a pre-party with cosplay, performances, and book signings (Rozanski “Tour”, “Pre-Party”). Seeing not just the team’s but also the customers’ dedication to the place brings to mind Tim Cresswell. In Defining Place, the author writes about what makes a random space an actual place. According to him, places are “spaces are which people have made meaningful. They are all spaces people are attached to in one way or another”(Cresswell). This seems to be exactly what Rozanski has in mind. You can see that he does his utmost in order to render this rather plain, huge warehouse a place and not just a space. This doesn’t just apply to this store, but the entire chain. Chuck’s own picture of his 2006 SDCC booth

Prior to the founding of this comic con, the store has been exhibiting their products at the San Diego Comic Con for many years. This very famous convention is “the largest (…) of its kind”  and the past years have regularly attracted around 130,000 people (Ewalt). In spite of a lifelong cooperation of the SDCC and Mile High Comics, Chuck Rozanski announced the end of his appearances in 2014. Already in 2006, he complained about the masses of visitors that were hard to handle. After 2014’s con, though, he is done with San Diego for good. To blame are the publishers, who apparently sell their comics for so cheap that it is impossible for vendors to compete (Mile High Comics “Final SDCC Report”). It looks like there are two sides to this, though. When reading comments from convention regulars, it becomes clear that there seems to be a lot of bad blood between customers, other vendors, and Mile High Comics. Commenting voices claim that the prices are “unrealistically high” and that they should “change their name to MILE HIGH PRICES” instead (Melrose).

Marvel’s The Avengers (2012): One of the many Superhero movies based on comics.

With many sellers putting their comics on Ebay for cheap, the question of market value of comics does come up. This question doesn’t seem of concern yet, though. According to insider Gus Lubin, “the comic book industry is on fire”. The reason is pretty obvious, and most of us have probably contributed to it: the increasing popularity of superhero movies and TV shows. Partly because of this, but also because of an increase of comic quality, the number of comic bookstores that has alternated throughout history, has not gone down over the past few years (Lubin). Specifically Mile High Comics still has four stores, even today (Mile High Comics “Stores”).

This, however, is not a concern to address at this point. Whether the comic book industry will recede or prosper in the future is hard to say now. What we can say, though, is that throughout the almost 46 years of Mile High Comic’s history, the face of both the store and Denver’s attention to comics and nerd culture has evolved greatly. The concluding timeline of important events in the store’s history visually displays the evolution it has gone through.