Regional and Personal Expression: The Books of DJ Ernst

On a dreary Wednesday afternoon, I walk into DJ Ernst Used and Rare Bookstore. The owner–affectionately known as Homer–greets me from the check-out desk three quarters into the small, one-room store. The walls are lined in red wallpaper, old photos, and clippings from various magazines and newspapers. Busts and memorabilia line the shelves along the walls, and, just like everything else in the store, even the shelves themselves vary in size, shape, and materials. In a display in the middle of the store, books are stacked in make-shift shelves made from vintage wooden orange crates and on a table. The store holds decades of work and dedication to the collectors who come work with Homer online from around the country, the Susquehanna University students who stop in regularly, and especially to the Selinsgrove community that inhabits the land around it. 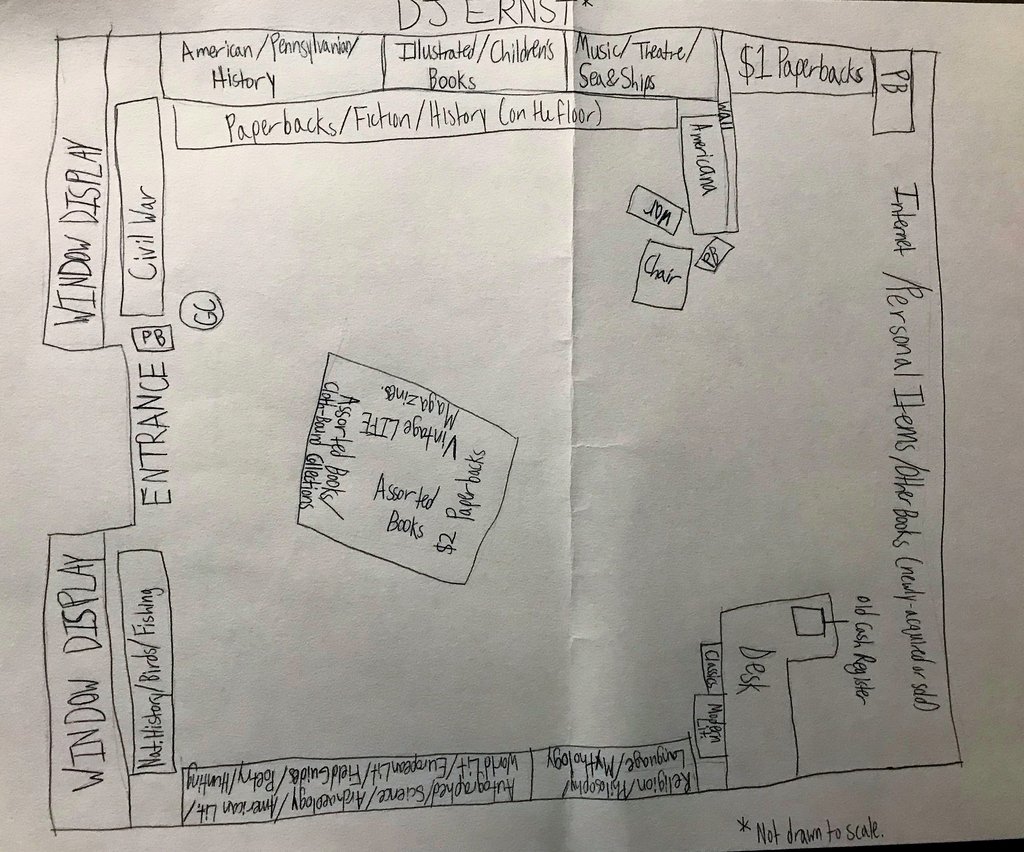 In regard to the local community, I say especially because of the configuration of the room. As Gilda Bruckman of the feminist bookstore New Words put it, “how we featured books had a big effect on who came in” (Spain 88). The same can be said for DJ Ernst. As mentioned in my last blog post, Homer’s main customers have always been those who wanted to learn more about American–and Pennsylvanian, in particular–history. If this is his main market, it’s no surprise then that the history books should be towards the front of the store and or in the window displays facing Market Street. On the other side of the store, books on hunting, guns, birds, and other subjects a hunter or nature enthusiast needs also sit at the front of the store. This isn’t a coincidence, either; many people in the Susquehanna Valley hunt and fish. In addition to this, being so close to the Susquehanna River increases the need and desire to have these books in stock for the community and to make them easily accessible to customers.

Major community members (regardless of their more temporary living situation) are the Susquehanna University students and faculty, who may come in to peruse Homer’s collection of philosophical texts or his collections of low-price poetry and fiction. He even keeps music books in his stock, and his relationship with the school’s Creative Writing program means that he carries faculty publications, which sit in a shelf in front of his desk. DJ Ernst is a place where students can feel a part of the Selinsgrove community and participate in it, while also providing a place to engage in conversations with the books and with Homer, as the comfy armchair between the shelves and the sales desk suggests. The space is small and meant to facilitate a dialogue regarding the books and what lay between their covers.

Not far from that armchair, I notice the amount of books about ships and the sea on the same wall as the history books. While they fit into the history section, there seems to be a special reason why there are so many. When I talk to Homer about them, he smiles excitedly.

“I’m a really big fan of ships,” he says. “Those are some of my favorites.”

For some reason, this surprises me. Despite knowing his love and enthusiasm for many of the books that come into his store, it still seems like a strange idea that someone would stock their favorite books in their store, even if they may not sell as quickly as everything else. Throughout her book, Reluctant Capitalists, Laura J. Miller talks about chain bookstores and how their book selection process and floor plans have been rationalized and standardized over the years, meaning that, regardless of what state or town I’m in, I can walk into any chain and find a similar layout and similar (if not the exact same) books on the shelves. Often, these books are able to sell quickly and have larger audiences. The chain bookstore stocks what sells in every store, and maybe only provides variation in books about the particular state the store is in. Having grown up in stores like Borders and Books-A-Million, I could always find the same books in the almost the exact same place in any store.

On the other hand, Homer ultimately decides what books are in the store and how they’re set up in the space. This contributes to the idea that DJ Ernst is more than an independent store; it’s a personal store that’s based in a person’s interests and understanding of the community in which it resides. Homer isn’t relying on national bestseller’s lists or national trend studies; his own interests and the books his customers are looking for (as well as whatever used books end up in his possession) create the stock. The bookstore’s personality (a major selling point independents use in competition with the chains) is formed by and for Homer and the community.

Continuing with the previous idea that what’s available and easy to access informs who the customers are, Homer also happens to stock books that only a collector can imagine having. Here, the idea is not so much about what’s in the book, but rather what the book is and how old it is. As I talk to Homer, he points to some books stacked on the floor. He tells me that they’re early-edition Oz books, and my eyes grow wide. Such books would cost a fortune; I know that even if I had my wallet on me, there’s no way I could even afford one of them.

“People are always looking for copies of these books for their collections,” Homer says, delighted that I’m amazed by the bright hardcover books. “These’ll sell quickly.”

It’s clear that these aren’t the paperbacks that I’d find on the floor of the main part of the bookstore. These books are special, almost like gold. They could have serious deformities on the inside–a printer could have messed them up and made them illegible–and someone would still want them because such rare books are unique. Not everyone can say they have a full collection of early-edition Oz books, after all. Sometimes, a book has meaning beyond what’s between the covers. Merely owning these books, knowing their history and how their stories influenced American pop culture, is enough to shell out a thousand or two dollars. The book becomes, as Miller and booklovers the world over call it, a sacred object, something worth special treatment and reverence. Even if these books end up shipped off to another state, just having them there infuses the space with an air of importance.

Before I leave, I take a glance around at the eclectic mix of books along the walls and on the central display table. I look at them and see the imprint of the community and of the uniqueness of the books on the place, and I see how they’ve made the place both communal and personal.