Selling Books and Gay Pride – a look inside Giovanni’s Room

There is very little opportunity for a customer to question what type of bookstore Giovanni’s Room is upon entering the shop. Although the walls are white, the store does not lack color due to the multitude of gay pride flags, posters, decorations, and items for sale. That is not to say that the store’s interior is overpowered by symbols of gay pride; the walls are all lined with floor-to-ceiling shelves that hold the thousands of titles available to Giovanni’s Room customers. Once inside this bookshop, one is presented with an extensive variety of gay and lesbian literature as well as LGBTQ resources and community information. The centrality of books to Giovanni’s Room is certainly not lost amid the visual declarations of gay pride that decorate the bookstore’s space.

A colorful section of Giovanni’s Room.

Giovanni’s Room’s storefront proudly displays the traditional gay pride flag and this assertion of gay identity is similarly projected throughout the interior of the store. Behind the cash register are two large gay pride flags and numerous rainbow colored decorations are hung from the ceilings. Not only do the colors of the rainbow enter the space through intentional decorating, but they also are found in many of the items for sale, such as license plates and dog tags. Lastly, the store interior is made even more colorful by the thousands of book spines and covers that occupy shelves and tables. Even though the walls, carpeting and other furnishings are plain, the store has a very energetic and exciting ambiance simply due to the product displays and decorations.

In addition to consideirng the general atmosphere of Giovanni’s Room, it is interesting to think about the physical layout of the objects within the store and the how spatial relationships between objects inform our understanding of the shop. Bill Brown states in his article “Thing Theory,” “… These are questions that ask less about the material effects of the material world and of transformations of it. They are questions that ask not whether things are but what work they perform – questions, in fact, not about things themselves but about the subject-object relation in particular temporal and spatial contexts” (7). In this statement, Brown touches on the importance of considering what objects and spatial relationships can communicate, including “how they organize our private and public affection” (7). The way in which Giovanni’s Room is organized and sectioned off affirms the idea that “things” perform work and have significance because of their transcendence above a mere object to a “matter of concern” (Brown). For example, Brown explains, “You could imagine things, second, as what is excessive in objects, as what exceeds their mere materialization as objects or their mere utilization as objects – their force as a sensuous presence or as a metaphysical presence , the magic by which objects become values, fetishes, idols, and totems,” (5). Certainly in Giovanni’s Room, the items within the store bear a presence that elevates them past mere objects; they communicate values and ideas that are important to consider because of their possible effect on people and society. Considering this importance of items and spatial relations, here are some reflections on the “things” in Giovanni’s Room, how they are arranged, as well as why these “things” might be significant for understanding the bookstore.

As mentioned in previous posts about Giovanni’s Room, this bookstore specializes in gay and lesbian literature and printed resources for the LGBTQ community. The store has thousands of titles available in the store and thousands more available through their website. Since there are so many publications available in this two-story building, it is not surprising that the store is broken down into dozens of specific sections. Although some relationships between grouped sections are obvious, others are questionable as to how they relate and why they would be placed next to each other. Here’s a look at the organization of the lower level of Giovanni’s Room: 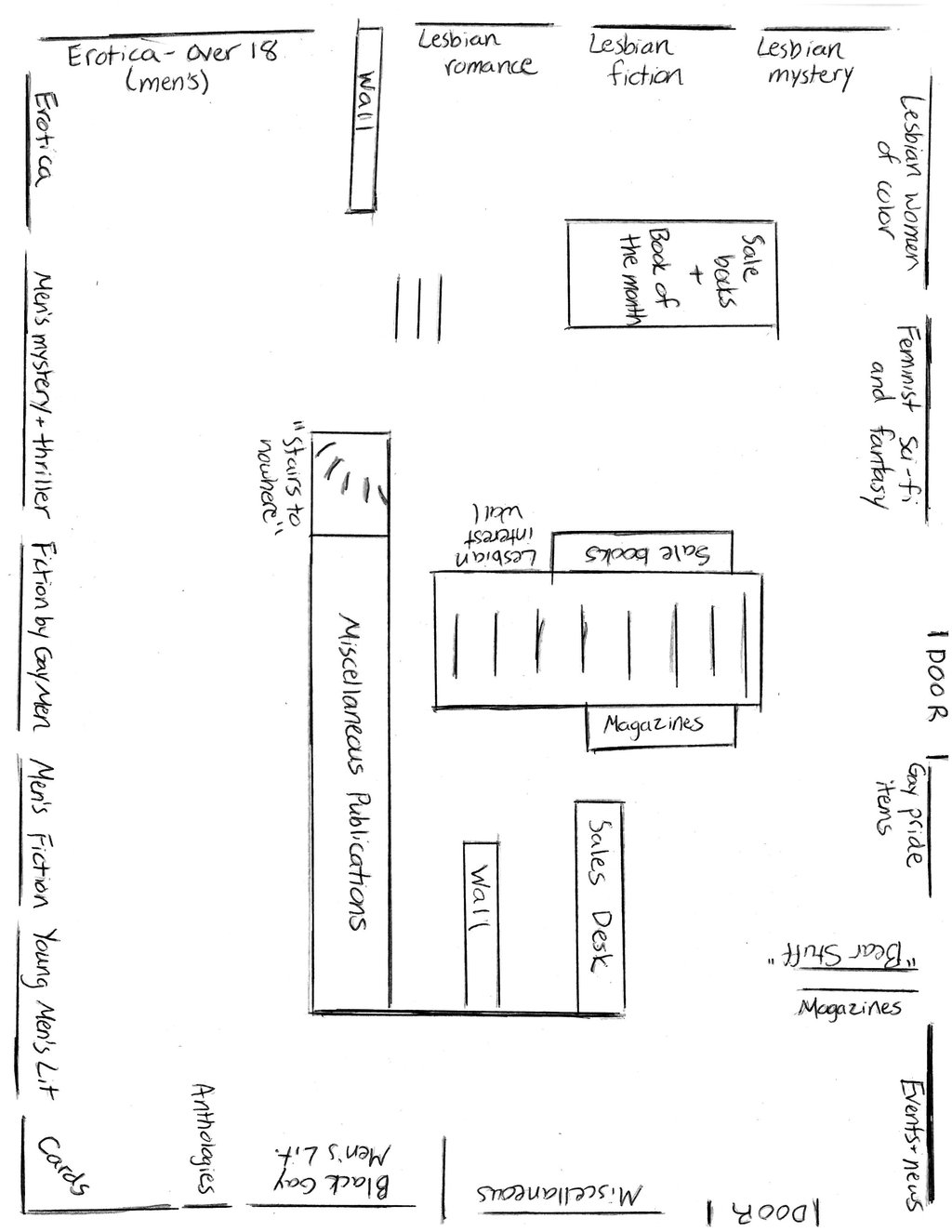 When one walks in the door, directly on the right are community materials, such as the newspaper, The Philadelphia Gay News, event announcements, and business cards. In addition to these printed materials, condoms are also located in this area, which immediately suggests that the store houses materials about and for sex. After walking past the sales desk, the magazines, and the gay pride items, one will come to a corner room devoted solely to lesbian literature with the subsections of lesbian mystery, lesbian fiction, lesbian romance, feminist sci-fi and fantasy, and lesbian women of color writers. This part of the bookstore is completely packed with books from floor to ceiling and is also filled with tables for books on sale and the book of the month. This section seems very logical in its subcategories, which is also true for the back room that is devoted to gay men’s literature, such as gay

The lesbian section – clearly the shelves are very full!

mystery and thriller, books by and about gay men, black gay men’s literature, and young men’s gay literature. The difference between the lesbian and gay sections on the lower level comes down to the erotica section, which is only found on the men’s side; there is no section specifically devoted to women’s erotica. Also, when one looks at the physical space dedicated to lesbian literature versus gay literature, it is evident that the men have more space and books throughout the whole bookstore. Perhaps this is related to the three original founders who were all gay men; there has not been a woman in ownership in Giovanni’s Room’s history except for a very brief period a few decades ago.   Besides a few random or miscellaneous sections, the lower level of Giovanni’s Room is very simply divided between gay and lesbian literature. The upper level, however, is not so straightforward. There is much more variety in the subsections upstairs in addition to other types of media, such as CD’s, DVD’s and posters. Here is the layout of the second floor: 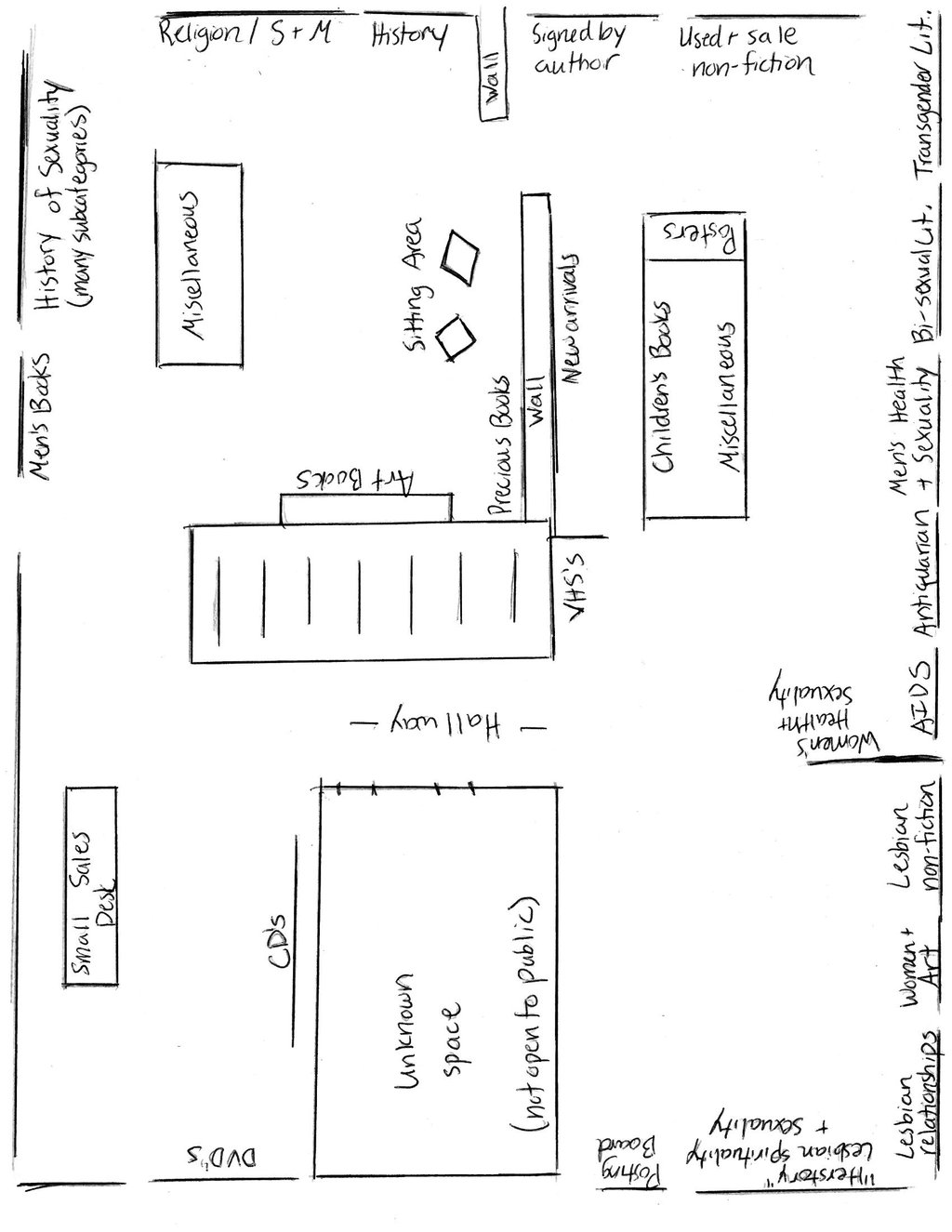 This floor has a very different character than the lower level; it is very open and receives a lot of natural light, it has several seating areas, which invites customers to sit and stay awhile, and it contains many unrelated subsections of books. An interesting aspect to the second floor is the shelving devoted to transgender and bi-sexual literature. Gay and lesbian literature each have their own room downstairs, but these two sections only receive one shelf each in the back of the second floor. When looking at the numerous subsections placed in this back room, it is evident that these titles are somewhat miscellaneous and not considered as important to the bookstore. Another section that seems a bit sparse is the “Herstory” section that focuses on feminist non-fiction, lesbian spirituality and

A very sparse shelf of the “Herstory” collection.

sexuality. Almost all of these title are placed cover-out instead of spine-out, which indicates that there aren’t even enough titles available to fill the shelf. One last interesting arrangement to note is the combination shelf that holds books in the “religion” and “S&M” categories. These don’t seem to naturally go together and can possibly be seen as in conflict with each other, yet they share the same shelf. Certainly compared to the first floor, the arrangement of the upper level seems a bit of a conglomeration and lacks a clear cut flow or order. The subsections are all clearly labeled and therefore orderly, but the arrangement of the subsections does not lend itself to a logical flow or direction through the store.

Maybe it is the broad diversity of publications in Giovanni’s Room that prevents the store from exhibiting a general order or flow. The bookstore caters to many groups within the LGBTQ community and therefore has a little something for everyone, but all of these “little somethings” might be forced to cohabit shelf space with something else unrelated or even antagonistic. Considering that Giovanni’s Room cultivates a resource-center atmosphere, it might be okay that boundaries are not clear cut and choices in spacing do not seem logical or completely relevant. Perhaps the general atmosphere of gay pride and community is more important to Giovanni’s Room than the layout and flow between sections. In his article, “The Judaica Section,” Laurence Roth writes, “… buying books isn’t the only reason why many of us are drawn to bookstores. We also go to converse with ourselves among others, to be in a public ‘private’ space that offers community of objects and people within which we might discover how we feel, what we’re thinking, who we are” (52). Not only do the people at Giovanni’s Room foster a sense of community inside the space of the bookstore, but also the objects themselves contribute to an atmosphere of community, pride, and learning. The physical space of Giovanni’s Room may not be all that logically organized or sectioned, but the kind of space the bookstore offers is perhaps more important for those who come.