Strand Bookstore: A Space of Separation

Escaping reality is a large motivator when it comes to reading. The act of reading puts you in a world that is not your own, whether it be genre fiction or literary fiction. Last week I interviewed Strand employee Brianne Sperber, who said “Customers love to shop at Strand because they love to get lost in the stacks. There are rows and rows and rows of books everywhere—it can be very easy to spend an entire day here and still not see everything.” This suggests that Strand customers are looking to be whisked away from reality, if only for a few hours at a time.

When walking in to the bookstore, there is an onslaught of merchandise, bestsellers and staff picks. These sections are meant to draw in the customer. A little past these tables are the New York travel guides, cookbooks and history, all aimed at getting tourists more interested in the store. Even farther behind that begins the fiction stacks. One of the most interesting things to me about Strand is the fact that it is trying to draw in tourists. The entrance to the store is concentrated on getting tourists hooked so that they will move farther and farther into the stacks.

From what I gathered by looking through some online reviews of Strand is that not as many people know about the vast amount of books waiting in the basement. This is what confuses me about the organization of Strand. With all the goods at the front to draw tourists in, the store loses emphasis of the basement, except with the locals who know it is there. This might be because the basement has mostly non-fiction and bargain books, which may be less demanded by tourists. With the selection of bargain books in the basement, that is where a lot of locals must flock to and get lost in the stacks. It seems counterproductive to draw tourists in backwards towards fiction rather than up and down to the other floors. It just goes to show how much emphasis society puts on fiction rather than non-fiction and things like young adult and art books that wait on the second floor.

This separation of locals and tourists could also speak to the phrase “citizen consumer” because with bargain books being in the basement where more locals venture, it is easier for them to support the bookstore by buying the bargain books.

Sperber said that fiction was th 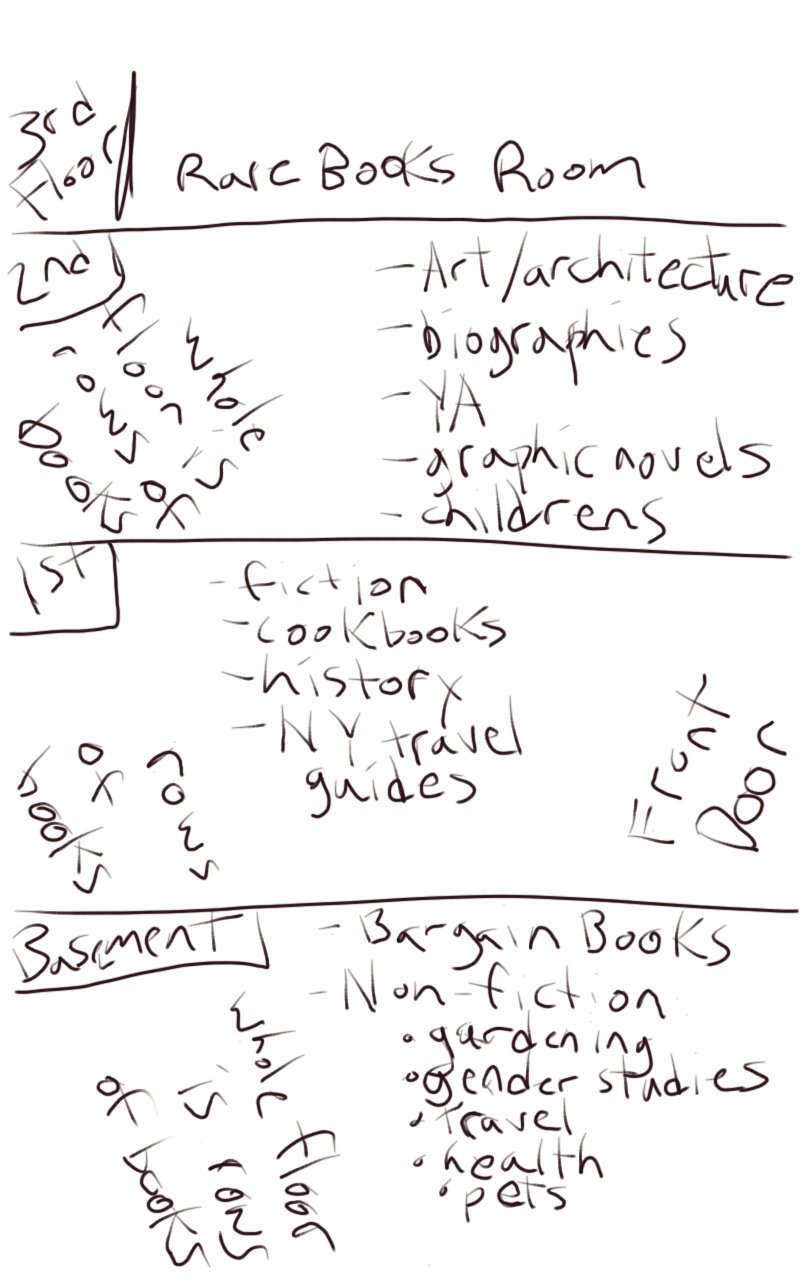 eir leading genre when it comes to sales. It seems like this is so because their main floor is taken up mostly by fiction. Most of the other genres are either upstairs or downstairs, but as mentioned before, tourists aren’t pushed toward the stairs but rather back toward the fiction stacks. The other issue that gets run into with this set up is the fact that most of the children’s and teens books are on the second floor. This suggests that there is a separation not only between locals and tourists but also between children and adults. With the way the store is organized is pushing for families to head to the second floor rather than the first. This could be problematic since parents might want to browse the fiction section but children would be browsing solely on the second floor.

While on the topic of separation, I would like to point out that while I am not certain where the science fiction and fantasy section of the bookstore is, I can easily infer that it is most likely on the second floor with young adult fiction and graphic novels. This suggests a third separation, a common one between genre fiction and literary fiction. If I am correct and it is on the second floor, that means Strand purposefully split the genre section from the fiction and put it upstairs with the children and young adult books. This means that independent bookstores have somewhat of the same opinion of those kinds of books that chain bookstores do. Tim Cresswell writes how some bookstores feel that “’Our place’ is threatened and others have to be excluded. Here ‘place’ is not so much a quality of things in the world but an aspect of the way we choose to think about it—what we decide to emphasize and what we decide to designate as unimportant.” This suggests that bookstores are specifically thinking less of science fiction and fantasy writing, which leads them to organize it with the young adult books rather than with fiction.

Steven S. of Rocky Mount, VA, commented on yelp.com that “if you’re looking for any pretty typical modern bookstore creature comforts (nice bathrooms, comfy chairs, coffee), they’re not here. There’s no room!” This is one of the aspects of Strand that I really love. The store is so full of books that there is no room to sit. That means that right off that bat, this store will attract a different kind of customers than a Barnes and Noble would. Barnes and Noble is meant as a hang out spot, a public place to browse books and buy coffee and talk to friends. Strand is the opposite. Strand wants customers to lose themselves in the stacks, and having no sitting spots allows for just that. Several other yelp.com comments mentioned how there would be people sitting in between the bookshelves reading on the floor. This is one of the few aspects that makes Strand feel more like an independent and less like a chain. 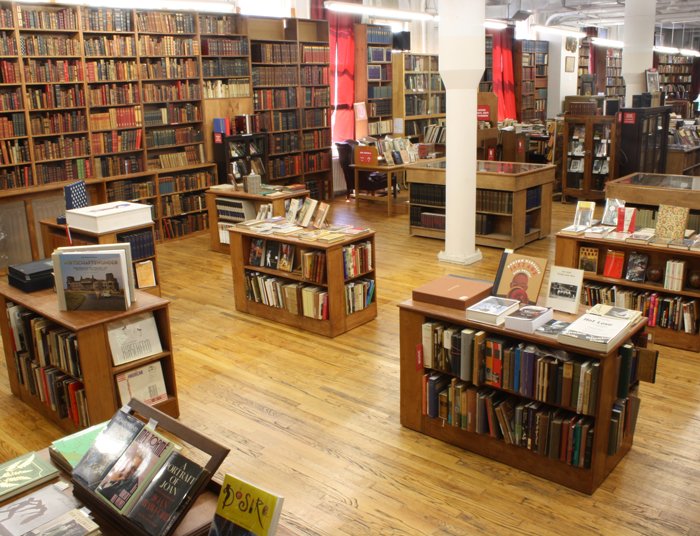 Another aspect of Strand that is organizationally intriguing is the fact that the rare books room is on the top floor. It makes sense that it would be but at the same time, it feels as if Strand is hiding away the most “elite” section of the bookstore. It is the kind of thing that you would only know about if you really take the time to browse the store.

The organization of Strand bookstore offers several common ideas of separation, between tourists and locals, adults and children, and genre and literary fiction. These sometimes subtle separations become much clearer when you take a deeper look at the space and organization that defines the Strand. Though to some degree these separations happen in every bookstore, it seems more pronounced in the Strand. Strand is the kind of bookstore that is teetering on the edge of feeling more like a chain bookstore than an independent. Having these separations that are slowly but surely becoming more common makes it seem like Strand is heading in a chain store direction rather than keeping with their original independent bookstore.