(Not) Stranded In the Past

Map of the Book Row on 4th Avenue

The Strand, at present, holds almost 3 million books in its three story building as well as a warehouse and kiosks in Central Park. It is one of the most well-known and beloved independent (but certainly not small) bookstores both in New York City and America at large by all booklovers. The Strand’s beginning is a story of survival. Benjamin Bass opened the Strand Bookstore (named after a street in London famous for gathering writer like Thackeray, Dickens, and Mill) in 1927, with 300 dollars of his own money as well as another 300 from a friend, on Fourth Avenue, then known as “Book Row.” But Ben Bass went all in and even put his personal book collection on the shelves for sale. Book Row contained almost fifty bookstores and six city blocks, but the Strand is the Highlander of Book Row (minus the decapitation), being the only bookstore originating from there still open today. But the Strand caught many lucky breaks in its early history, such as a generous landlord who would give rent breaks in times of hardships. Fred Bass, Ben’s son, was learning the ins and outs of bookselling by the time he was thirteen and would take over management of the store in 1956. Unfortunately, their landlord died in 1957 and Fred made the decision to move the Strand to greener pastures at its current location on 12th Avenue and Broadway in the same year.

History of the Strand on Dipity.

Not one to rest on his laurels, Fred would expand the Strand beyond the brick and mortar of his building, bidding on space in Central Park for a book kiosk (NYC’s attempt to create a more Parisian feel for the city) in the 1960s that you can still visit on fair weather days (probably not the single digit weather as of this writing.) This would become one of the Strand’s most fruitful ventures with the kiosks racking in more than $300,000 in 2011 for a rent of $40,000. Even the kiosks least successful year, they managed a meager $211,935.15 in 2008. Some even worried about the Strand’s state of affairs when they hadn’t yet put a bid on the space in 2012. But the Eddie Sutton, general manager of the Strand for more than 20 years, said that, “We’ve had the contract and we’ve not had the contract.” The Strand has even taken over another vendor’s lease after the vendor encountered financial difficulties. The Strand has become such a monolith that even losing several hundred thousand dollars a year is a drop in the bucket to them. A long way from using an old cigar box as a cash register. 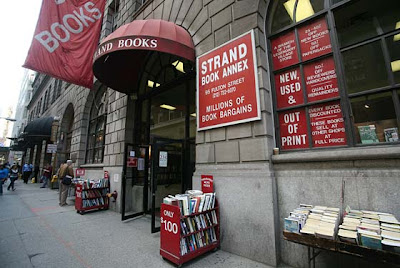 Not simply content with a few kiosks in a park, Fred also opened the Strand Book Annex in the 1980s on Front Street in the South Street Seaport, eventually moving to Fulton Street in the Financial District in 1996. Sadly, the Annex had to close on September 22, 2008 due to a 300 percent rent increase. One blogger reported the closing of the Annex by saying:
“Last week I thought I was having vertigo when I couldn’t find the Strand Book Annex downtown on Fulton Street near the South Street Seaport. It didn’t even occur to me that the roughest and toughest bookstore in all of New York City could just be gone. I guess 9/11 didn’t hit me hard enough. OFFICICAL [sic]: the Strand Book Annex is gone and the city’s already a little cleaner and a little less interesting. Good luck finding a used book that’s guaranteed to smell like burnt coffee combined with the reek of mildew from the water-damaged carpet in the children’s section. Anyway, if they replace the building with a Crunch Fitness Center I’m gonna eat my hipster slang dictionary.”
Another regular of the Annex said, “This city needs less banks, less Duane Reades, and more bookstores.” In addition, construction on the street limited the Strand from placing their customary book racks on the sidewalk outside. Fred himself said, “Sales just fell tremendously after the construction began.” However, no employees were laid off as a result of the Annex folding, something practically unheard of in most American industries, let alone the retail industry with only five percent of its workers unionized. But Strand employees unionized in 1976 under the United Auto Workers Union (a much more diverse group of unioneers than just auto workers) so Strand proved itself another exception in a history of exceptions. But before the Annex closed its doors, Fred Bass bought the building on 12th and Broadway for a cool eight point two million in 1997. Fred no longer paid rent to a landlord, he was now in control of his destiny (and certainly to avoid any rent increases that the Annex would succumb eleven years later.) More recently, Fred has taken on more help in the form of his daughter Nancy Bass Wyden (married to Ron Wyden) who gained a position as co-manager in 1986 at the age of 25. Fred, now 85 years old, still actively works on the floor of his family legacy.

Family-owned businesses are often beloved and respected because of their comforting and familiar attitude to customers who try to make them feel at home. Some businesses, the Strand included, treat their employees like family, with very low turnovers and people working for decades for the same family. But a sea change occurred in 2011 with a contract dispute between the 150 non-management workers and the Strand. Some employees believe the change happened when the Strand starting bringing on managers from Borders after the chain closed and creating a more “corporate” atmosphere into the workplace. Strand management attempted to get the employees to agree to a new contract that would slash benefits in half and double health insurance premiums. The management also tried to create a two-tier wage system, a system that has been used previously to bush unions by pinning senior and junior employees against each other.

The rejected contract also included a wage freeze for eighteen months, where previous employees would get a 25 or 50 cent increase every six months. Also, management also bought out some of the oldest employees by giving them a week’s pay for every year they’ve worked at the Strand. Some employees also alleged racial discrimination, a pregnant employee was almost fired for taking time off for doctor appointments. And one employee, Saundra Buchanan, claimed that Nancy Bass came into the bathroom and said, “You should be using the bathroom on your break time!’” Strand management claims that they needed to cut costs with competition such as e-books muscling in their profits. However, that claim rings false when the Strand bragged of breaking record profits in the 2011 Christmas season. But on June 15, 2012, Strand employees accepted a new contract and reported feeling more invigorated about belonging in a union.

The Strand Bookstore as a whole has a rich history but seemingly not much nostalgia. But this isn’t necessarily a bad thing. Starting out on “Book Row” the Strand might have sustained itself in a neighborhood that tells all bibliophiles what to expect. But simply relying on your physical neighborhood to bring in the dosh doesn’t always equal success. The Gotham Book Mart in its beginning relied heavily on its theater neighborhood to survive, and only by luck did it. As W.G. Rogers says when R.H. Burnside buys three hundred dollars worth of stock, “For the second time, proximity to the theater center where people in theory didn’t read had kept her business from foundering” (Rogers 76). The inverse for the Strand may have easily become reality, the other bookstores on Book Row stayed where they were, but the Strand moved to the more central and touristy Broadway. Throughout its history, the Strand has been more about bringing books to the people and not simply the people coming to the books. The kiosks, the Annex, these are/were all reachings out to the community at large. Had the Strand simply stayed on Book Row, the Strand might have become another footnote in the supposed “death of the indie bookstore.”