I believe that the Books-A-Million at the Susquehanna Valley Mall in Selinsgrove PA, doesn’t really have a specific direction to go thought. Most book stores are made to draw you to a specific point in the store or to take a certain path around so that you shop the most. I believe that this store is organized in many different, smaller paths.  But before we can get into the different ways to go about the store, we have to first look outside the store itself.  Often times in the center of the mall, just outside the doors, are a bunch of tables that contain various different books. Sometimes it is a featured genre, and others it is just a sale  I believe that they may even do used book sales there at some points, but I may be mistaken.  In both windows you can see individual on one side, there is a whole Harry Potter display, while on the other is a display aimed towards parents of young children.

Now let’s look into the store. The first thing to catch my eye is the gaint “Kids” sign in the back of the store. If you are a teenager or college kid, this os probamy not what you’re looking for. If you are one however, and you are just browsing around looking for nothing specific, you will most likely go straight to the board game section just to the left of the enterance.  When browsing through this section it is really just random as to what you’ll find. With the rerelease of Bakugan, the store has begin to sell them. They also have many different themes of game. There is a Legend of Zelda section, with clue, Monopoly, and other games in the theme. Then there are the sections by game with themes within them. There is a section of Munchin packs, to include marvel and DC, and a section of Codenames with more themes.

Continuing on in this direction we find the manga section. This is a large section that contains many of the most popular manga. Many youth read these, so it makes the most sense to have this section directly next to the games. Behind this, is the manga counterpart, the comics. The comic section features mostly Marvel, with some smaller articles mixed in. Alongside the comics are the Role Playing Games. RPGs are a game that used to be very popular before technology became a part of every day life, but fortunately has started to regrow into an amazing amount of players. The most popular of these games are Magic the Gathering, and Dungeons & Dragons. I don’t really know anything about Magic, but I definetly know D&D. At Susquehanna University I can think of at least 5 different groups of people who play it on a very regular basis, and I am in 3 of them.

Our next stop on the Teen to College tour is the young adult section. This is just beyond comics and RPGs, and contains many of the books that are sought after by high school students. These books include, but are not limited to, The Hunger Games, Divergent, and Harry Potter.  This section is also accompanied by a small fiction section. I use the word “small” very lightly here because it is a fairly substantial amount if it’s the first thing you see, but there is also a much larger section across the store. Why are they separated? I have no idea.   This is really the end of our exploring student journey, other than going to the other side of the store and looking at all the random little pillars that have various card games and trinkets on them, and then going to the other fiction section across the way. 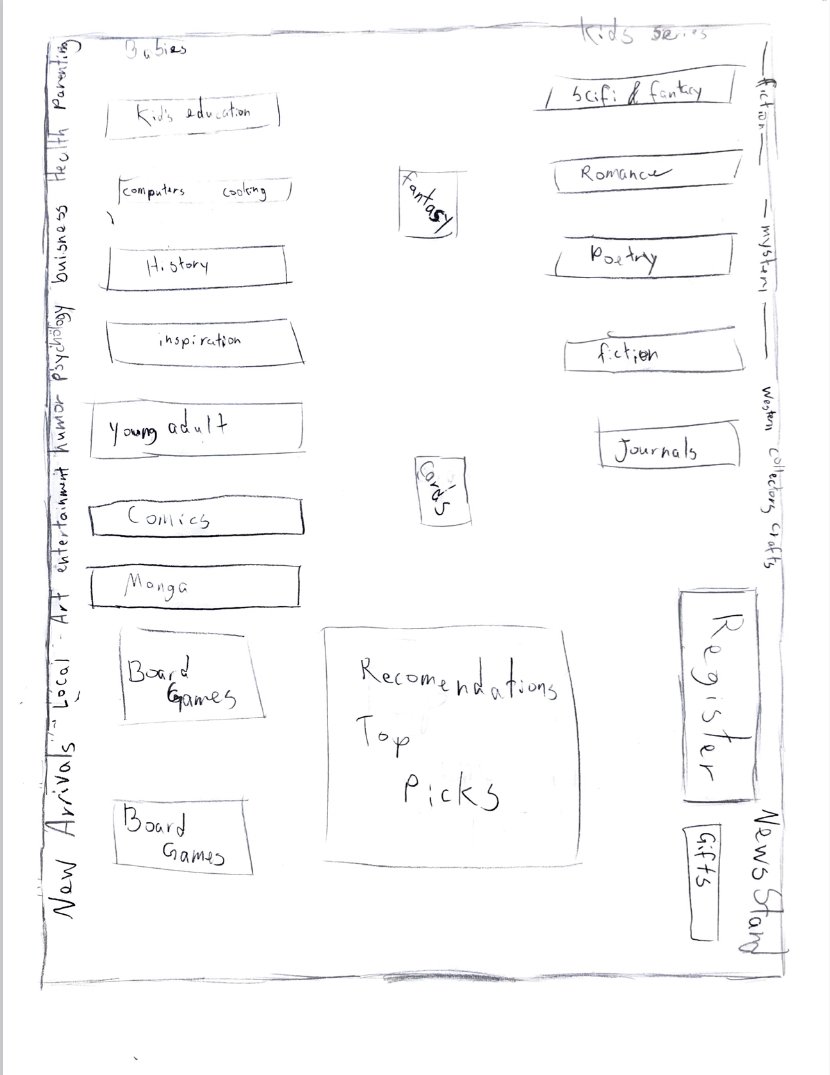 Looking at the map, there are two more main paths we can take, although they are sort of connected in that they are both parents and young kids. If you are a brand new parent, or expecting, then the back left is the corner for you. This section has parenting books, books for babies, and books for very young children. Along with these books are little games that help to educate your younglings and make them the best minions, I mean, children you could ask for.  In the other corner are books for older children who are learning how to read and trying to advance their reading skills.  This section slowly tansitions towards the front of the store into the other, much larger fiction section. This is where the younger kids can get all the books they really want, like the Warrior series, and the Bunnicula books.  This is also where older children can find their books that aren’t in the “young adult” section.

In the center of the room are 2 large support pillars. As any good store would do, they turned these into fancy little displays for all their larger, more popular card game like cards against humanity.  Around the cash register you can typically find some little chocolates, which are always placed in just the right places that you have to stare at them while you are waiting to, and actually checking out of the store. So inticing to just buy one, or a dozen.

There are 2 more large stops in this store, but large only in their size. The Newsstand, and the New Releases. These are both located on the walls, just inside the store. The Newsstand is on the right, and the New Releases section is on the left. Around the walls of the store are other little sections that you can see on the map above. I think this is all there really is to the store. In my opinion, unless you ar going in their looking for one specific thing, then it is really just wandering strainght into the game section.