In 1920, Frances Steloff paid the first month’s rent for a basement apartment that she turned into a bookstore, she called Gotham Books and Art. Her first payment of $75 covered a twelve-by-fifteen feet sales floor, a three-by-three feet window display, and a ten-by-fifteen feet kitchen that she could gain access to if need be. Six months after her first payment, her stock of 175 books increased and began to overflow the sale floor. Steloff’s reaction was to get access to the kitchen area and use it as a secondary sales floor for her rare and out-of-print books. 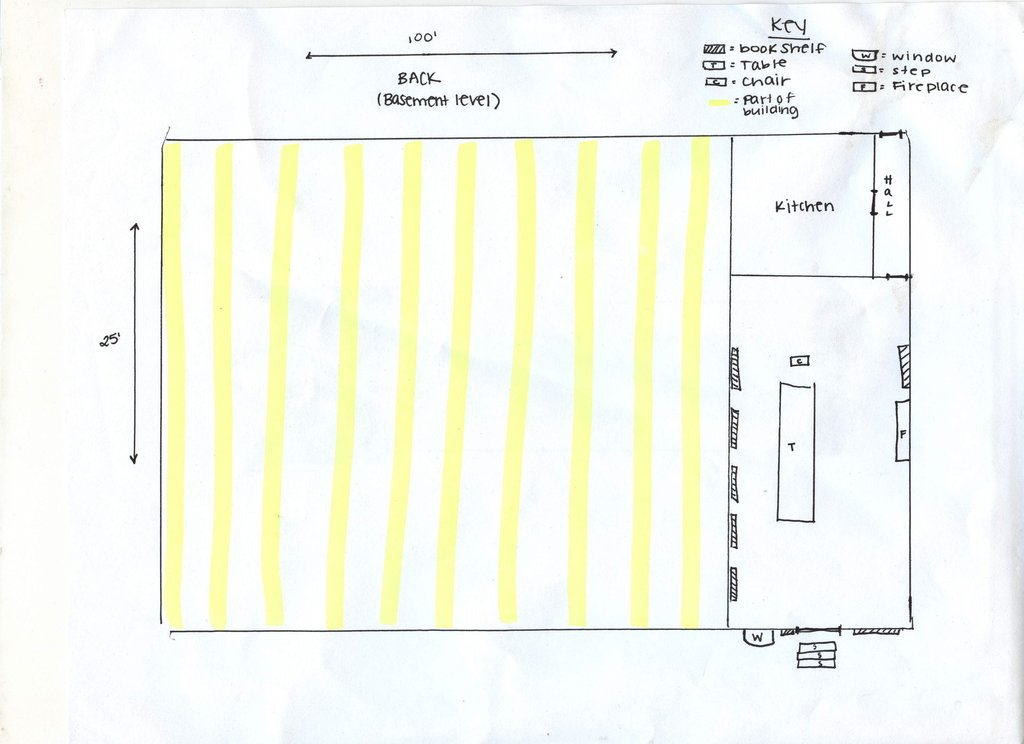 Feel free to run your cursor over the floor plan above. The black circles indicated stories and information about the rooms and furniture. In contrast, the green circles describe my own narrative and thoughts on the place and it’s decor.

The main sale floor was divided into sides by an eight-by-three table directly in the middle. At the center of this table was Steloff’s working desk. Additionally, the two sides acted as bookshelves. On this table, books were organized with the title and front cover facing upward, not with the spine facing the ceiling. Once this table became full, Steloff piled additional books on top of each other. Having two separate sides to the bookstore outlined two major goals of GBM, to allow customers a place to look at and purchase books, as well as provide customers a space to read, discuss, and enjoy those books. Lastly, this separation acted as the only control Steloff had over the traffic flow. Therefore, customers had the freedom to treat GBM as a place to quickly buy a book and leave, as well as a place to linger.

The side that exhibited the goal of finding and purchasing books had five five-by-five feet wooden bookshelves lining the wall.  Originally, books on these shelves had the front cover facing toward the center of the sales floor, not spine-outward. Customers would comment that although it made the small collection take up more space, it put a large focus on the furniture itself: “To be sure, the store didn’t look empty. You might have wondered whether the furniture was there to aid in selling books, or the books were in the background for selling the furniture. She could fill up about five five-foot shelves provided many books were displayed the wide-way—front out instead of spine out” (Rogers 64).

Arranging books in this manner changed as she added more books to her collection. Not only did the books line shelves standing vertically with their spines outward, they also layered horizontally on top of one another, piling on the top of the shelves until they touched the ceiling.  Although it was reported that as the store gathered more inventory, it appeared messy, Steloff had a distinct order in which she would categorize the books into sections based on topic or cost.

In regards to stock at this location, Steloff attended to a specific clientele interested in theater, art, and design: “Thus not preference but haphazard pressures turned her into a specialist in two profitable fields: art and theater. As Mischke had foretold, her customers educated her” (Rogers 74). While she focused her stock around her customer base, Steloff had a direct relationship with each book that became part of her original collection: “Once upon a time she had read every book she owned: the James, the Browning, and all those included in the original stock. But such a detailed familiarity couldn’t be kept up. It was impossible in spite of the fact that all the books were the kind she loved” (Rodgers 77). Keeping a relationship with her collection speaks the idea that things, like books, create identity: “…identity, whether cultural or personal, presupposes acts of collection, gathering up possessions in arbitrary systems of value and meaning” (Clifford 217). Before Steloff would allow these books to represent her and her business, she needed to familiarize herself with the collection.

The second half of the store provided more of a homey feeling, that that invited customers to linger, shop, and chat during their time at GBM. Although this side also had a five-by-five feet bookshelf, it hosted to other furniture commonly found in homes. One of these was a furnace. Although this furnace was not added by Steloff, it served multiple purposes in the shop. For example, while providing heat to the small sales floor, the furnace added to the homey environment. Another furniture item in the shop that added to the ambiance was straight-chairs. GBM started with only three chairs for customers, and during the late night hours they became an essential place for academic and leisurely conversation among actors and artists. Eventually, one straight-chair had to be used as an extension of the long middle table and began to hold stacks of books. While the chair gained a new use, Steloff realized the importance of having somewhere for customers to sit, and added a rocking chair to the space.

Steloff effectively utilized the front of her store as well. The three steps leading customers from the street toward the front door was surrounded by two bookshelves. These bookshelves held book jackets, pamphlets, fliers, photographs, etc: “The entrance is booby-trapped. On one side of book jackets in the show window distracts the eye…They can draw the incautious browser’s attention hazardously away from the couple of steps down, the ninety degree left turn and the half step up that guide him into the Gotham Book Mart” (Rodgers 5). This outdoor collection served many purposes for the bookstore. One of these purposes was to attract customers inward via colorful paper flaps blowing from the wind. In addition to the odd movements and colors attracting customers, many people walking by would ask about or comment on what happened to the outdoor collection when it started to rain or snow. Due to the frequency of these questions and comments, Steloff was able to give her storefront and herself voice before meeting the customer through a meaningful pun that followed the store through its advancement: “We take them in.” A second purpose was to have the storefront define the shop as a bookstore. This was especially important since this storefront was owned by a tailor before Gotham’s arrival.

Beside the bookshelves sat a three-by-three foot window display that jetted outward toward the street. Steloff put a small curtain in the window display to demonstrate the established

homey atmosphere. In addition, she themed the window display around popular or expensive books. Her emphasis on these books exhibited a hierarchy in her collection: “All such collections embody hierarchies of value, exclusions, rule-governed territories of the self” (Clifford 219). By keeping books that she defined as higher in the hierarchy in the front on display (in contrast to having low-value collections kept on outdoor bookshelves), Steloff identified herself and her store as a place where customers can find top value books. Her customers desire to purchase these books, in addition to her own drive to keep them in stock, reflected the idea that collecting displays a type of class and wealth: “But the notion that this gathering involves the accumulation of possessions, the idea that identity is a kind of wealth (of objects, knowledge, memories, experience)” (Clifford 218).  This projected wealth was used to determine the value of books, in addition to the value of the reader.

In this way, GBM’s original location was successful due to Steloff’s customers desire to own a book that represented their identity. The value of the book doing so, although  imposed on by Steloff, was created by customers based on rarity, topic, and price. Therefore, these books became projections of the customer: “Though art may seem to be, most fundamentally, “a projection of our mental images upon the world of things,” this is art that instead shows how weary that world has become of all our projections” (Brown 15). Furthermore, the open floor plan created by Steloff allowed customers the freedom to spend time in the area of the store that they associate their identity with, the bookshelves or the furnace.