Prepare to be overwhelmed. Mile High Comics’ Jason Street location is a renovated warehouse home to thousands upon thousands of comic books and paperbacks, a wide array of toys and collectibles, and more merchandise than any one person would ever need.

This megastore may have 60,000 square feet, 45,000 of which is retail space, but it leaves no room for a romanticized visage of how a bookstore is expected to appear. You will not find any baristas serving Starbucks coffee nor will you find cushioned chairs with armrests gently placed in a quiet nook. The store’s layout caters to a different type of literary consumer, one who enters the store knowing full well what they like and what they plan on finding it, with or without help from the staff. In this way, the customers who step into this store are a specialized group of people as any who don’t fit within the parameters of comic book lover, enthusiast, or aficionado can be deterred and avoid the store altogether. It is not with an elitist attitude. Rather, the megastore realizes the niche that it fulfills, the specialized type of consumer it caters to on a day-to-day basis. 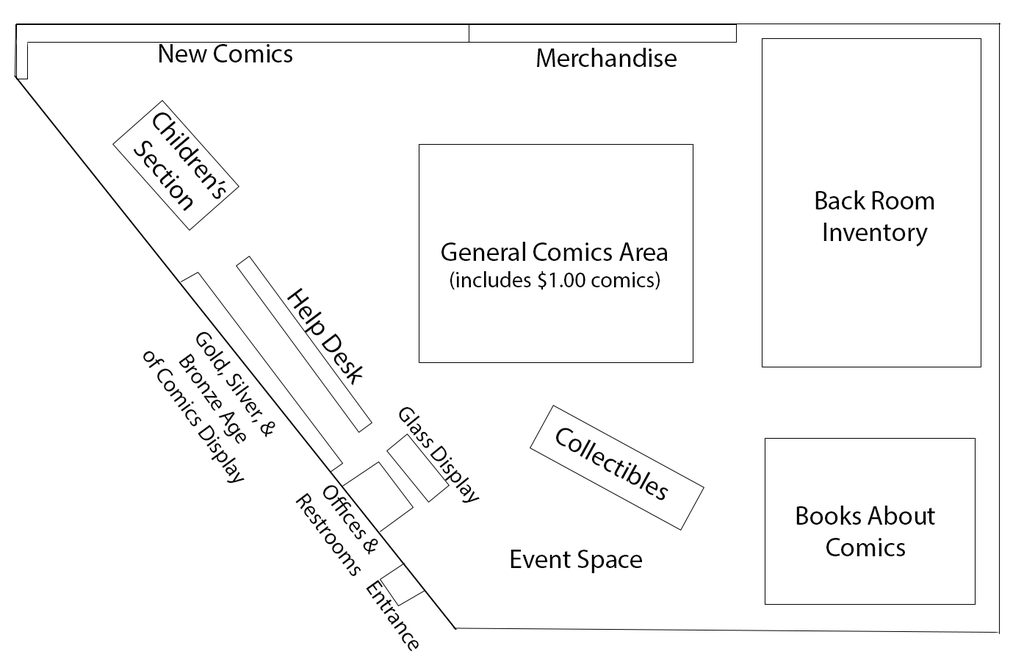 The store is a culmination of old and new comic books, collectible merchandise and trinkets, apparel, and more on one floor only and completely out in the open. Many of the comics can be viewed on multiple display tables soon after you enter the red door into the wonderland of a warehouse. They can be seen laid out flat, sitting upright, in packing boxes, or piled high and low. This is the general area of the store’s comics which boasts the sign “$1.00 COMICS,” no doubt a steal of a deal, and definitely a place to visit, but perhaps that’s not the reason you walked in today. Maybe you wanted to take a gander at the collectibles right next to the section housing the books about comics. Perhaps you came in to make a straight beeline toward the back of the store to peruse the new comic books section that wraps around the corner of the store, overtaking more than half the length of the wall. This way you’d be able to explore the merchandise adjacent to the new comic books, but you’d be bypassing the children’s section which is always worth a peek. You could have just wandered in by chance, knowing what you want, but you take advantage of the help desk that guards the hallowed display of Bronze, Silver, and Golden Age comic books. The only area off-limits to the public is the “back room” inventory with a look-but-don’t-touch rule. Feel free to roam all throughout the expansive store otherwise, as shown in this video. 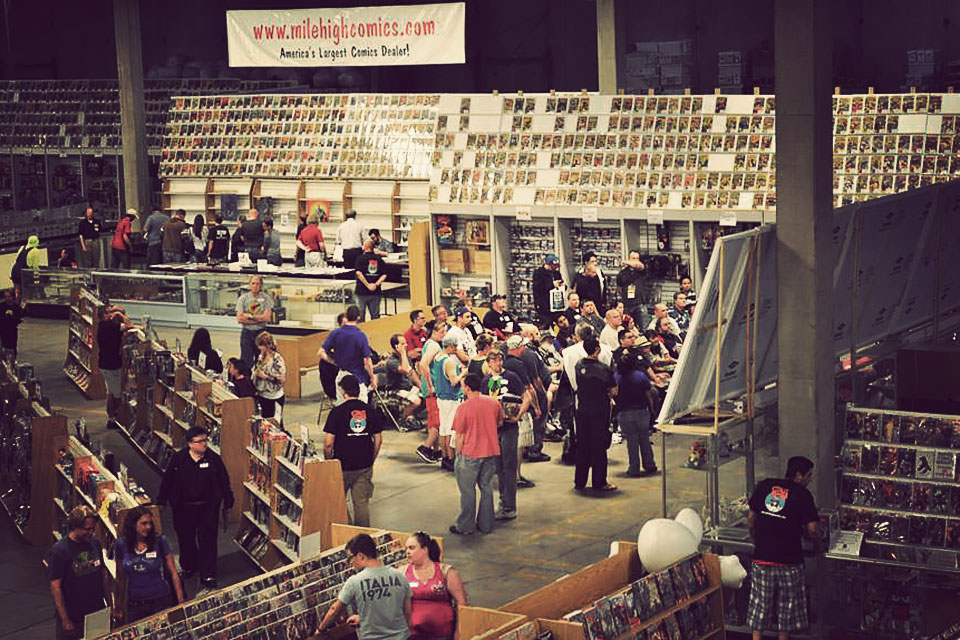 Comic books are the lifeblood running through this space, transforming it into something beyond a place of concrete and foundation. They are things that unite a myriad of people. Bruno Latour states that “[a] thing is, in one sense an object out there and, in another sense, an issue very much in there, at any rate, a gathering,” (2288); and the properties of comics as things make them a matter of concern for those who harbor a love for them. A comic book can invite any two people together, no matter how different they may be, and act as a conduit for conversation. This conversation between fans of the same comic book, regarding the characters, the art style, or even the artist, will establish a bond between those two people. However, the scope that a comic book can bring people together expands much farther than just two people to whole dedicated followings whether that’s for the book itself or the artist. Within these followings there is a sense of commonplace amongst the members and while they vary in race, class, sex, and identified gender, their shared love equates them to simply “fans.” And with this, the fans form a society amongst each other that is exclusive to those who too love comics as much as the other members, if not moreso. Their society is welcome to and expected, in a sense, to thrive within the comic book store where the materials needed to support and fuel them can be found. Viewing comics as objects does not detract from the sense of community that they can provide for the fan culture that absorbs them. One of the major aspects of comic books is their potentiality for being able to be collected. Serialized comic books tend to be collected for the sake of continuity while rare issues are obtained for the value, monetarily and culturally, that they possess. James Clifford discusses the act of collecting as a form of collecting culture, collecting life itself in his essay “On Collecting Art and Culture,” describing what a good collector does and what his/her collection represents. Reflective and tasteful, the good collector is able to know the history of the objects he/she is collecting while also being able to label them accordingly (219). The collection is what is valued while “any private fixation on single objects is negatively marked as fetishism,” (219) and this is true concerning comic book collecting. A major trait attributed with comic books is the act of collecting them. An entire collection holds more value than a single issue as the collection can compile the history of a comic book series, the progress of the artist, and the history of comics themselves. It is the complete cohesiveness of the series or story being told through the comic books that causes people, through sheer determination, to acquire as many that they potentially can. The megastore fulfills this desire in the best possible way by offering nearly all of Mile High Comics inventory underneath one roof. This is the reputation that the megastore does it best to uphold for its consumers and rarely does it disappoint in its endeavors.

Mile High Comics’ megastore boasts a display that takes the viewer through a chronological journey through the Bronze, Silver, and Golden Ages of comics, a history that spans nearly 50 years. The value of this collection is immeasurable because of the culture that it reflects, but also it solidifies the megastore’s claim that it is the largest comic book store in America and none can surpass it. It reflects the company’s own philosophy of remembrance for the origin of comics while the rest of the store shows where comics are headed as time moves along. The space is a testament to the importance that comic books have and will continue to have on both the art and literature worlds.