Where Is The Bible I’m Looking For?

Upon my second encounter with Nancy Nay, owner of Bible Depot in Sunbury, I asked her if there was anyway she would describe her store in terms of organization and content of the store.

“Crunchiness,” said Nancy, followed by a giggle as she just looked at everything around her. 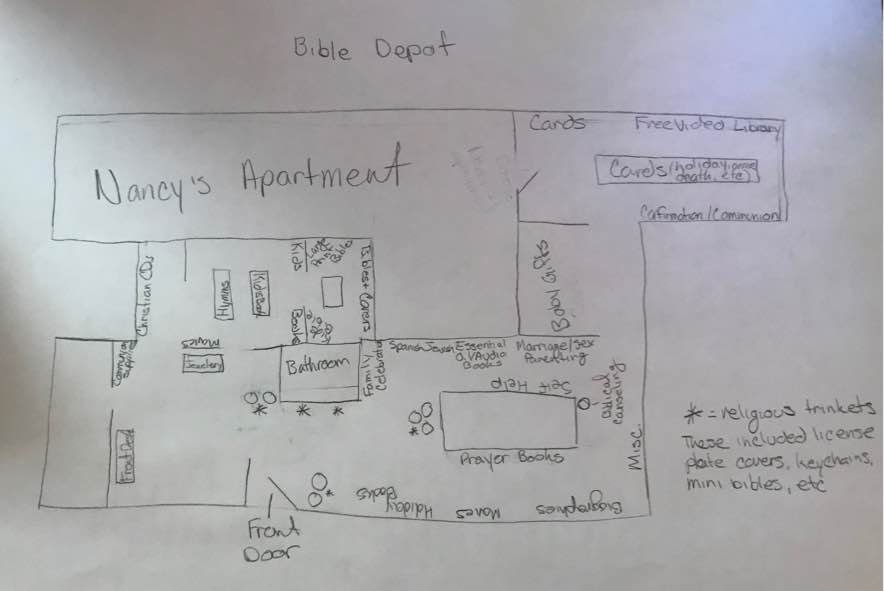 Reflecting on my first visit to Bible Depot, I had a very similar reaction to the way Nancy described her store. There’s a lot of content in a small area, and not all of it books. There’s jewelry and license plate covers and pocket bibles, and essentially anything a practicing monotheist would enjoy.

Since there is no exact  rhyme or reason to the flow of traffic within the store, customers just do their own kind of meandering to find their way through the store. At the entrance, you’re greeted with the last minute trinkets that you would find at any other bookstore. While it seems all too overwhelming right as you enter, the placement of all of this makes sense because of to the left is the main area of the store, which is where the front counter and store office are located.

Within the main room, there are various jewelry containers with necklaces and rings associated with Christianity. It’s not all just miscellaneous items. The wall next to the entrance is covered in an assortment of books, from themed holiday ones, to one of how to better oneself. Next to the front counter is all the supplies a pastor or priest would need for communion. Wafers and the little communion cups are all right next to the entrance to behind the counter, and into the back office.

Venturing from that part of the store to the next, the customer is brought into a larger room, that is separated by shelves and dividers that just add to the “crunchiness” of the store. Immediately from the front counter, is a space with religious movies and CDs, but also a children’s corner with popular Christian music and movies for kids. Some of them being Veggie Tales DVDs, which I fondly remember from when I was younger.

As the wall of CDs is on the opposite side of the main jewelry case in the other room, the flow of traffic is directed to a pair of shelves with popular church hymns. And after that section, you’re greeted by the bulk of the children’s books. These include everything from Bibles specifically made for younger children, to books about bulimia and anorexia, to coloring books.

While this is not the exact path I take during my visits to the store, I think it’s important to pause here, and just ask why? Is there actually a pattern in this store that I’m just not picking up on, or is there more of a reason to everything?

In Walter Benjamin’s book, Illuminations, there is a chapter called Unpacking My Library in which he reflects on the order to his own book collection. He talks about the “dialectical tension between the poles of order and disorder,” and how as a collector, his personal relationship with ownership and objects (Benjamin, 60). This tension between order and disorder is something that is exemplified perfectly in Bible Depot. Even though the customer is only scraping the inners of the store at this part in their patronage, there is so much to take in. Like why are the children’s book both user friendly, but also spreading the word about mental illnesses? Or why are these children’s book thrown by hymns, CDs, and DVDs? This apparent disorder to this part of the store, makes some sense. The digital media next to the hymns makes sense because some of those CDs most likely have some of the hymns on them. With all the children’s content, it only makes sense to have their electronic supplies within close proximity to their literature.

Continuing from the children’s section, there is what my group has deemed, “The Bible Room.” The name is more than fitting, considering that the only kind of books you’ll find in this room is the Bible. With a table in the center that has bookmarks and tips on how to open your Bible, the room can either be walked through clockwise or counter-clockwise. Both directions lead you on a chronological journey.

Going counter-clockwise, you stumble upon the Bibles that are specifically for younger children. Growing up, I clearly remember having a children’s Bible that told the stories this Holy Book has to offer, but in a much more PG way than the actual thing. From there, is a few of the many different versions of the Bible like King James and the Revised Standard Version. Towards the end of the customer’s journey around this room is the large print Bibles, something common for people who practice Christianity, but in their older age, their vision isn’t what it used to be.

Leaving this room, leads you out to the room with the front counter again, and then to the other half of the store, where the bulk of the books are. In this main room, there is a shelf in the middle with various kinds of literature, and shelves on the walls with even more Christian related books. Going through this counter-clockwise, the customer has holiday related books, biographies, and more movies on one side, and books practicing different kinds of pray on the other.

While all of this seems overwhelming, it makes sense. With the different Christian holidays, there’s different prayers that are associated with that time of year. On the other side of this middle bookshelf, are the self-help books. These vary greatly from mental illness to addiction. Across from the self-help books are books that offer insight on ways to raise your kids, save your marriage, and explain sex all within the boundaries of the Christian faith.

But why? Why are all of these sub-genres of Christian literature contained in this small area? In Clifford’s On Collecting Art and Culture, he talks about how culture strains towards aesthetic and autonomy (Clifford, 232). Though the store seems to be in some sort of chaotic stand-still, it’s autonomous. There is self-determination to the chaos but is only really seen with by physically walking through the store and taking everything. The aesthetic is within the physical building itself. Reverend Ney opened the store in its current location back in the 1940s, and raised his family right above the bookstore, which even now, gives it a very homey and welcoming feel to it.

Off to the back of the store, customers really get to see how much of a home this store really is to Nancy. The back two rooms, which one has gifts for newborn babies, and the other one with a shelf only for cards, and other wrapping around the room with objects that are filled with gifts from confirmation and graduation. There is even a public movie library where customers can take movies home with them for free. However, the most peculiar part of these rooms, is that you can see Nancy’s apartment. The back door and window are centered in these rooms, and customers can even see her chihuahua dog through the glass.

Leaving these rooms allows the customers to walk through the other side of the main book room, which has shelves with various kinds of materials. Most interesting, is the shelf dedicated specifically to Jewish items. The back story of this being that Nancy’s father, whom she never met, was Jewish, and her mother told her about him on her death bed. Clifford makes note that there is a specific form of historical narration through every culture’s idea of collecting (232). The Jewish section of Bible Depot most notably outlines this statement.

Though the goal of this post is to bring some clarity and connection to the different sections in Bible Depot, there are still some questions left hanging. Many of which focus on the flow of the store, and if there could be a way to reorganize it, to give it more ethos and give the customer a better understanding of the content within the blue walls of the house.