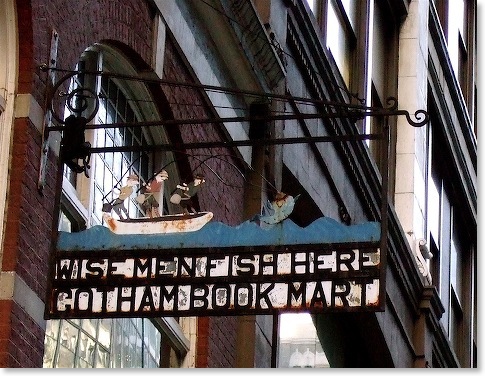 The sign that marked the entrance of Gotham Book Mart for decades.

Though today the bustling jewelry district in New York is a seamless stretch of store after store selling watches and cheap diamonds, there once stood a hub of literary culture among the hawkers and rampant consumerism. Gotham Book Mart, an oasis in a city overrun by the need to rush and shove and scramble to the top, was a place to slow down and read a book or two. You could chat with the employees about their favorite books or maybe meet a famous literary great such as EE Cummings, Christopher Morley, Dylan Thomas, or JD Salinger. There were book clubs and literary societies to become a part of, as well as readings and performances and garden parties. All of that ended in 2007 when the iconic store went under, putting an end to nearly 90 years of operation. The following timeline shows the key points of this store’s inspiring past.

Frances Steloff, a Jewish woman born in poverty in Saratoga Springs, opened the book store in 1920 in a tiny basement room in the Theater District of New York City. She had formerly worked in a department store selling magazine subscriptions and then took up several clerk positions in bookstores, which probably inspired her interest in opening up her own bookstore. Many of her first customers were actors on Broadway or other theater people who stopped by after shows, made possible because Fanny set her hours at 9 AM to 12 AM.

She quickly built up a loyal customer base, due to her desire to help customers feel at home and find what they were looking for. The store moved to the Diamond District in 1946, then not yet known as such as the jewelry industry there was still developing. There it truly developed its heritage as a center of literary appreciation. The bookstore was a place of more than commerce but one where the reader could feel a part of something larger. As Tim Cresswell notes in Place, “place has become a political symbol for those who want to fight against the ever-present power of global capitalism” (Place, 54). That’s not to say that Fanny Steloff and her clientele were anti-capitalist but simply that they shared the belief that there was something more important than simple book-selling that the bookstore was meant to practice.

A sense of community was built in the little store on 47th street which would not have been possible without Fanny’s intense focus on promoting authors, poets, artists, and playwrights. She fought against censorship by buying and displaying banned books in her stores, which encouraged nationwide conversations about what censoring books meant for the American people. More than just advertising their work in her store, she helped writers in need in other ways, such as lending money, finding them places to stay, or offering them jobs in the bookstore.

The Gotham Book Mart built up an atmosphere where, according to W.G. Rogers, “some of the decade’s best minds relaxed in congenial company”. It was a place to shake off the hardships of being a writer in difficult times and simply talk about what enamored writers to the trade in the first place. As well as the political nuances surrounding place which focused on a separation from the consumerist culture dominant in the big city, Cresswell also mentions that “place, at a basic level, is space invested with meaning in the context of power” (Place, 67). For the people who frequented the garden parties and relaxed gatherings of literary minds, the Gotham Book Mart was more than just four walls and more than just the plethora of books themselves. The bookstore moved four times in its existence and yet maintained the same feeling that goes beyond simple location. It was the interpersonal relationships and feeling of belonging that powered the nostalgia many feel for the Book Mart of the past.

In 1967, Fanny Steloff sold the bookstore to Andreas Brown but continued to live in the apartment above the store and worked helping customers for the rest of her life. She was eighty at the time, yet engaged with her customers in the same way she always had, offering advice and chatting about up-and-coming writers. She also remained as a business consultant because of her economical and thrifty approach to book-selling that had kept the store afloat during the tough times of the Great Depression and post-war eras. 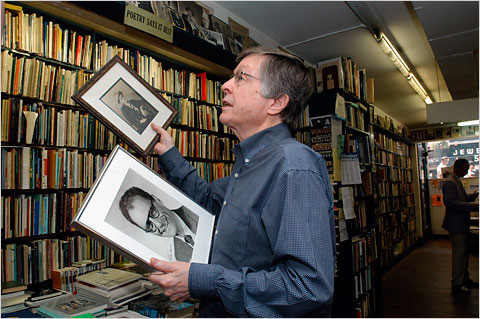 Andreas Brown prepares to move the store to its new location in 2004.

Andreas Brown continued to promote the work of authors and provide a literary atmosphere in the iconic store long after Fanny’s death in 1989 at the age of 101. But among the cut-throat street of jewelry hawkers and diamond salesmen, the Book Mart barely got by. In 2004, the store was moved to 46th Street, though it only survived there for three years before going out of business. Many argue whether it was the risky investments made by Andreas Brown, the intense competition with chain retailers, or simply the declining interest in literary culture that caused the Book Mart to fail.

No matter the cause, Gotham Book Mart’s legacy ended with a city-held auction where about $3 million dollars worth of industry was bought for $400,000. Later the next year, an anonymous donor gave 200,000 items from the store to the University of Pennsylvania, which plans on cataloging and making them available to the public. Of course, these glimpses of the past will never be the same as it felt to attend the actual bookstore. That feeling of significant place and culture is lost to the past, visible only in black and white photographs.